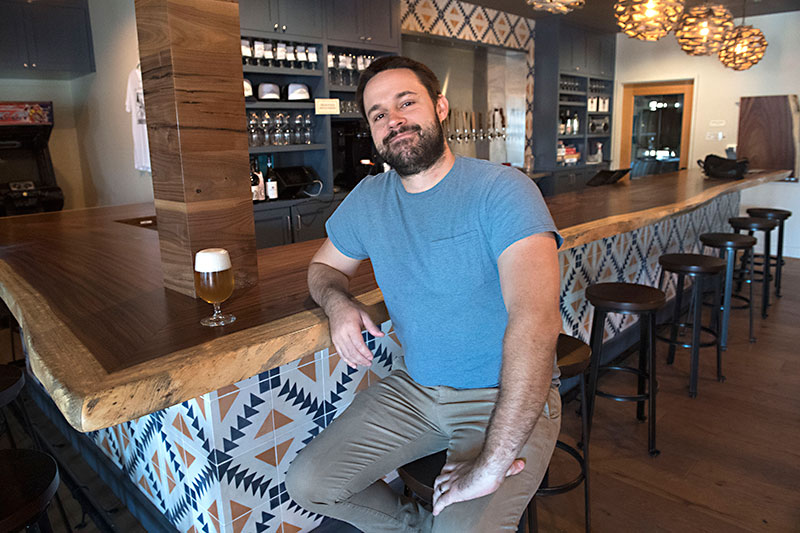 Way back in 2015, in the days of using razor-sharp stones to hunt wooly mastodons, we speculated that Oddwood Ales – who was "gypsy brewing" from a sliver of space in North Austin's Adelbert's Brewery – would be Austin's next great beer source. Then, a year later, we anticipated that Oddwood's impending departure from its parent operation into their own brewing dojo would be one of the Top 10 beer developments to look forward to in 2016. Boy, were we prophetic! Comically early, sure. But still prophetic.

Two years later, and only seven weeks into full service, I'm sitting in Oddwood's cushy taproom, drinking flawless pale ales and feeling a rush of contentment listening to Weezer's "Only in Dreams," which plays at a very reasonable volume overhead. From multiple visits to Oddwood, it's clear the brewery has cleverly customized an experience for both the contemporary beer drinker and a generation of nostalgia-consumed Austinites. Evidence: There are classic beer recipes manufactured with innovative technique; a rustic barroom accessorized by touches of nouveau design composition; an old tube TV set that hosts classic N64 games and vintage VHS tapes while a flat-screen showcases an NBA playoff series a mere glance away. And of course, there are healthy auditory doses of classic indie icons like New Order and Weezer intermingled with LCD Soundsystem and Childish Gambino. I'm half expecting an Edward 750mL-hands Revival Night.

“We learn something new every time we make a beer and try to roll that forward into future beers.” – Taylor Ziebarth

Yet nothing is more evident of this generational concordance proposed by The Full Oddwood Experience than their coarsened head brewer and co-founder, Taylor Ziebarth. Despite the abundance of experience from Adelbert's and a simultaneous tryst with his wildly popular side project, he still has the drive and ambition of a college undergraduate.

With the level of natural talent Ziebarth displayed in his two 2015 bottle releases, Oddwood Saison and his American wild ale Taming the Savage Heart, Oddwood's current domicile can be favorably compared to the moment Aaron Franklin ditched his wheels in favor of his own brick-and-mortar. Whereas Franklin dazzled with smoke and beef beside an abandoned body shop, Taylor, together with co-founding sibling, Brett Ziebarth, had a grand vision to express his expert-level control over wild fermentation on a larger scale than what he was able to accomplish under the confines of limited space at Adelbert's. But in a somewhat surprising pivot, Taylor has hypnotized his first two months' worth of customers with his ability to control the bitterness, aroma, and flavor of overtly hopped beer. More specifically, Oddwood's pale ales.

"Our palates shifted over the past few years, and I think the current crop of beers reflects this," says Taylor. "We always intended to make some hoppy beers to complement our sour and funky stuff. Straightforward and vibrant beers are what we are shooting for: saisons, wild ales, pale ales, historic-ish stouts, and sometimes, a lager. That being said, sour and funky beer will make up a bigger part of our portfolio this summer once our barrel program starts to ripen."

But while their wild ales continue to mature in barrels within the gauntlet that comprises the brewery's cryptic production chamber, Oddwood has continued to gain a following with its wall of brightly bittered beers. First Day of School, Taylor's debut pale ale that combined Mosaic, Citra, Cascade, Columbus, and Simcoe hops, provides a profound look of incredulity to its inaugural audience.

It's in line with the brewing trend of the moment, but First Day of School has an uncertain future as a frequently resurfacing jewel, replaced in the rotation by other glamorously hopped-up versions of the styles like Eight-O-Eight, an aggressively-hopped West coast style pale ale that uses Mosaic, Citra, and Galaxy, and also Sports Related, a Citra-hopped, crisp pale lager. Their power ballad, Wolf Shirt, is not only a gorgeous, double dry-hopped American pale ale thunderclap with a full array of spicy tropical notes, but it also co-wrote the guitar solo for "November Rain."

"Basically we are working through a lot of different brewing ideas and techniques," offers Taylor. "The brewery area was designed with flexibility in mind. We try to keep a balanced tap list which naturally [prompts] us to brew some styles more than others. We learn something new every time we make a beer and try to roll that forward into future beers."

Oddwood appears to have gained a foothold into the crevice of Austin's exceedingly congested brewing landscape. While Taylor is granted freedom to explore his creativity from within the brewing operation, Brett is the front-of-house talisman who toggles between the roles of general manager, social media bellman, Spotify playlist curator, and official taproom artist, as denoted by his various showpieces adorning Oddwood's interior. In general, there hasn't been a better doublet like the Ziebarths since the Gallaghers were charming England with their own brand of consumable art.

Meanwhile, chef Ryan Dunn curates Oddwood's Sicily-inspired food menu with a rangy slate of thin, bar-style pizzas full of that cheesy, fatty slickness that liquefied hops demand as a consumable companion. If you can fight off your regular pilsner and Doritos diet for one measly night, Oddwood's food menu is a not only a healthy side business, it's actually one of their best features. The Gallaghers never offered the world strombolis, did they? Plus that's just a fun word to say during a food order. Stromboli.

"Now that we are in a nice groove, we are going to start rolling out different pies to keep things fresh and seasonal," Taylor adds.

Of the four area breweries that opened during the two-month tempest of February/March 2018 – Brewtorium, Skull Mechanix, Vista, and Oddwood – this East Austin slugger got to hit the piñata last, spilling a healthy influence onto the local beer scene and being carried off like the heroes of game 7. Maybe that was just fortunate timing, but then again, the beer game is all about great timing. When the craft beer nerds all realize that the last brewery to open was not the gritty centerpiece that was lacking in Austin's brewing scene, they move on to the next one. While Oddwood still has that new brewery smell, we can easily predict that it will stay marvelous and relevant for a very long time.

"We have a decent bit of capacity and have been holding off on distribution," says Taylor. "[But] we have four serving tanks plus a small keg fleet which allows us to be flexible [with our future plans]. Our manic brewing schedule might slow down after we start bottling and distributing more."

That would mean Oddwood Ales in the retail marketplace again, which is a universe we would like to live in. In the meantime, the brewery also offers growler fills to-go given they hold a brewpub license. Oddwood's superpower, however, is bewitching your soul to enjoy a tulip of their beer in their own taproom.

"I am a firm believer in perception being a reality." Taylor adds, "Especially when it comes to food and beverage. My fondest beer memories are often linked to their surroundings [and] we really wanted to create a warm and cozy environment to serve our beers. We poured a lot of love into our little bar."