The South American cuisine is having a moment in Austin's scene Peruvian cuisine is having a moment in the Austin limelight. There's the Manor Road newbie, Yuyo, where an extensive menu features jewel-like ceviches, pisco sours, and gorgeous haute takes on Lima street food. We've already mentioned how smitten we are with Eastside brunch bus Killa Wasi's considerable charms, and their masa-breaded chicken & quinoa waffles and the breakfast sandwiches smeared with aji amarillo. But we thought it was time to return to origin story locale of local Peruvian fare – those far-flung bastions of roasted meats and fried yuca, where the plantains are plentiful, and there are posters of Inca Kola on every wall. That's right, kids. It's time for a pilgrimage to Inka Chicken. 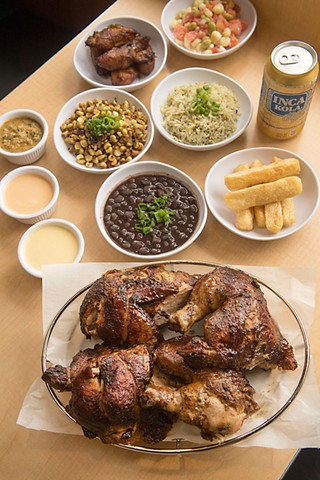 It's a little tricky for first-time visitors to find Inka Chicken: It's tucked away from the I-35 access road traffic and hidden between a gas station and an oddly placed hotel. But you know you're exactly where you're supposed to be as soon as you get out of your car. The air outside the restaurant is thick with the intense smell of burning wood. There's a drive-through window here, and while I've never been patient enough to actually wait and take my chicken to go, I can imagine what a potent air freshener it must make. Even on a Tuesday afternoon, there is a mini traffic jam, cars stretching out of the parking lot to the street. Inside, Inka Chicken feels like a fast-casual chain restaurant, although it's the only location. Decorating the signs and walls are images of a chicken roosting inside of a red hot flame and professionally presented posters advertising their specials (they cater!). It's a surprisingly peaceful atmosphere – the walls painted earth tones, panpipe music softly piped in over the PA. If you wait long enough, I guarantee you'll hear a melodious cover of "El Condor Pasa." There are plants everywhere and handwoven textiles to admire while you wait in the substantial line, which, thankfully, moves fast. Before you know it, you're at the front, ordering (what else?) the chicken, which you can witness slowly turning on its bank of spits. The counter-service employees unroll the heat-trapping foil from the rotisserie, filling the restaurant with the smell of smoke and rendered fat. A quarter is more than enough. As for sides, if you're smart, you'll go for the yuca fries and fried plantains. Ask for the trio of sauces, so you can mix and match on your plate. It's not rocket science. It's chicken. 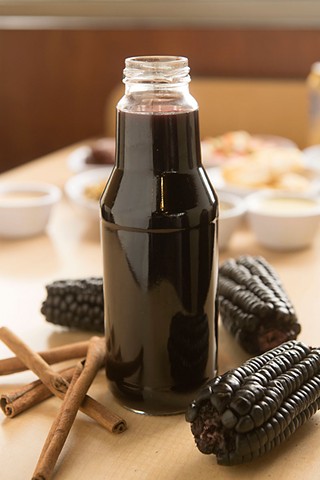 And oh, what chicken it is: marinated for 24 hours before being roasted over the open flame, and basted both by the dripping grease of the chickens turning on the spits and by what tastes like an herbal chile garlic paste stuffed underneath the skin. The meat is unbelievably tender. This is the kind of chicken you could eat with a spoon if you wanted to. It falls right off the bone in delicate slivers. Even the thickest parts of the breast are moist, yet the dark meat is fully cooked – no easy feat, as any home cook who has attempted to roast a chicken can attest. The crisp skin is roasted until it shatters in your mouth like a schmaltz-fried potato chip. The yuca fries are similarly outstanding – pillowy and a little mealy, a compellingly bland backdrop for all that tasty chicken grease. While we were less impressed with the plantains, which were oily from sitting out under the heat lamps for a while, they did have a lovely caramel-edged sweetness which went beautifully with the savory roast chicken. At the recommendation of the cheerful young man at the cash register, we got all three sauces: the mild aji amarillo and the medium aji rocoto, both mixed with mayo, and the spicy huacatay and jalapeño, pureed with cilantro and mint. Mixing them together on the plate in a grotesque-looking pop art swirl by dredging yuca fries into the spicy, creamy concoction is one of the most satisfying things you can do for your chicken. We especially liked the combination of rocoto and huacatay, combining herbal punchiness with the peppers' citrus spice.

If you're not a chicken person (why are you here?), but you're still in touch with your carnivorous side, the grilled chorizo sandwich – the only non-chicken item on the menu – is an excellent alternative. The bread is sweet and slathered with a mayo jalapeño sauce that it soaks up like a sponge. There are a few scraps of lettuce and some thinly sliced tomatoes, but the real star here is the chorizo, which is fatty and almost sweet, black at the edges from its time on the grill, with a thin, crispy skin that pops when you bite into it. Oh, and it's perfect paired with one of their homemade juices. We particularly liked the bracingly sweet passion fruit limeade, but the chicha morada – a blend of corn, pineapple, apple, and cinnamon that is advertised here as an "ancient Andean healing drink" – has an appealing earthy sweetness.

As we used the bread from our grilled chorizo sandwich to mop up the last dabs of chicken grease, my companion gestured at the cars parked at the Sonic drive-in we could glimpse through the window. "Do those people not know about Inka Chicken?" she asked. I get it, there's a time and a place for hot dogs. But with Peruvian food gaining a stronger foothold in Austin, hungry people need to know about Inka Chicken.