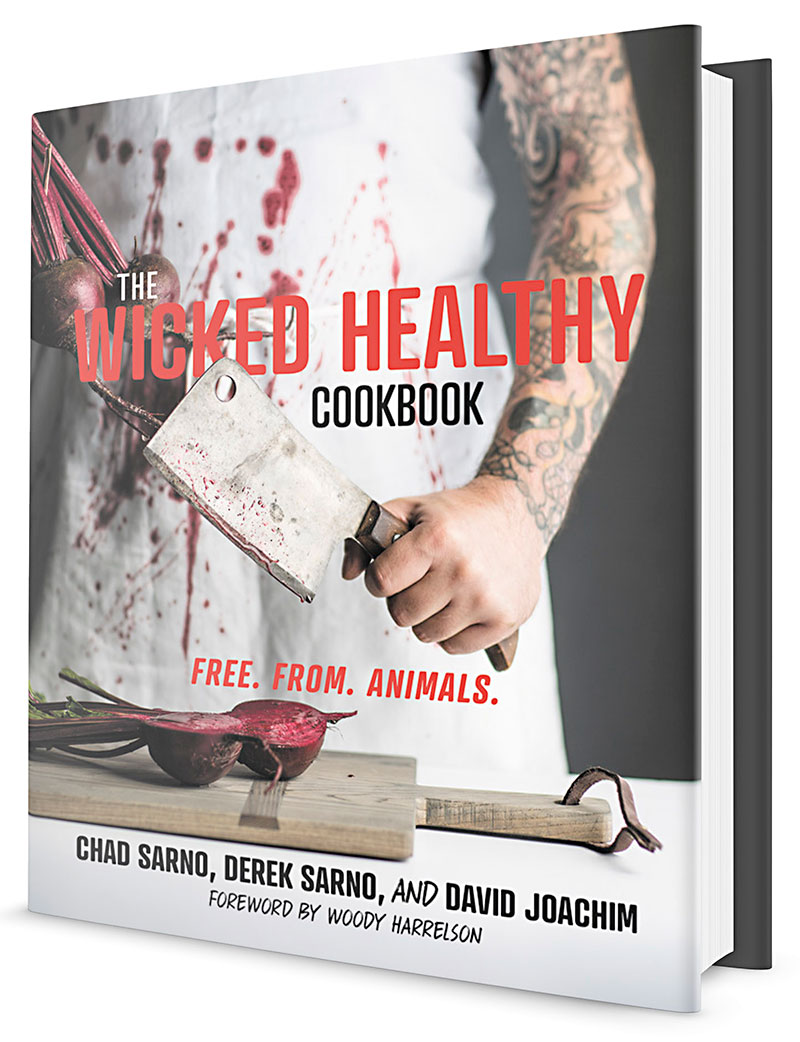 A salad, with dressing on the side. Steamed cauliflower and carrots, sans salt. A monthlong juice fast. Deprivation, cheat days, counting calories. This is what comes to mind when many folks hear the word "healthy" – diets full of good intentions that crash and burn when maintaining strict eating regimens turns out to be harder than dieters anticipated. But that's not what Austin-based brothers Chad Sarno and Derek Sarno mean when they start throwing around that word. They're all about balance, having fun in the kitchen, and making delicious real food that just happens to be good for you.

That's where their new labor of love, The Wicked Healthy Cookbook, comes in. It's a common-sense approach to eating healthier because the Sarno brothers believe the field of nutrition is far too confusing and reductionist. They prefer a simpler approach: Shoot for eating 80% healthy, allow yourself to be 20% wicked and indulge a little, and you'll end up 100% awesome. "What good is a diet where you starve yourself, feel miserable, then go right back to eating the same thing or way as before? Healthy to us means taking control of what goes in our mouth, not about starvation or choking down food that tastes like shit," the book declares.

There’s no preaching, there’s no soapbox, these guys just want to show people what good food is all about.

In this case, healthy means plant-based. All of the recipes in the 320-page cookbook, which is full of vibrant imagery and mouthwatering descriptions, are made from plants. Search high and low on every page (except for in the foreword written by Woody Harrelson) and you won't find the v-word. You know the one I mean: vegan. Why? They're not trying to convert anybody, for one. There's no preaching, there's no soapbox, these guys just want to show people what good food is all about. "We're plant pushers, not meat shamers," Chad said. "We don't tell people what not to eat, but what to eat."

Maybe most importantly, they want everyone – even omnivores – to give Wicked Healthy a go because their research shows that anytime a vegan or vegetarian label is slapped on a menu, meat-eaters tend to shy away. But plant-based? That's not nearly as intimidating and extreme. After all, the Sarno brothers are trying to meet people where they're at when it comes to flavor.

So what are these wicked plant-based flavors? Chad promises there's something for everyone, from skilled chefs to even the most novice home cooks. There are recipes for sloppy BBQ jackfruit sliders and margherita pizza, corn dumplings and fudge brownies, and aside from a few recipes with fabulously exotic mushrooms (Derek is a self-professed mushroom whisperer), just about every ingredient between the bindings can be found at a local supermarket.

"We want to open people's eyes to the versatility of plants," Chad said. "Show people that plants are far beyond a side dish."

In fact, they are spreading the Wicked Healthy word worldwide. Derek recently left Austin to launch the bros' Wicked Kitchen ready-to-eat meal line at Tesco stores in the UK. Here in the States, Chad is counting down the months to when Good Catch, the chefs' new line of fish-free seafood, hits grocery store shelves.

Both guys have diverse and varied backgrounds. Derek has owned several critically acclaimed restaurants, founded a sustainable farm, even worked as a chef at an international Tibetan Buddhist monastery in upstate New York. Chad has been a culinary educator, a VP of plant-based education, and helped launch the first international brand of vegan restaurants in Istanbul, Munich, and London. They have both lived and worked all over Europe, but it wasn't until they teamed up at Whole Foods in Austin – Derek as the Senior Global Executive Chef; Chad as the Global Healthy Eating Coordinator and media spokesperson – that they realized they enjoyed working together. The brand, Wicked Healthy, was born.

The Wicked Healthy Cookbook hit shelves on May 8. On May 21 at 6:30 pm, Chad will be at the shiny new demo kitchen at the Austin Central Library talking about the book, recipes, cooking techniques, and whipping up a little something to show everybody some great new ways to enjoy eating plants, and how wicked eating healthy can be.