A Different Kind of Barista at Empowered Coffee 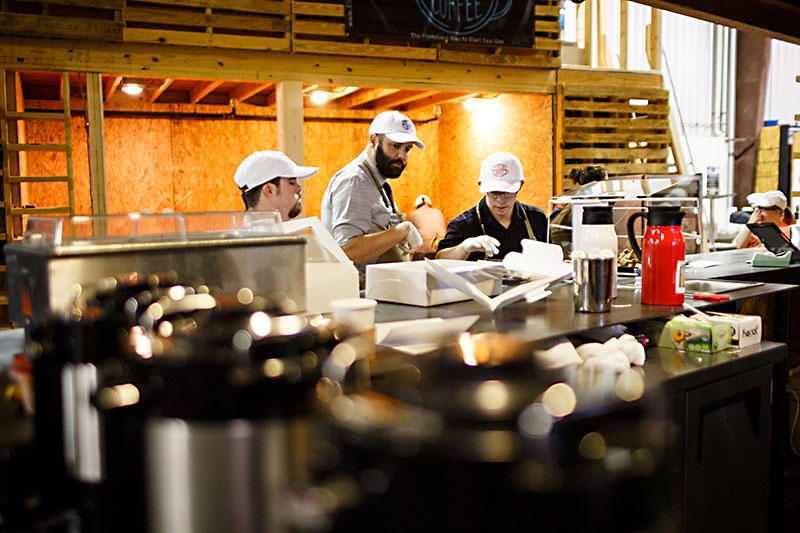 Not every coffee shop serves as home base for pretentious attitudes and pseudo-philosophical debates about the nuances of Kanye West's latest rant. It's refreshing to skip the latte art and artisanal snark and just find a good cup of joe served with a warm welcome. That's exactly the kind of business the team at Empowered Coffee believes in: simple, inclusive, sustainable. Everyone working at the new, certainly not third wave, coffee shop has an intellectual or developmental disability, and every employee is a valuable asset to the team.

At Empowered Coffee, located inside the 410 Speed Shop, you won't find a bearded and tattooed barista raking in tips to pay for their band's next tour. The cavernous warehouse serves as both a training facility for Crossfit junkies and a retail outpost for Rogue Running, but the latest addition is a humble coffee shop tucked underneath a lofted wooden treehouse office space. The smells of barbells and the sweaty athletes lifting them is contrasted by wafts of fresh, fair trade Third Coast organic coffee, brewed and served by an inspiring staff of young baristas.

The idea for the project began when Dr. Kimberly Davis, who operates the sports medicine practice RunLab out of the same building, launched the nonprofit Kayleigh's Club to help improve the physical fitness of individuals with intellectual disabilities. The success of the program, which culminated in three IDD (intellectual or developmental disabilities) teams competing in the Zilker Relays, led her to expand beyond athletics and into general career skills. "I have seen the dedication and ability to succeed that these folks have when a clear goal is set," says Dr. Davis. "With goal-oriented and picture-based training modules for each position, we have been able to complete on-the-job training in the same amount of time it would take a typical employee."

It's naturally a very different experience than other third wave cafes, where a multitasking barista dances between the espresso machine, pour over coffee station, and pop culture-laden conversations with regulars. Because of safety concerns and complicated maintenance, there's no espresso machine at Empowered, just auto drip brewers, and for payment, the cafe only takes cards, no cash. Their no-frills style has attracted a steady stream of regulars excited to chat with the baristas.

William Mullican, a 21-year-old with Down syndrome who commutes from Pflugerville, is so popular that customers ask to take selfies with him. He loves making coffee, and in true coffee geek fashion he doesn't add sugar or milk. Mullican left his previous gig at Russo's New York Pizzeria in the Arboretum to learn the skills necessary to open his own restaurant serving breakfast foods like pancakes, waffles, and peanut butter French toast. Part of that on-the-job education comes from a transparency seldom seen in other cafes. A white board lists the day's sales numbers for both employees and the public to see, including operating costs and whether the coffee shop is turning a profit. 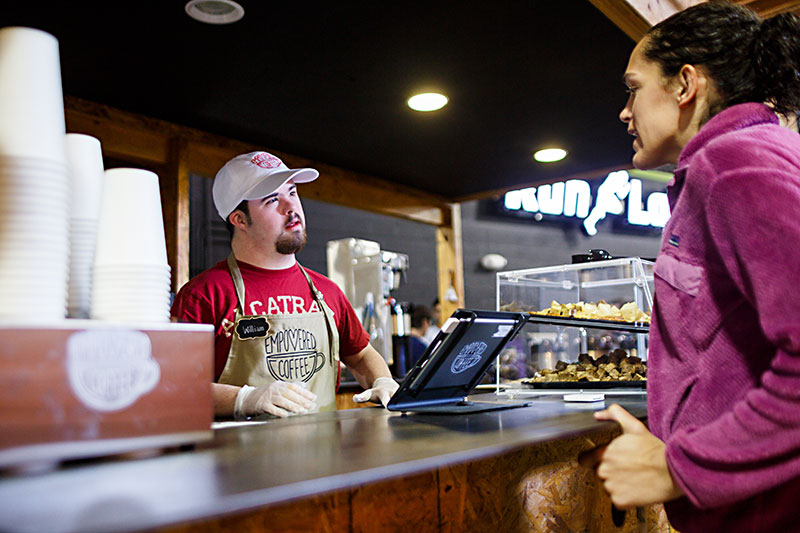 "They all know how many tacos we sell every day," says manager Whitley Priddy. "It also makes customers at Rogue a little more aware of how we're doing." She says the biggest challenge is getting customers in the door, a problem that caused the two previous coffee operations in this location to shut down. Dr. Davis agrees. "We have had an outpouring of community support via social media with people offering their time and support, which has been absolutely amazing. But at the end of the day we still need to be able to sell coffee to make this a sustainable business and continue creating job opportunities."

Part of their road map to profitability includes merchandise and catering operations, but for now they're hoping the crew of seven baristas can continue to drum up business and attract more regulars. If Mullican is off (he works Wednesdays and Saturdays), you might find his best friend Haley McDaniel, an affable half-British 22-year-old who joined Empowered after a job at Kerbey Lane, behind the counter. Unlike Mullican, she's not a coffee fanatic (she prefers hot chocolate), but she loves serving brew, especially during busy weekends when runners congregate at the shop after a race. While it may seem like there's a big contrast between Empowered's crew and the beefed-up athletes training on-site, they've got quite a bit in common. Both Mullican and McDaniel will participate in this year's Special Olympics in golf and tennis. Want to help them get there? Tip generously.