At home on the ranch 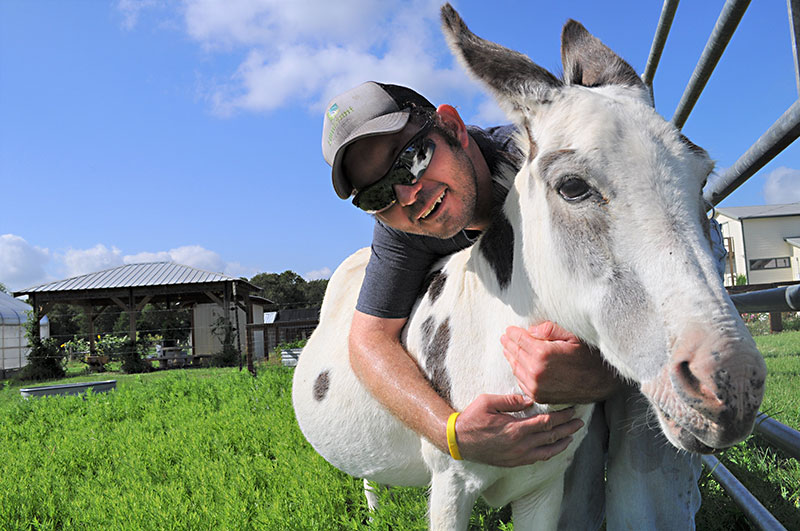 Courtesy of Down Home Ranch

A long dirt road shaded by tall spruce trees leads to Down Home Ranch. There, you'll find large greenhouses, a learning center, and a shop selling memorabilia, fresh eggs, fruit, jelly, and hydroponic tomatoes and lettuce. Mini horses, 35 laying hens, and a few longhorns greet guests. It's a legit working Texas ranch, but the primary mission is providing a caring home for a community of residents with intellectual disabilities. "They need more than safety and a roof over their heads," says Jerry Horton, founder of Down Home Ranch. "They need support, caring, respect. They need to be valued."

Horton and his wife, Judy, began the project shortly after their fourth daughter, Kelly, was born with Down syndrome. As academics, they "read every book in the English language on it," and soon realized many people believed the prospects for those with such disabilities weren't promising. Not thrilled with the limited local options, the couple found inspiration from research about "intentional communities" such as Camphill in Copake, N.Y.

Horton, who has since separated from the ranch to work on new special needs housing projects, says programs like theirs are vital. Some epidemiologists believe there are about 5 million people with intellectual disabilities in the U.S., many living with aging parents due to the lack of affordable housing and community programs like Down Home Ranch. "What is going to happen, where are they going to live?" Horton asks. "It is a profound social, public policy issue. There is insufficient housing and insufficient public support – meaning money – for people with intellectual disabilities."

The Hortons' burgeoning business became incorporated in 1989 and they moved into a used, two-bedroom mobile home on a newly acquired 215 acres of land in 1991. It was isolating at first – just the family, a donkey, and thousands of fire ants. But by 1995 their first program – Ranch Camp – was underway, with 13 campers utilizing tents and cots borrowed from a supportive nearby Texas National Guard air base. For years, it was an opportunity for ranchers to explore and share in the community and allowed parents to go on vacations knowing their children were in good hands. Ranch Camp was discontinued in 2014, but the community they had longed for was finally coming to fruition. Courtesy of Down Home Ranch

In 1997, donated greenhouses allowed Down Home Ranch to begin growing and selling plants. Brian Loer, DHR Lead Grower, says they started with poinsettias, beginning with 2,000-3,000 plants, and at the height of their sales, up to 15,000 plants. Some greenhouses were repurposed to cultivate more crops, including blackberries and pecans, to sell at the gift shop, local restaurants, and farmers' markets. Their new residency programs – where community members are encouraged to apply for greenhouse jobs to hone horticulture skills – provide meaningful work for the ranchers, "not just busy work. We want them to do something that matters," says Loer. Currently there are 36 residential ranchers and seven more attending day programming only, for a total of 43. They distribute 200 to 300 pounds of tomatoes, 30 to 50 heads of lettuce per week, and around 700 jars of jelly per year to customers in Elgin, Taylor, Bastrop, and sometimes Austin.

The Down Home Ranch menagerie includes mini-horses, laying hens, donkeys, longhorns, and beef cattle. Similar to the greenhouse division, Russell says she has hired a crew of four ranchers to feed, clean, and care for the animals. "We kind of learn together sometimes," says Naomi Russell, DHR animal care specialist. "I don't know a lot about cattle, but I do have one of my ranchers that knows quite a bit because he was raised on a cattle ranch and his mom raises cattle, so he has taught me quite a bit."

All of the money made from production is used to support the ranch and the programs available for the ranchers, allowing them to show donors they "are not just sitting here begging," but instead "are doing something to earn it," says Loer. The ranch also helps facilitate access to special opportunities. "Most of our ranchers participate in multiple sports," Loer says. "[Bowling] is one of their biggest Special Olympics sports and not only do they get to go to competition, but for the month or two before the competition we can send them down [into town] once a week to practice."

John K., a rancher who joined Down Home Ranch seven months ago, had been living in the city most of his life. He says, "I don't know much about the country life except that I love living in the country. I am trying now to learn what I can." John immediately liked living at Down Home Ranch, and working in the greenhouse (currently in maintenance), and though he says he still can't tell his plants apart, he has learned a lot about their care. "I enjoy the ranchers here, the staff, and all of this life and nature here on the ranch that you don't see in the city," John says. "You don't see deer much in the city, and if you are sitting on the porch you don't hear coyotes out in the distance. It is like music to your ears."

A version of this article appeared in print on April 27, 2018 with the headline: At Home on the Ranch

Afridrilles, Shoes From Africa to Austin and Beyond
Local nonprofit helps children with special needs via Kickstarter