Aeroponics Are the Future for One Austin Urban Farm

Farmhouse Delivery is all grown up 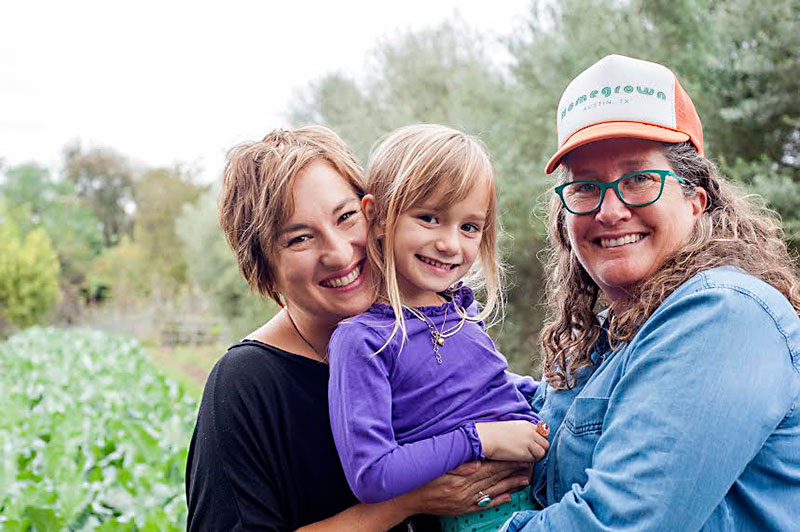 When Stephanie Scherzer bought her little slice of the Eastside about 15 years ago, it was full of litter, overgrown with poison ivy, and had a few homeless camps on-site. Now Scherzer's urban farm, Rain Lily, is punctuated with the clucks of chickens and blooms with peach blossoms, olive branches, and plump heirloom tomatoes. Her oasis is also the headquarters of her farm-to-door business, Farmhouse Delivery.

Scherzer's business began as a simple endeavor – farmer to farmers' market – but she soon realized that there was a need for food to be delivered right to her customers' doors. At the root of Farmhouse Delivery is Scherzer's own passion for cooking food and the ingredients involved.

"My business has always been about inspiring people to cook," Scherzer said. "What we realized is that we had to take it further than just a basket of vegetables. So, putting it together with sauces and recipes and stuff was another way to pass this stuff. We're one step from the farmer."

Scherzer's relationship with growing food began shortly after she studied political science and psychology at the University of Mississippi. Instead of jumping into the academic or corporate world, Scherzer started working at the Natural Gardener, where she not only met her wife, but also discovered a deep love for cultivating plants.

"I fell in love with it," Scherzer said. "The accomplishment of growing food and eating it, it just feels so connected and so good."

What began as a small operation on the Eastside has now expanded throughout Central Texas. Scherzer meets with farmers on a seasonal basis to make sure that the food they grow is up to the standards that she has set for Farmhouse Delivery. Longtime customer Theresa Noyes keeps coming back because Farmhouse has changed the way she looks at food.

"Farmhouse has made me a better cook," Noyes said. "Their information teaches you how to maximize each bushel and they support local producers. They are a unique business wanting to see other businesses thrive, and they keep me out of the grocery store during the work week."

In addition to Farmhouse Delivery, Scherzer also tries to use Rain Lily Farm as a way to help connect people to the food that they eat and introduce them to the process of growing it. Rain Lily regularly hosts community events like Shakespeare performances to help get people interested in farming.

"It's a big experiment about [if it is] really possible to grow and eat the food," Scherzer said. "We've just gotten food miles that are just out of control. We've gotten so disconnected. I love having this sacred space in the city. I feel like those are going away and people need places to connect and just be together in nature."

In part of expanding, Farmhouse Delivery recently started working with the Farm Project, founded by Zooey Deschanel and her husband, Jacob Pechenik, on aeroponics. Aeroponics offer a way to grow a large amount of vegetables in a small space needing little else but some fertilizer and water. During SXSW, they held an event at Rain Lily to showcase their aeroponic towers.

"It's one of the environmental ways to grow and you can grow in tight spaces, in vertical spaces," Scherzer said. "It uses barely any water, no soil. The solution to feeding people is going to be multifaceted. I think everyone should participate and grow a little something, and maybe this is a convenient way to access growing foods."

In between managing cultural events at Rain Lily and managing Farmhouse Delivery and Rain Lily Design, Scherzer and Beal both make it a priority to make time for one another. Even though it may get a little hectic running a family and two businesses under the same household, both Scherzer and Beal wouldn't have it any other way.

"I wouldn't trade the closeness that our businesses share for anything," Beal said. "I get more face time with her than most couples, and that allows us to celebrate our passions of food, farming, plants, design, and most importantly entrepreneurship together."

Though both Beal and Scherzer have big plans for the future, at the heart of their operation is a desire to just do a little good in the world.

"I'm always considering the next generations and impact," Scherzer said. "Everything I want to touch, I want to leave it better than I found it."

A version of this article appeared in print on April 20, 2018 with the headline: Farmhouse Delivery Is All Grown Up