It's been a few weeks since my last visit to Colleen's Kitchen and I cannot get that house punch out of my head. With notes of apricot and lemon, it's strong like the trash-can punch of your hazy undergraduate memories, but also tart and elegant and slightly irreverent, just like every beloved Southern auntie under the sun. In many ways, that house punch is indicative of Colleen's Kitchen itself: effervescent and easy to overdo, in all the best ways. 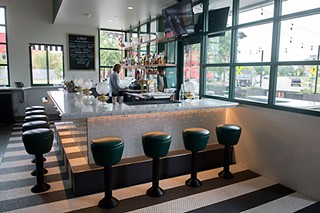 A recent arrival to the burgeoning Mueller dining scene, Colleen's Kitchen is the brainchild of Mueller residents and co-owners of the recently shuttered J. Black's Feel Good Kitchen, Ashley and Sean Fric. The cheery, airy restaurant anchoring the Alamo Drafthouse building is an homage to Ashley's Aunt Colleen, who clearly made quite an impression on her niece – from the quirky chicken-themed wallpaper to the disco ball at the host stand, to the assortment of wedding cake toppers and other tchotchkes on display in the bar area. Colleen was obviously a lively woman with eclectic-yet-classy taste. This sassy Southern ethos is reflected on the menu as well, which speaks both to genteel ladies who lunch and folks who love a spirited dinner at a groaning table laden with modern comfort food.

We dropped into Colleen's for an early dinner on a Saturday night, thinking we'd have smooth sailing ahead of live music plans by dropping in at 5:30. Instead, we had to wait for nearly half an hour for a table. Once we were finally seated, supervised by a gallery of old photographs in eclectic frames, we dove into the menu. Our favorites from the starters were the bacon-wrapped dates, an umami-caramel marriage made in heaven, and the pimento cheese, an elevated version of the spread you remember from church potlucks, with just a kick of cayenne at the end. We also enjoyed the fried chicken and fried green tomato biscuit sliders, the biscuits golden-brown, buttery, and formidably delicious. My daughter, who had a biscuit as her dinner, declared afterward, "I would eat those biscuits any day." High praise from our resident carbohydrate connoisseur, to be sure. We probably should have paced ourselves for the entrées, as the portions were generous and the food (generally) tasty. The shrimp component of my husband's shrimp and grits was delicious, flavorful with blackened spice. The grits, on the other hand, were bland enough for a BRAT diet. Eaten together with the shrimp, the underseasoned grits weren't an issue, but I certainly didn't want more than a bite of them on their own. Similarly, my son's fried chicken plate boasted excellent yardbird, perfectly seasoned and juicy, but the mashed potatoes on the plate were just meh. A side order of mac & cheese evidenced very little cheese or even bechamel, they appeared to be just buttery noodles topped with seasoned bread crumbs.

Despite being quite stuffed indeed, we sampled the mason jar banana pudding, which was light and very similar to Granny's. Our lawyer friend and his wife shared their enormous slice of Key lime pie with me; it was so fluffy and creamy it was practically cheesecake. While I could have bellied up to a carafe of the house punch and been totally content, I also enjoyed the Bless Your Heart cocktail, a delicious Southern spin on a French 75. 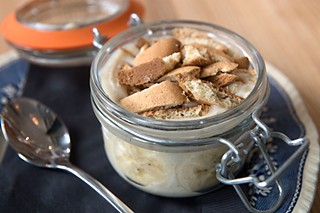 When I returned for lunch with some girlfriends a few days later, the vibe was much more subdued. The weather allowed for a shaded spot on the patio, which was very pleasant (note, though, that my tolerance for dining among dogs and babies is relatively high; this is Mueller on a weekday we're talking about). We started with the catfish bites appetizer and were rewarded with tender chunks of expertly seasoned fish with a side of tartar sauce (I'd love if chef Brian Felicella offered comeback sauce with this dish). Skewing toward the lighter side for our entrées, we opted for avocado shrimp toast, which featured those same delicious blackened shrimp from the dinner entrée, but was very skimpy on the avocado. For $13, I want at least half an avocado to show up on the plate. However, the orange-roasted beet salad with grilled chicken was quite possibly the best salad I've had in Austin; your mileage may vary on this point depending on how you feel about beets, because this salad is about 70% plump, delectable, orange-glazed beets. I would eat that salad any day.

I'd heard rumblings from friends that service at Colleen's was a little uneven, but my experience was really just a study in personality differences. Where our server at dinner was exuberant, charming, and funny, our server at lunchtime was more subdued, a little less interested in interacting with us, and didn't offer dessert before dropping the ticket. Our orders were correct and everyone was polite and efficient.

When we left Colleen's after our Saturday night dinner, my tween son declared his shock that we had been there for two hours. We aren't all lucky enough to have known Aunt Colleen, but we can at least enjoy her spirit at this lovely new restaurant, and we won't even be mad about it when we've stayed longer than we'd planned. That's the mark of true hospitality.