"Authenticity has zero utility in determining whether a restaurant is good," wrote my dear friend and predecessor, Brandon Watson. I wholeheartedly agree, and, quite frankly, wish I could take a page from the Three Billboards playbook and make this a very public PSA. Still, this isn't Ebbing, Mo., and, like Mildred, the word isn't going away anytime soon. Late last year, ManinPasta's owner, Davide Careri, who hails from Sicily, opened a new Italian restaurant on South Lamar down the road from Broken Spoke. The food is clearly legit, but that's not what makes it delicious. It's that each item – even those that need an edit – is crafted with the love and care of a grandmother whose hands have been making pasta, cutting fresh produce, and kneading bread for decades.

On a Thursday evening, my dining companion and I were pleasantly surprised to find free parking in the nearby garage and no wait inside the restaurant. When I asked, the server was quick to note that the space was formerly aRoma Italian Kitchen & Bar, but that now it's – here's that word again – an authentic Italian restaurant, and that he was one of only a few who spoke English. (As an aside, we never heard any other language or accent that night, but on the lunch visit, Italian was the predominant language). The layout is similar to aRoma's, with some added art and adjusted seating, and the bold wood-fired oven, another Italian immigrant, is still visible from much of the dining room. The kitchen window allows a peek inside and dried pasta hangs nearby. We opted to dine al fresco on the patio, where the ambience is scaled down with wrought iron tables and chairs surrounded by clear plastic tenting and a twinkle-light-adorned giant oak. It's comfortably tucked away from the busy street.

The cocktail program is solid, and our Old Fashioned and Sazerac (both $12) were well executed. (It's worth noting that the time frame between items varied widely, and not always sensibly, despite convivial service.) The Dal Mare ($16.50) – sautéed mussels and clams in a cherry tomato broth, served with five small pieces of house-made bread – arrived piping hot. The ocean-scented bivalves were fresh, and my only issue with the luscious broth was too few pieces of warm bread for soaking it up. Typically I opt for more interesting salads, but curiosity won, and I went with the Cesare ($10.50). House-made, the dressing was thick and its sweetness, combined with that of the balsamic drizzle, was a tad overkill, but it was mostly balanced by the plentiful shaved Parmesan and cool crunch of romaine. 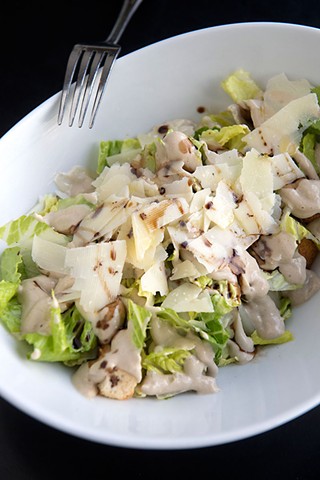 A Roman native, spaghetti carbonara is a staple dish. Here, the house-made noodles were excellent, and the pancetta was so perfect – a crispy, oven-baked exterior that retains its meaty bite – that I found myself distracted from the conversation, focusing instead on forking more pieces. The eggs were certainly fresh, though "free range" is another term so overused that it's lost its effect, and all hail the powerful pecorino. The cheese in this place is on point. My main issue here was the price – $18.50 seemed quite steep, not only for the portion size (I know, Americans have skewed perspectives on this matter), but also because although it was a wonderful dish, I'm not sure that cost will be justified in a town with a growing roster of Italian restaurants, whether or not their authenticity matches ManinPasta's. The majority of executive chef Davide Tonel's menu sings that same lovely, but expensive tune – from a $36 16-oz. T-bone steak special to a porcini mushroom risotto for $22.50. Perhaps more of a bustling dinner destination, what with the prices and hearty portions of comfort food, it's a nice little reprieve no matter the hour.

The pizza is labeled Verace (Verace Pizza Napoletana, VPN for short) throughout their limited online presence, though I couldn't find Manin on the list of certified vendors. That said, who cares? It's delicious. Again: Just because food is official, or verified, or certified, doesn't mean it's good. It's the care for ingredients, the thoughtful execution, and the creativity that matters most. Does Manin's food taste good? Yes, it does, and it just so happens to come from an Italian – mostly Sicilian – team. Sticking to simplicity, the Margherita pizza was tasty, though subdued in flavor. I was hoping for a bolder sauce, and fresh basil was replaced with an olive oil-based basil swirl. The crust, although strangely uniform, married thin outside crunch with chewy interior, and the thickness was nice. It seems pizza chef Flavio Miraglia has become so adept at making these pies that we miss some of the unpredictable, character-defining charred bubbles. The sausage and peppers on the Fuoco dell'Etna spiced things up just right.

On a weekday lunch, we were the only diners, and though there is an extensive, curated wine list, I once again opted for a cocktail. The Sicilian Gin Spritz, featuring house-made Meyer lemon mix, was just boozy enough to warrant the $12, but lively enough for lunch; the Italian Mule, with its sprigs of fresh mint, was balanced and effervescent.

I have a thing for cucumber tomato salads. Accompanied by six pieces of house bread, this one, drizzled with their go-to sweet balsamic, did not disappoint, once I added a touch of salt. My Pollo alla Mediter­ranea ($18.50) featured breaded chicken, Milanese-style, topped with halved red and yellow cherry tomatoes, fat capers, and Kalamatas served with a side of creamed potatoes. Even half of the dish, albeit a bit oily, had me heavy-lidded, content to soak up the unexpected warmth and charm from an eatery topped with several stories of condos.

On both visits I unknowingly Shazamed the same song – "Alta Marea" by Patrizio Buanne – only to finally recognize it as an Italian cover of 1986 Crowded House hit "Don't Dream It's Over." A woman in the kitchen sang her heart out while I sat hoping more people would come in and stay awhile. And I suspect a price point adjustment would usher them right in.