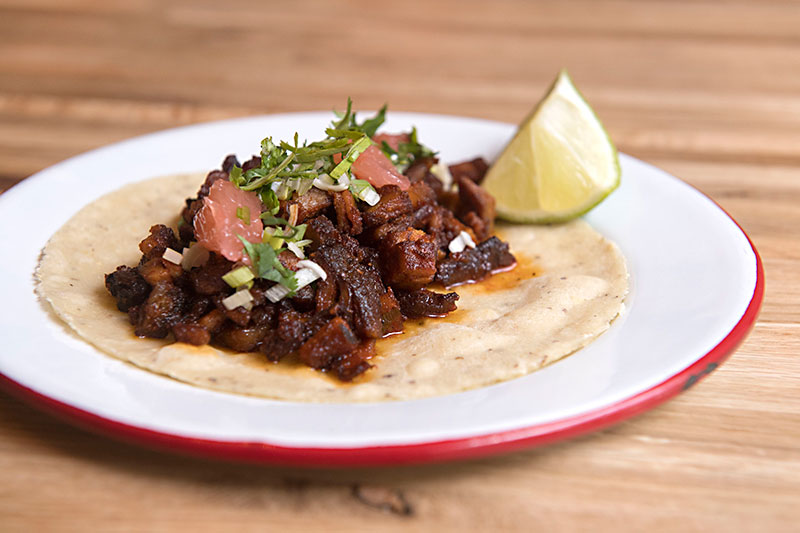 Tacos al pastor are to Mexico's capital city what brisket is to ours: an edible national treasure so important you can't just visit and eat the dish once. You must compare and contrast different versions (and will likely still have a hard time settling on a favorite). And just as slow-smoked brisket hasn't quite taken off in CDMX, legit tacos al pastor are also hard to come by here in Austin – though they're experiencing a reawakening thanks to the chefs behind Dai Due's new taqueria in Fareground, Austin's first food hall.

Characterized by the doner kebab-style meat cone formed around an electric trompo (vertical rotisserie), tacos al pastor are said to have arrived in Mexico with the wave of Lebanese immigrants who started to arrive in the late 19th century. The pork, marinated in an adobo made of chiles and achiote, is shaved from the trompo – by a skilled taquero – much like lamb shawarma, then served in fresh corn tortillas and traditionally topped with fresh pineapple, onions, and cilantro.

Here in Austin, al pastor tacos can be found on a number of menus around town (El Taquito, Mi Tradición, Taco More, and Veracruz All Natural, to name a few) but only a few spots, like Riverside restaurant Rosita's Al Pastor, are making al pastor using an electric trompo. Hyde Park taco truck, Vaquero Taquero, for example, uses a gas trompo with ceramic rocks.*

"Not many places use a trompo because it requires skill and patience in all aspects, from slicing the meat [to] the right thickness and, most importantly, building it so you get the trompo shape," says chef Gabe Erales, who opened Dai Due's taqueria with chef/owner Jesse Griffiths this January. "And there is additional labor in cutting the meat off the trompo. It's an art form."

Before joining the team at Dai Due, Erales cut his teeth working in top-notch kitchens such as Fonda San Miguel, La Condesa, and Odd Duck. After opening Geraldine's in the Hotel Van Zandt, where he was sous chef for two years, Erales left Austin to work in the Noma Mexico test kitchen with globally acclaimed chef René Redzepi. While in Tulum, he and the team ate several times a week at a local spot called El Carboncito, where the pièce de résistance was a charcoal trompo.

"I guess you could say that was a huge influence," says Erales. "I looked at what most taquerias have used traditionally, to understand the basic functionality, but also wanted to impart the flavor of smoke and post-oak charcoal and wood."

Erales, who has both a bachelor's and a master's in mechanical engineering from UT, researched different designs and collaborated with Griffiths and Ramiro Guardiola from Design Hound, the company that built grills for both Dai Due locations, to create a trompo that is both unique and visually appealing. Three ember shelves curve around the vertical spit, surrounding the meat with smoldering lump charcoal made locally in small batches by Jeremy Ynostrosa of Texas Premium Charcoal.

In lieu of domestic pork, Dai Due uses feral hogs, an invasive species numbering around 2 million in Texas, where they are estimated to cause $52 million in damage to our state's agriculture each year. The kitchen brings in three to six whole hogs a week, utilizing the hams, shoulders, loins, then adding in some fatback because feral hogs are leaner. Sous chef Mike Diaz then marinates, spices, and stacks the meat. The resulting cylinder is smaller than traditional trompos built from domestic pork.

"Because al pastor comes from fattier, tougher cuts, the trompo is essentially slow-roasting it to break down the collagen and proteins so that it's tender like when you braise in the oven," explains Erales. "Since the slices of meat are stacked, the fat is essentially self-basting. If you were to disassemble the trompo and throw one of the steaks from it on the grill, it would just be extremely tough and almost inedible."

Any taco connoisseur knows the final product is only as good as the tortilla wrapped around it, and Dai Due takes no shortcuts in that process either. Griffiths and Erales source heirloom corn varieties from different regions of Mexico based on the surplus of small farm shareholder communities. The corn is cooked, ground, and nixtamalized (the process of transforming the corn with an alkaline solution) into masa, then pressed into fresh tortillas daily. Tender slices of meat cut from the trompo are nestled in each one, then topped with onion, cilantro, and juicy Texas grapefruit supremes in place of traditional pineapple.

In short, the wild boar al pastor at Dai Due's new taqueria isn't just unique to Austin: You won't find tacos quite like this anywhere but here.

[*Editor's note: We previously reported that Vaquero Taquero uses an electric trompo. The article has been updated.]

A version of this article appeared in print on March 30, 2018 with the headline: Consider the Trompo