Locals let fungi do the work 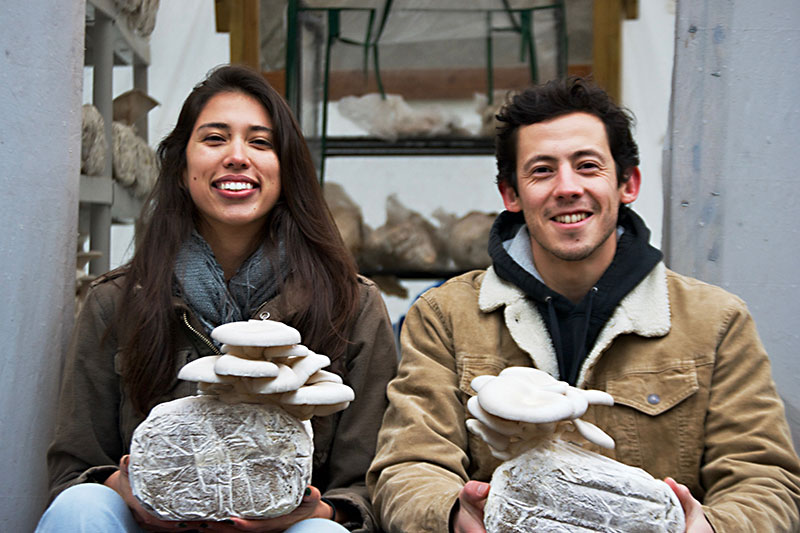 Creative solutions spring from dissatisfaction with the status quo. After spending several years working as a hydrogeologist in the oil and gas industry, Daniel Reyes discovered a deep discontent for the current industry practices. Frustrated and in pursuit of alternative methods for environmental mitigation, he stumbled upon fungi and the study of mycology. Suddenly the former scientist became part farmer, part researcher.

Now Reyes has a research station, a lab, and a presence within the community, but he says that is only very recent. For the last three years, Reyes' research was conducted outside of public view in various coworking spaces around town. "It's been two years of collecting wild mushrooms, putting them into cultures, and only now we're offering them to people," he explains. Although he is now supplying the community with fresh, edible fungi, he has no plans of making horticulture the core of his business. Research into fungi's role in the environment – and its significant ecological benefits – is his most pressing pursuit. "The intention right now is to increase the general understanding of mycology in Central Texas," he stated simply.

“There is an aspect of the gift economy where we do use the mushrooms to connect with the community.” – Daniel Reyes, Myco Alliance

Many people think of fungi as the delectable mushrooms on top of a gourmet pizza, but Reyes explains that mushrooms are actually the fruit of the fungi. "You can think of this as the equivalent of seeing an apple and an apple tree," he explains. The microorganism that is responsible for the decomposition is called mycelium. It's the engine that decomposes natural waste and gives life to an enzyme-producing mushroom.

Reyes seems exasperated by the continued misperceptions and the overall lack of data in the field. "Mycology has been around for a long time, but bringing it out into the mainstream has been quite a struggle," says Reyes. He explains that when he finally ventured outside of lab-based living room research to include the community, public interest exploded. People had simply not been exposed to fungi beyond the button mushrooms at the store. Once they were given a proper introduction, most were interested not just in eating the mushrooms, but also in learning to grow them. At first, Reyes wasn't sure how to incorporate the general public into his research efforts, but soon he realized that if he could teach classes, he could make his research station sustainable and train new, valuable volunteers.

What began as monthly classes in 2016 has evolved into biweekly volunteer sessions where the public can visit the research station and participate in the mushroom growing process and analysis. There are also regular classes, workshops, and private consultations for those interested in the world of primary decomposers – it's an opportunity to make mushroom cultivation as common as practices like homebrew and kombucha-making. "It's been very slow, very steady growth," he says. In the last several months, Reyes has been moving toward offering mushrooms for medicinal use: "Medicinal tinctures and powders is a big part of what we're going to be doing and offering." Currently the tinctures are available as part of any workshop registration.

As someone who regularly consumes mycelium as a preventive measure, Reyes advocates the consumption of ground-up fungi added to teas as an effective form of self-care. However, at most places, investing in Chinese herbs and tinctures can be cost-prohibitive. To help open new communities to the uses of alternative medicine, Reyes will offer his products on a sliding scale. He shrugs and explains, "The idea is to get them to the people."

In conjunction with public classes, Reyes continues to conduct his research on-site at Circle Acres. Located on 10 acres of what appears to be a picture-perfect expanse of wetland, Circle Acres was once a city landfill that eventually devolved into an illegal dump. After years of restoration efforts by the city, the environmental quality of the site improved significantly when Ecology Action took over ownership in 2009. They have been granting Reyes free usage of the space since 2016. Since his installment on the property, this East Austin land has come full circle: Reyes is working with a variety of local enterprises who dump waste on the site which he then repurposes through fungi cultivation. All the waste that Reyes receives is biodegradable. He explains that his preferred waste streams come in the form of landscaping debris, logs, sawdust, cardboard, and coffee grounds. 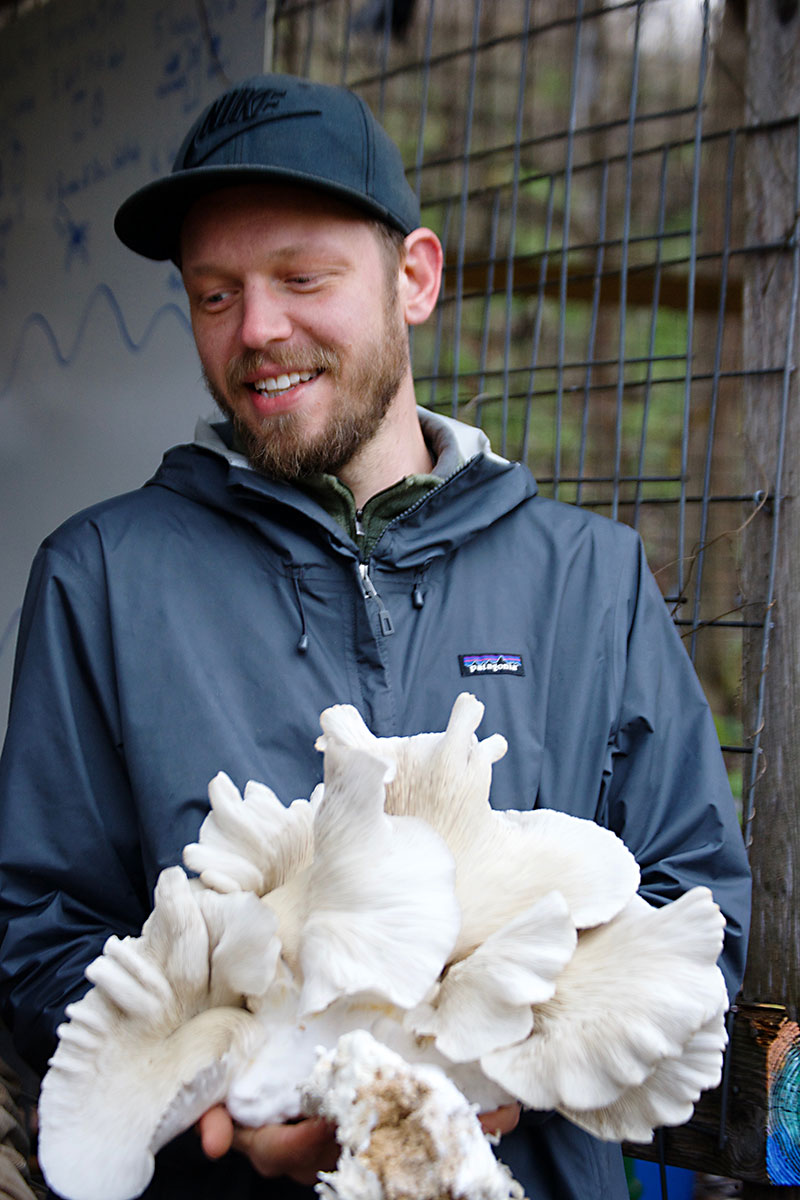 By transforming one man's trash into his treasure, Reyes can both fund his research on a shoestring budget and test fungi decomposition efficacy on various industrial byproducts. "As far as the research here, it's really a lot of experimentation with substrates. We really try to take advantage of all the urban waste streams that the city [naturally] provides," he reiterates. Reyes has partnerships with carpenters, wood chippers, landscapers, and coffeehouses who send their refuse to him to be repurposed rather than disposing of it through city-funded channels.

A brief stroll around the test site reveals garden beds full of wood chips and rags blossoming with turkey tails and oyster mushrooms. Entire logs are being slowly decomposed by mycelium, their deep-brown wood slowly being mottled by white fungi. There is even a greenhouse so that volunteers and researchers can easily identify the success of different substrates in producing fungi. To significantly increase the scale of fungi yields for industrial-level waste mitigation, Reyes will have to establish the most effective way to decrease the amount of energy used in the mushroom cultivation. He will need to determine how to translate fungi growth from blends of their preferred substrates (wood chips) to growth on other materials like oil-soaked rags. The Myco Alliance team is currently experimenting with different toxic industrial refuse – petroleum-soaked wood and rags, for example – to understand the decomposition requirements of different fungi strains.

All this experimentation has produced more mushrooms than Reyes knows what to do with – every day he ends up with 10-15 pounds of excess mushrooms. So, he started providing them to the public. "There is an aspect of the gift economy where we do use the mushrooms to connect with the community," he says. None of the mushrooms are sold; they are used for educational purposes. Volunteers that come out are given 2-5 pounds of mushrooms to take home and enjoy. Dozens of pounds are given to the surrounding community. The rest are offered to local food businesses like Cafe Nenai'i, Curcuma, and Agua Dulce, for recipe testing.

Part research, part community activism, the Myco Alliance is striving to provide Austin with an education on fungi, and it just happens that the public is particularly motivated by tasty, homegrown mushrooms. Reyes adds, "For me, it's a lot more worth it to get these mushrooms into the right hands than trying to put a dollar sign on it."

A version of this article appeared in print on March 23, 2018 with the headline: Let the Fungi Do the Work