Who says you can't have ice cream and french fries for breakfast?

Breakfast might be the most personal of all meals. For a chef, it can be the first casualty of a busy morning, and one of the only meals shared privately with their loved ones. Whether they're flexing culinary skills or simply whipping up scrambled eggs with hot dogs, a lazy morning cooking a hearty meal is a luxury. We visited the homes of several chefs to investigate the morning meals they share with their families, even if that just means splitting a bowl of soft serve.

At their Pflugerville home, the three children (aged 4-10) of Mi Madres' Edgar and Christina Torres – Diego, Andreas, and Rafael – are devouring some huevos con weenies, a simple breakfast dish passed down throughout his family. "My grandma did it, my mother did it, and I'm doing it for my kids now," says Edgar. "I always thought it was a weird thing. I thought it was because we just didn't have any food, we're just mixing hot dogs with eggs." 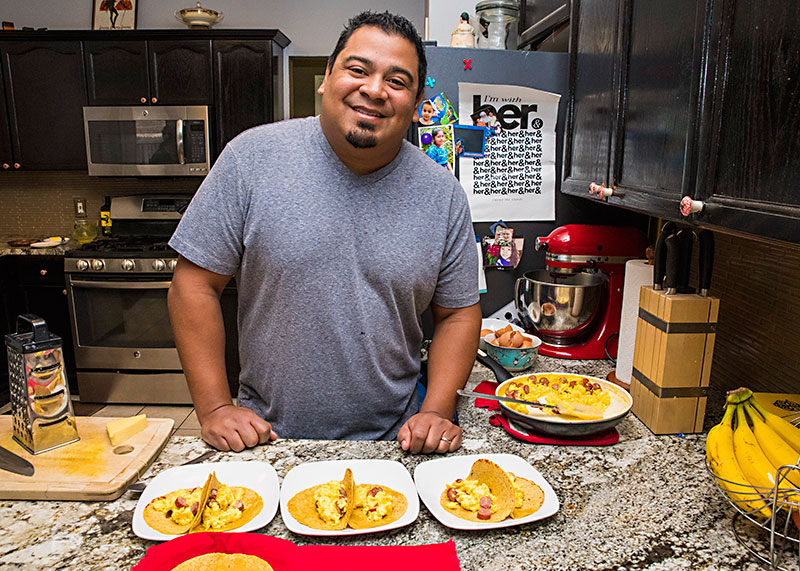 Although the family has foodie blood, huevos con weenies is as simple as it gets. Cook a few hot dogs, scramble eggs, mix with Jack cheese, serve over corn tortillas hot off the comal.

The kids love them, but when asked their favorite food, the overall consensus is steak from Texas Roadhouse. Mi Madre’s is a close second (specifically the queso), but they’re not immune to taco chain influences. Around the breakfast counter, they shout out slogans from Taco Bell commercials. Growing up in a restaurant family, even their jokes are food-related.

“What do you call a cow with no legs?”

Christina, whose family hails from Guatemala, didn't start eating huevos con weenies until she met Edgar. "We grew up eating black beans with crumbled queso, plátanos, and eggs," she says. When he first visited her family, it caught Edgar by surprise. "I was like, 'Do you have refried beans?'"

On healthy days the Torres family eats cereal or yogurt with fruit, but the comfort of a hot breakfast can't be beat. "This is quick. Even before school, you can just chop up the hot dogs, get 'em in. That's why it's so good," Edgar says.

The dish has never been offered at Mi Madre's, and though Edgar and Christina aren't making any promises, it might make an appearance as a secret special. Next time you're there, it couldn't hurt to ask for a "double zero taco."

Cafe Nena'i is open six days a week, so on Mondays, the mother-daughter team behind the South American pastry shop treat themselves. Filet mignon and sliced rings of raw onion sizzle on the stove as Elena Sanguinetti explains her motherly cooking philosophy. 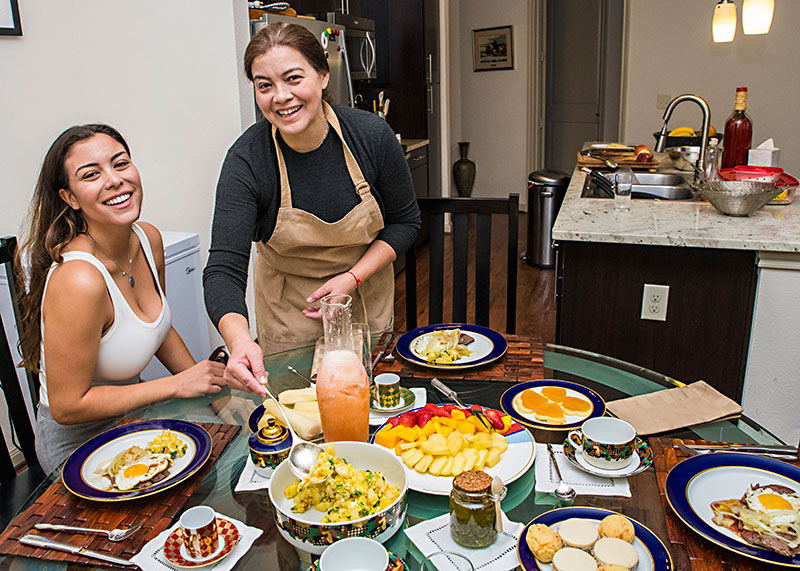 "Gladys asks how many tablespoons. I say just to do like this." Elena pinches her fingers together. Despite culinary training, she isn't the measuring type and doesn't share her Paraguayan family recipes. Her daughter Gladys learns through watching. Since they live together in a lakeside apartment near their Montopolis cafe, she has plenty of opportunities.

Mashed chunks of yucca simmer in another pan. Crack in a few eggs and slices of green onions to create a dish so home-style that it's nearly unGoogleable – mandio chyryry. It's Gladys' favorite since childhood. ("Nena'i" translates to "little girl" in Guarani, the indigenous language of Paraguay.)

"When you have an asado [barbecue], you usually have leftover yucca. So in the morning, you chop it up and make mandio chyryry," says Gladys. "It's kind of basic, but it's really delicious."

Their breakfast table is set with pastries you'll find in the cafe like chipa (a cheesy, crumbly, savory ball) and alfajor (a dulce de leche macaron). Another sweet that might soon appear at the cafe is a thick heart-shaped slab of sweet potato on top of a chunk of Gouda cheese.

After such a big breakfast, Gladys and Elena skip lunch to spend the day outside with their English springer spaniel, Koki, but not before he's also had his breakfast: Elena always saves him the egg whites.

You might expect breakfast sandwiches from the chef of soon-to-open Bird Bird Biscuit, but actually, Brian Batch only eats the restaurant's signature biscuits at night. 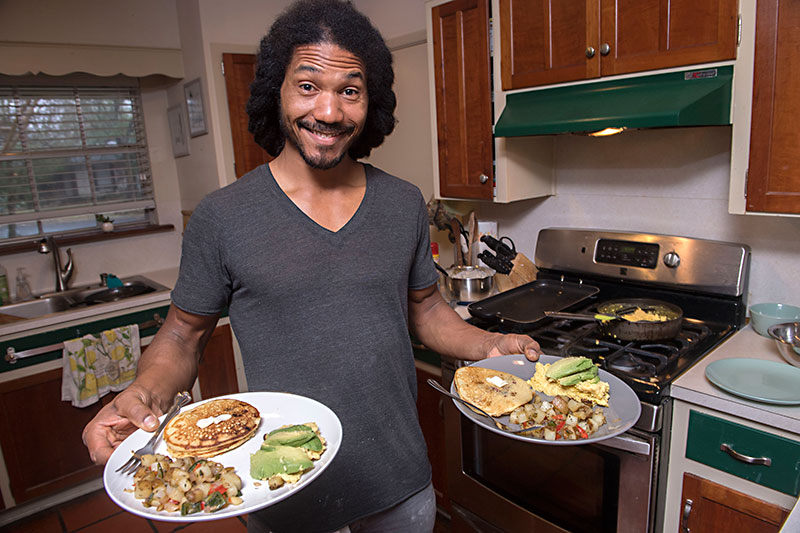 "We usually have biscuits for dessert," says Batch. "I make this clotted cream. You reduce heavy cream down over about 24 hours and put it on a biscuit with some jam. It's incredible."

Coffee drinkers will recognize Batch as the affable barista behind the counter at Thunderbird Coffee, where he's worked for 10 years. Now the GM, he's teamed with owner Ryan McElroy for a new breakfast biscuit concept. They'll keep Tacodeli hours, but still offer a dessert biscuit with banana, peanut butter, honey, and chocolate chip.

"The biscuits are all about texture – you want something kind of crunchy. The chocolate chips go in a little cold. At first you get it before they melt, then it changes while you eat," says Batch.

In his East Manor Road home kitchen, Batch heats olive oil in a pan, and throws in potato, red pepper, poblano, onion, thyme, oregano, and a pinch of fennel. At the last minute he adds lemon juice. The hash is accompanied by scrambled eggs cut with whole milk and Parmesan, plus short stacks of blueberry pancakes, and orange and grapefruit juice from H-E-B. "This juice, this juice don't play, man, it's really good. This is fresh-squeezed," says Batch.

Batch’s children are at daycare, but their presence is still felt. His wife Kate joins for breakfast, sitting in a booster seat (which is more comfortable than it sounds). Baby pictures line the walls and safety covers keep the stove dials out of reach.

“Kids turn the stove on, you come home and your house is gone,” says Batch. “Well, your two year old and ten month old shouldn’t really be here without you, but, they’ll still jack with it,” says Brian.

Fish for breakfast might seem unusual, but James Dumapit and Amanda Turner have spent enough time around raw salmon that it tastes good any time of day. After culinary school, they came up through the Uchi group (Hai Hospitality). Turner is now the chef de cuisine at Juniper, Dumapit the chef de cuisine at soon-to-open Loro, the Asian smokehouse collab between Tyson Cole and Aaron Franklin. Despite the sushi pedigree, the fish isn't fresh from Japan. 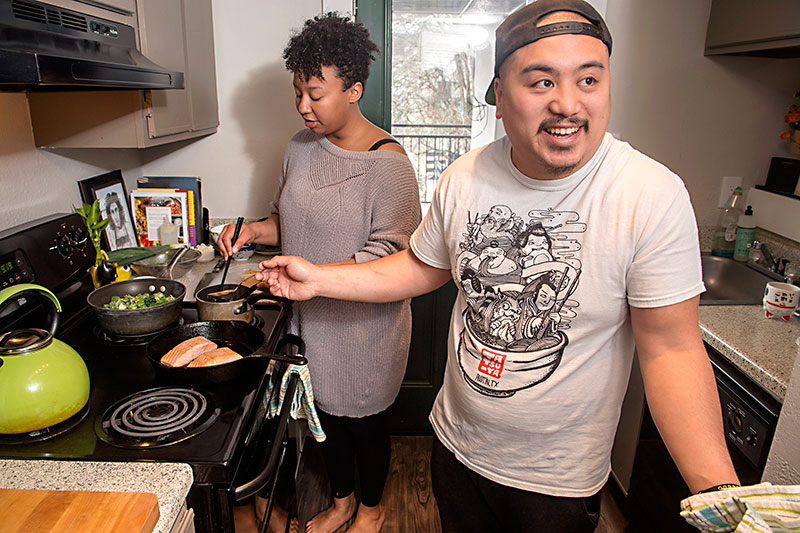 "Frozen salmon from Whole Foods is actually really good," says Turner. "It's individually portioned. You just put it in your fridge overnight and the next day it's thawed. It's super easy."

In a bit of culinary flair for the camera, Dumapit picks some sorrel leaves from a planter on their balcony to garnish salmon filets. "We do keep fresh herbs, but we're not always plating, usually it's in the pan," says Dumapit.

Twice a week they cook breakfast, often Japanese-style. The kitchen of their South Lamar apartment isn't big, more like a cramped diner line, and the stove is flanked by a pencil drawing of British chef Marco Pierre White and a plaque with the Japanese symbol for harmony. This morning three burners are firing: salmon searing on medium-high, a pot of miso soup from powdered dashi, and a pan of Boggy Creek kale, broccolini, leeks, and chard.

"We don't have time to go grocery shopping, so it's cool to pick up vegetables from the farmers' market, because we're there for work. Then having staples that are pickled and fermented is important," says Dumapit. Today that includes umeboshi plums Turner canned while at Odd Duck, jalapeños from Casper Fermentables, and daikon kimchi. White rice topped with furikake seasoning (a mix of nori and sesame) completes the meal.

Seemingly elaborate, it all comes together in under 15 minutes. Still, sometimes sparing even a few minutes is a luxury. "If it's not this, it's a banana that stays in your backpack until noon," says Dumapit. 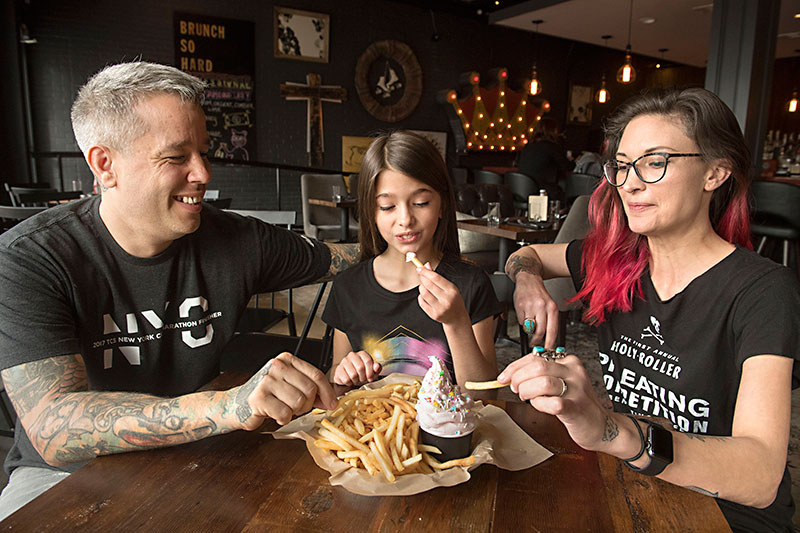 Like many chefs' children, she's raised in their restaurants. The preconception is that chefs feed their kids gourmet feasts, but that isn't real life. "I honest to God can't remember the last time we ate a meal at home," says Callie. "We joke that of the two parents, I'm the garbage unit that eats cookies for breakfast, while Philip is more careful. I literally eat like a small child. I love Gushers, circus animal cookies, and Fruity Pebbles."

"I also am sort of in the mindset these days of not taking things too seriously. We're not curing cancer here, we're eating queso," says Callie. Still, a few healthy choices balance out the ice cream. Callie stops by JuiceLand for a smoothie on the way to work, and when Lucy gets to Philip's restaurant, Bonhomie, her snacking diet changes substantially.

"The very first thing she asks for when she gets to Bonhomie is a banana," says Callie. She's a true chef in the making.

A version of this article appeared in print on March 9, 2018 with the headline: The Breakfast Club