Ask Hana World Market or Asahi Imports for their thoughts on Austin's first H Mart and 99 Ranch Market and you'll hear a story far from the online hype surrounding the big-box stores' recent arrival. "My ultimate goal is if I can survive six months, I think I'll be golden," says Yunhui Lee, who owns Hana World, the Asian supermarket on Parmer Lane. Sally Matsumae of Asahi, the Japanese speciality market, feels the pressure of the chain stores as well. She admits, "To be honest, I'm pretty anxious about it."

Likened by some to Walmart, H Mart and 99 Ranch are two of the largest Asian supermarket chains in America. (H Mart claims to be the biggest, with over 60 stores, and both began as small grocery stores in the early Eighties.) Though their arrival brings more diversity to Austin's grocery store scene, the megastores pose a threat to locally owned, independent Asian supermarkets, several of which have been around since the Eighties or earlier. The disappearance of such businesses risks not only the loss of livelihood, but the loss of family legacy and community history as well.

Matsumae says Austin got its first ethnic grocery store when her grandmother, Shigeko Burnie, founded Asahi Imports in 1967. Upon moving here from Okinawa, Burnie grew increasingly frustrated and homesick with the lack of Japanese ingredients and food in grocery stores and restaurants. "Where was she going to get her short grain rice? Where was she going to buy soba and udon noodles? Uncle Ben's rice and supermarket spaghetti just wasn't going to cut it."

In the early Eighties, Matsumae's father moved his family from Tokyo to Austin and took over the family business (then called Shigeko's Imports). Ushering in a name change, the new ownership also marked a shift from an international import store to Austin's only exclusively Japanese market, which Sally Matsumae has carried on. Today's Asahi still considers itself a grocery store first, but the newer addition of their deli section, called the Onigiri Corner – offering a variety of handmade rice balls – speaks to Matsumae's vision of the store as a konbini, or Japanese convenience store.

Emigrating from South Korea in 1976, Lee and her family are also longtime Austinites. Back then, she remembers the Korean community being almost nonexistent. "We were, like, the second or third Korean family here in Austin." In the late Eighties, her parents opened a Korean-centric supermarket called New Oriental Market, located in the same shopping center as the new 99 Ranch.

After her parents' business closed, Lee saw the opportunity to open up her own supermarket with Hana World in 2012. Though pan-Asian, Lee's store mainly sells Chinese and Vietnamese products in order to keep up with the surrounding demographics. In addition to groceries, Hana World features a food court with a Japanese restaurant and Korean restaurant. In the past, Lee says the food court has typically been home to more tenants. Right now, however, the advent of H Mart and 99 Ranch has driven two tenants away. She explains, "They didn't want to renew their lease 'cause they know that it might be difficult for me to stay."

Lee has been preparing for H Mart's and 99 Ranch's arrival for quite some time. She says both stores have approached her in the past to see if she was interested in selling Hana World, but no agreements were ever reached. Lately, however, Lee claims H Mart has been actively encroaching on her business. In early January, Lee alleges a man associated with H Mart came into her store and handed out job fliers to employees in addition to posting on the store bulletin board. Printed in Spanish, Korean, and English, the fliers – originals of which Lee shared with the Chronicle – advertise employment opportunities at H Mart Austin. Within the Asian grocery business, Lee says H Mart harbors a notorious reputation for raiding employees from local competitors. 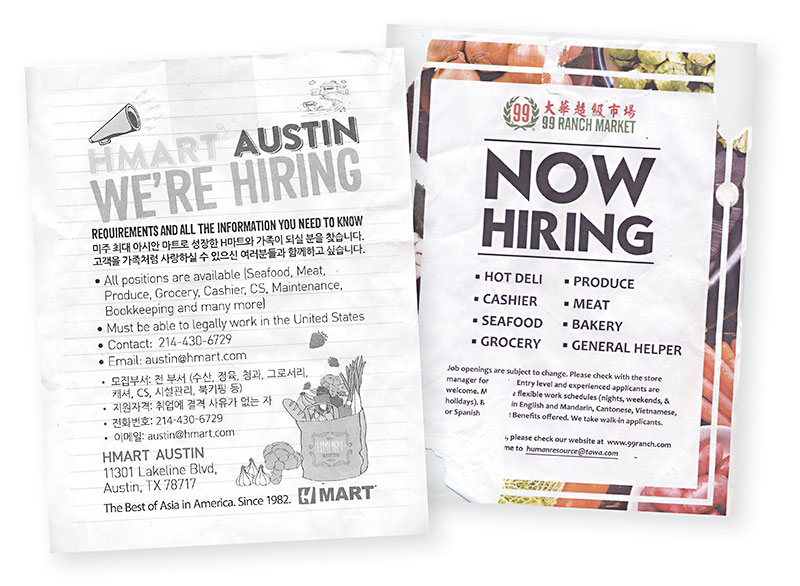 Fliers posted on the bulletin board at Hana World Market

"I knew H Mart would do it, because the vendors that I've been with a long time, they've warned me," says Lee. "They're like, 'When they come to open, just be wary because they are known to poach employees from existing stores.' But I didn't know they were this blatant about it."

Moreover, Lee says a job flier for 99 Ranch was recently found on the store bulletin board, brought to her attention by a concerned customer. When asked if 99 Ranch actively recruits employees from local Asian grocers, Juliet Chen, marketing manager at 99 Ranch, told the Chronicle she was unable to speak on behalf of their HR department. Neither confirming nor denying 99 Ranch posting job fliers in Hana World, Chen went on to say, "We wouldn't just go inside of a supermarket and say, 'Hey, come work for us.' But, obviously, you know, our hiring posts, our hiring fliers, are everywhere. And if a person sees a hiring post and is interested then we would love to give them the opportunity."

The Chronicle reached out to Stacey Kwon, the president of H Mart and all Market Eatery concepts, for comment on the allegations surrounding the fliers. Initially, Kwon said she had no knowledge of this activity. She then reached back out to say she had asked the departments involved with the Austin store opening about the alleged fliers. To that end, she says, "Nobody knows what I was talking about, which I'm very happy about because that means they're not doing it. But it's absolutely against company policy. You know, we believe in fair competition, like friendly competition, but absolutely no dirt. We don't play that way." Kwon repeats, "I literally talked to everyone and nobody knows anything about that." Adding, "I wouldn't want anyone to do that to us. I mean, it's so beyond the rule. Like, absolutely not allowed. That's private property. Absolutely not."

When the Chronicle called the number listed on the flier, a man, identifying himself as Federico, confirmed he worked for the HR department for H Mart corporate and H Mart Austin, although he denied H Mart posting job fliers in Hana World.

Still, Lee says H Mart's arrival brings other possible dangers to Hana World's survival, especially when it comes to their vendor relationships. She claims H Mart approaches vendors and tries to force them to either be the local stores' supplier, or theirs, but never both. "It's like David versus Goliath," says Lee. "Goliath is telling [the vendors], 'Look, if you supply to [local stores], I have 30 stores in the nation. You supply to them, I'm gonna cut you off.'

"If [the vendors] have to make a decision, you know what decision they're going to make," continues Lee. "Because it's supplying one store – because I'm just a small, Austin local business – versus a national chain. They're going to choose the national chain." Lee fears a scenario like this could prevent her from keeping products on her shelves.

Another longtime local favorite, MT Supermarket, also depends on vendor relationships and wholesale partnerships with retailers across the city. Located in Chinatown Center near Kramer and North Lamar, the store has been family owned and operated since 1984, and as the largest international grocery store in Central Texas, they offer a huge selection of staple items and rare finds from Vietnam, China, Thailand, Indonesia, India, and more. This suggests they will be in direct competition with H Mart and 99 Ranch. MT Supermarket declined requests for an interview.

Matsumae says neither H Mart nor 99 Ranch have contacted Asahi. Nevertheless, she's worried the stores could impact her business. As large corporations, H Mart and 99 Ranch have access to resources that a small business doesn't, such as more employees or marketing means. "Asahi is a small production," stresses Matsumae. "We run on bare bones and a highly, highly dedicated staff." 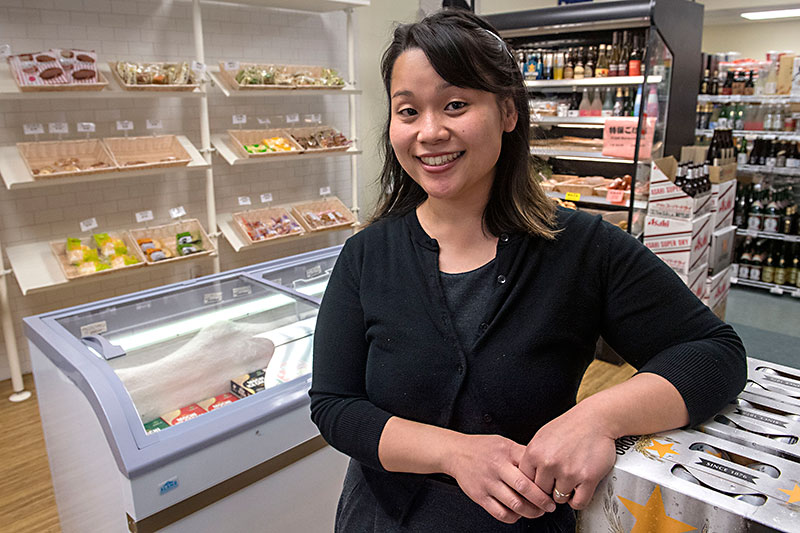 Even so, Matsumae asserts that locally owned, independent businesses will always offer the unique charm that chain stores lack. "From the products we carry to the in-store signs to the store layout to the paint on the walls, all of that is decided by us here, not by some corporate office in California," she says. Not to mention, Matsumae believes Asahi's smaller size allows for greater interaction with customers, creating a personalized shopping experience she imagines would be hard to find at a megastore. "Someone can just come to the counter and [say], 'I'm looking for this ingredient. Help.' And we can go hold their hand and walk through the store and help them grab everything," explains Matsumae. "We can afford to spend the time with customers like that."

For Matsumae and Lee, local Asian markets are more than just a place to buy groceries: They're cultural landmarks that serve an educational purpose as well. Matsumae says she thinks of Asahi as "being a cultural ambassador from Japan" and views informing customers on Japanese goods as a way to empower those new to ethnic supermarkets. For Asian and non-Asian customers alike, Lee hopes her pan-Asian offerings and international food court provide the experience and taste of Asia. "Coming to the market would be like you experiencing a street market in Asia," explains Lee, about the vision of Hana World she hopes to keep building.

With H Mart officially opening on Feb. 15, and, according to Chen, 99 Ranch most likely opening toward the end of the month or first week of March, the owners of Asahi and Hana World look toward their futures with grit. "I'm up for the challenge," asserts Matsumae. She adds, "I think it's just part of doing business. I'm hoping that we have a loyal enough customer base that will stick with us, and I hope to not disappoint those customers." Lee, a believer in the city's locavore ethos, is counting on residents to say no to big corporations. "Austinites are really good about keeping things unique. They don't like the cookie-cutter stuff," she says. "I'm hoping that [attitude] will prevail and that will allow me to stay in business."

*This story has been updated since publication to include Executive Director of H Mart Companies Inc. Sam Q. Kim’s denial that H Mart forces vendors to work exclusively with them. Kim also reiterates that it is not H Mart policy to poach employees from competitors. 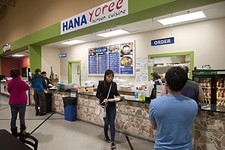