Where to Get East Coast-Style Bagels in Austin 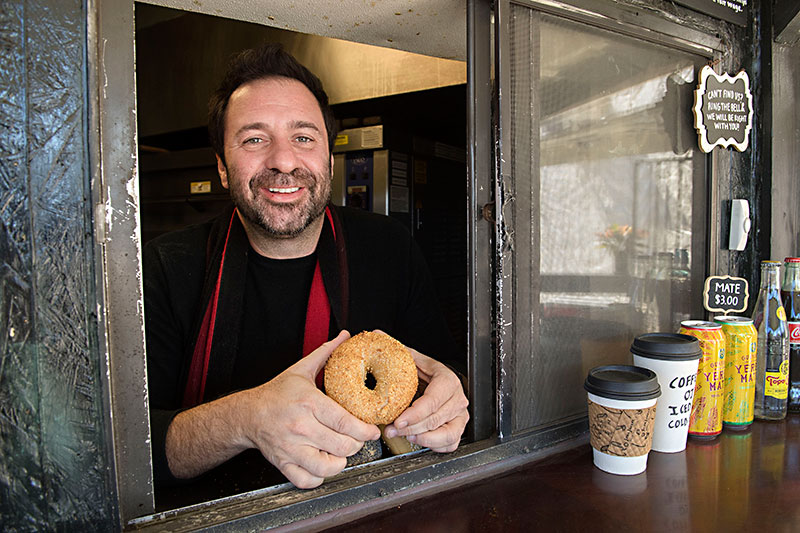 When I moved to Austin from New York 13 years ago, I went to great lengths to bring certain foods back to Texas after visits home. I've smuggled fresh farmers' market corn and tomatoes on board from Jersey; I carried a box of Doughnut Plant goodies like a lap child. Once I even brought double-stacked 18-inch pizzas in one box as my onboard personal item. But returning with at least one bulging Ziploc bag full of bagels was always my main priority.

Rich and Nicole Spiegel, who had been lamenting the city's lack of bagels since they moved here from Jersey, heard about the opening and began to peer in on its progress near-daily. "I would say Nicole has a rightful claim to be the first customer here," says Rich. The couple became loyal Wholy Bagel regulars, befriending owner Scott Campanozzi. And when he decided to sell the business nearly six years later, they offered to buy it, closing on the deal in the last few days of 2015. While they've made tweaks to some recipes and procedures over the past two years, the Spiegels have kept the concept nearly identical to the original.

Though Wholy Bagels and Rockstar both aim to craft New York-style bagels, the difference between the two is palpable. The former is much bigger and puffier, with a crispier exterior, while the latter is smaller in size, with a more condensed crumb.

"My focus is on constantly reworking our product to make it better all the time. My employees want to kill me because I keep changing the recipe and the technique," says Humel, who opened a walk-up window at his production facility three years ago. "There are so many variables that affect your consistency – it's a constant game of catch-up. I have studied the science behind it all for nearly nine years. I use labs in Cali­fornia for water analysis, a very unique and special flour just for bagels, and a key ingredient I have to have shipped from Michigan."

Humel ferments his dough for 24-48 hours before boiling and baking the hand-rolled bagels. And while he finds no problem using Austin tap water, he says he does need to alter the mineral count of the water when they go to the Houston Wine & Food Festival each year. "Houston tap water doesn't cut it," he says.

Spiegel cold proofs his dough overnight before boiling and baking his bagels. He agrees that Austin's drastic weather changes make dough consistency a challenge, and he is also always tweaking his recipe depending on the time of year and the relative humidity. However, he writes off other bagel theories as conspiratorial. "It's not the water; it's not the flour," he says. "It's not something you can only get in New York or New Jersey. It's all about knowledge and the ability to execute."

When Wholy Bagel hires a new baker, they must train for a minimum of 10 weeks before working independently. The current head baker, Hector Lopez, came from New York's acclaimed Black Seed Bagels. "We're just trying to be the best operators we can be," says Spiegel, who calculates they've grown 20% since taking over the business. "Customer service is a priority and so is consistency and speed. That's what's really helped us keep the growth up."

While the bagels are undoubtedly the star of the show, anyone who's spent any time on the East Coast will notice all the other mandatory elements at Wholy Bagel. Bas­kets of fresh bagels hang behind the counter, and a deli case displays a rainbow of hand-folded cream cheeses, Boar's Head deli meats, and Acme Smoked Fish lox. The refrigerator boasts Yoo-hoo and Dr. Brown's sodas, while black-and-white cookies and crumb cake squares – baked by Sweet Sam's in the Bronx – fill a basket near the register. "People are really passionate about some of the things we have here," says Spiegel. "I had a guy ask if he could give me a hug because we had Taylor ham! We do as much as we can to tie in the New York/New Jersey vibe. And the more transplants we get from the Northeast, the more these types of businesses are going to pop up."

Lately, Spiegel's theory has proven correct. For the past year and a half, Alex Manley has been hosting successful bagel pop-ups across town under the moniker Manley Bagels, beginning at pizza mecca Bufalina, where she helped establish the baking program. Hers are a hybrid between a New York- and a Montreal-style bagel, fermented overnight and baked in a wood-fired oven. Since accepting the position of director of baking and pastry for McGuire Moorman Hos­pitality this summer, she hosted some bagel brunches at Jeffrey's. With three restaurant openings on the horizon for the restaurant group this year, the bagel pop-ups are on pause, though Manley did allude to a possible future bagel-related project with MMH. 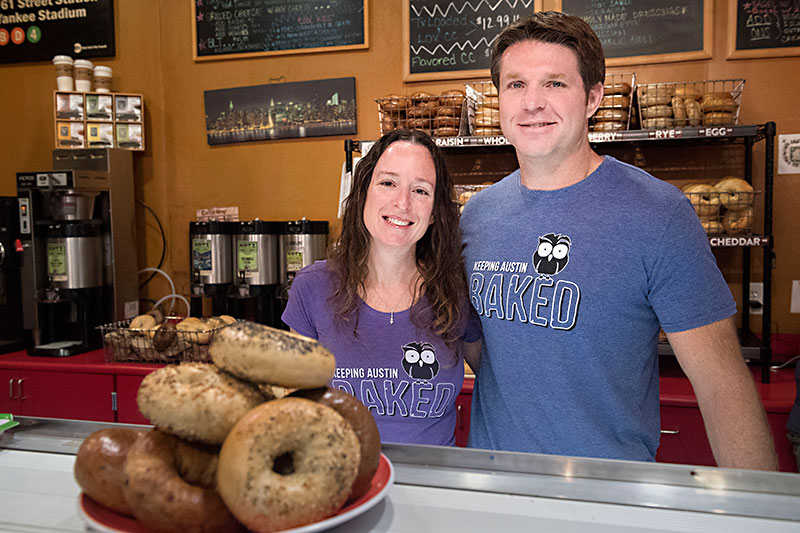 Last January, Zach Biderman, a born-and-raised Austinite and founding owner of Seventh Flag Coffee, opened Biderman's Deli on Far West Boulevard, around the corner from the Jewish Community Center of Austin. In addition to bagels and house-made cream cheese (in flavors like dill pickle), the Jewish deli serves homestyle favorites like matzo ball soup, cinnamon raisin kugel, and Reubens on house-made rye. They currently bake 200-300 bagels daily, selling out by around 11am, and they plan on expanding production this year. "Making bagels is a combination of science and art – and, of course, love," says Bider­man. "It does take skill and multiple iterations to figure out the ideal recipe." While Biderman, like Humel, keeps his trade secrets on lockdown, the steps he takes prior to using the New York boil-and-bake method result in a nice chew and crust, and an egg wash leaves a glossy shine on both the plain and egg bagels.

This past spring, Eastside newcomer Pitchfork Pretty debuted a limited breakfast menu featuring house-made everything bagels and cream cheese made from scratch. Executive chef Max Snyder says both are top-secret family recipes adapted for a commercial kitchen environment, and only a limited number of bagels are made daily – and served hot – to ensure freshness.

Tom Rosen debuted his Rosen's Bagel Co. bagels at a WeWork party during South by Southwest last year. The Kansas native grew up in a Jewish household where the only bagel options came from Panera. "I kind of grew up on the Domino's of the bagel scene," he says. Fortuitously, college friends from New York introduced him to the real thing. "It was a transcendent moment. These bagels were an experience I'd never had before and I was confused as to why, in my life, I'd never had bagels like that. I had three and a half in that sitting!"

After leaving Arizona Culinary Institute to enter a sociology Ph.D. program at UT, Rosen decided academia wasn't for him. Austin, however, was – except for one flaw: He couldn't find a bagel he was happy with. He spent the next two years tinkering with recipes and staging at a variety of bagel shops in New York, like Black Seed Bagels, Ess-a-Bagel, and Absolute Bagels.

“Bagels are a very democratic food,” says Tom Rosen. “They speak to many different people and they’re at a price point a lot of people can afford, so I think there’s something to that.”

"I believe that the water matters," he says. "Changing the water to make it more alkalized is common in pretzel making and other German baking, and I just couldn't replicate the crust and chew that I really wanted. Water in the Northeast is already a little more basic, and ours from Austin is not, so we had to alter our water." Rosen's process is over 48 hours from start to bake. Yeast, flour, and water come together to create a sponge, giving the bagels their slightly sour tang. That sponge is added to more flour, water, and yeast, plus malt and salt. The bagels are rolled out and fermented for 16-24 hours, boiled for one minute, and finished in the oven.

"Bagels are a very democratic food," says Rosen. "They speak to many different people and they're at a price point a lot of people can afford, so I think there's something to that. There's a national current of people respecting and wanting more traditional foods that are done locally – not just having the national brands that push them out. That appreciation for local shops leads to more niche items coming in."

Rosen's crispy and chewy bagels were an immediate hit when he took them to market, arranging spring and summer pop-ups, and selling out of 250-300 in just around an hour each time. In August, he solidified a residency at Wright Bros. Brew & Brew, where a selection of customizable bagels (and bagel sandwiches) are available. While that will continue indefinitely (with more limited options available at Sa-Tén, Forth­right, and Alta's Cafe), Rosen is hoping to open a brick-and-mortar by the end of this year or beginning of next. He's currently seeking a space somewhere near Burnet Road and Anderson Lane, and has been fundraising via Kickstarter for supplies to develop a smoked fish program and more elaborate sandwich offerings. He'd also like to incorporate a wood-burning oven as a nod to both Texas barbecue and Montreal bagel cultures.

Despite the sudden increase in bagel availability across town, there seems to be plenty of fresh-baked love to go around, thanks to the contrasting varieties in different neighborhoods. Rockstar Bagels will be initiating their first expansion in the next few months by opening a food trailer in the Leander/Cedar Park area, with more mobile units to come.

"The more people looking for bagels, the better it is for everyone making bagels," says Spiegel, who is also considering expanding production by opening a second Wholy Bagel location after the shop celebrates eight years this April.

"All of the – air quote – competitors I have been introduced to have been more than gracious with their time," says Rosen. "It's been really cool to see everyone ascribing to abundance theory and also rising tides. I think that's what will make bagels rival the breakfast taco in Austin – more options."

As for this New York-born, Jersey-bred bagel snob? Let's just say, now I have carry-on space for Mallomars on my next visit home.

A version of this article appeared in print on January 12, 2018 with the headline: Coming Full Circle