This local library’s diner serves up cheese, grease, and nostalgia 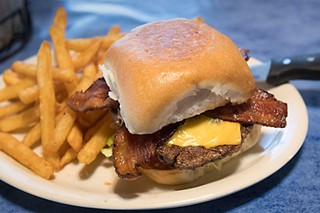 Tucked into an always packed parking lot on the side of Highway 71 East is a small white building with a slanted roof. It looks like a farmhouse, maybe a church, until you get close enough to read the writing on the front identifying it as the Library of Garfield, Texas. Then you look up and see the second sign – narrow, blue, high enough up the pole it's perched on that it might take you a minute to notice it: "Hit the Spot Cafe." 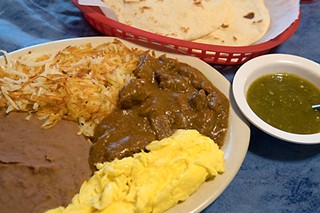 Inside the library is, well, a library. There are shelves of books, a bank of old computers, and stacks of self-published Christian romance novels. On one side is a wall covered with portraits of every U.S. president. If there's a wait – and there will be a wait – you can read for a while, or take your cup of coffee out to the porch. It's classic diner coffee: thin and brown and so hot you can feel it through the thick walls of your mug – not great coffee, but great coffee feels somehow beside the point here. Refills are free, of course. You can even get it in a to-go cup and walk down to explore the tiny ancient graveyard tucked a few feet up the road if the wait is extra long and you're feeling adventurous. 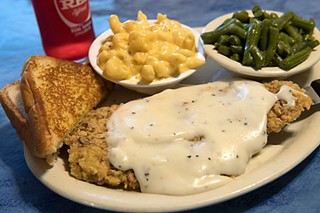 The restaurant space itself is old-fashioned and cozy, with a low, corrugated tin ceiling and old maps decorating the walls. A cardboard cutout of John Wayne leans by the cash register. It feels like a restaurant your grandmother might operate, totally immune to trends. 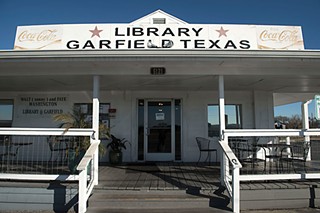 Chicken-fried steak is the thing to get here, either at breakfast with eggs, hash browns, and toast, or for lunch, with a choice of two sides. The waitress recommended the mac & cheese and mashed potatoes, but the idea of consuming such a large pile of similarly colored carb mush made my citified heart shake in its boots, so I replaced the potatoes with cabbage (the only non-fried vegetable option on the menu). The steak is pounded thin and slapped with a layer of chewy thin breading, super crispy and lace-ragged at the edges, like the best fast-food chicken you ever had. It's napped in a buttery blanket of gravy, unctuous and thick, a rich slice of pure comfort brightened up with a faint note of pepper, perfect when sopped up with the spongy wedges of Texas toast served on the side. The mac & cheese is pure Velveeta, strangely reassuring in its blandness, the faint vegetal note of the cabbage, served in a small soup bowl full of melted butter, bringing everything back down to Earth.

My companion ordered the carne guisada, a slow-cooked pork stew with hash browns and fried eggs, over easy (naturally) with the creamy yolk melting thick into the savory sauce of the stew. It tastes like something your mom would make if your mom was really into Tex-Mex – no muss, no fuss, no vegetables. The potatoes are soft and a little crispy at the edges, the beans redolent of pork, with more pig than legume. Around us, the tables were crowded with families enjoying gigantic post-church breakfasts, groups of toddlers ranging through the restaurant like pack animals, moving in clambering groups that scooted by just below eye level, their pancake-sticky fingers grasping at the edges of the vinyl tablecloths and, once, briefly, the back of my chair.

It's a slightly different scene during weekdays at lunchtime. The toddler packs are nowhere to be seen. Instead, there are tables full of men in cowboy hats and baseball caps, groups of old women drinking iced tea, and people taking a break from work or just breaking up their days. It's a bit quieter, so the waitresses have time to scoot around chatting with their customers, all of whom they seem to know well. "When did I become Tim Allen around here?" shouted a waitress covered in lushly old-fashioned tattoos. A table full of bearded men eating hamburgers laugh. This is a joke they've heard before. Following their cue, I order the bacon cheeseburger with a side of onion rings. Go big or go home, I figured. Normally I like my meat rare, but when I try to order it that way the waitress shakes her head at me. "We have medium," she says, "and medium well. And that's it."

My burger comes to the table barely five minutes later. It's a behemoth of a thing that dwarfs the raggedy little pile of (disappointingly bland, as it turns out) onion rings, with a steak knife sticking optimistically from the top. It's the kind of excessively greasy size-of-your-head red-meat extravaganza that our country is internationally famous for. It's perfect when you're hung over, slightly horrifying at any other time. Grease is the prevailing emotion: melted cheese grease, slightly-pink-in-the-middle meat grease, super-crispy-bacon grease, plus a healthy smear of mayonnaise melting in the heat. The chopped onion and iceberg lettuce provide a much needed textural contrast.

Since they serve breakfast all day (of course they do), my lunch date ordered the migas which, though they needed a little pepping up with hot sauce, had a really nice, chewy texture. The accompanying fluffy fried flour tortillas groaned under the massive pile of eggs and cheese. It's such a cheese-intensive experience, it's almost like an amped-up version of the nachos you can get in movie theatres. The beans on the side were less porky than the beans that came with the carne guisada, although whether this was just the variation of another batch, or a different recipe entirely, was unclear.

I took two different friends with me on my visits to Hit the Spot, and both said the same thing almost as soon as we sat down: It reminded them of diners they used to go to with their families when they were little. Hit the Spot Cafe is like that, a diner with sticky menus, chatty waitresses, and tables full of families and seniors gossiping and drinking coffee. It's the perfect place – the best in town, I think – for a paralyzingly potent hit of nostalgia that'll knock you out all afternoon. Of course, that could also be all the lard. But out here, no one's counting. 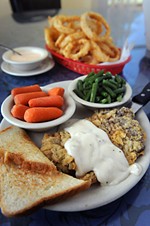 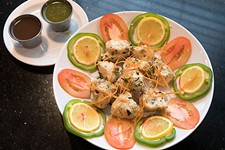