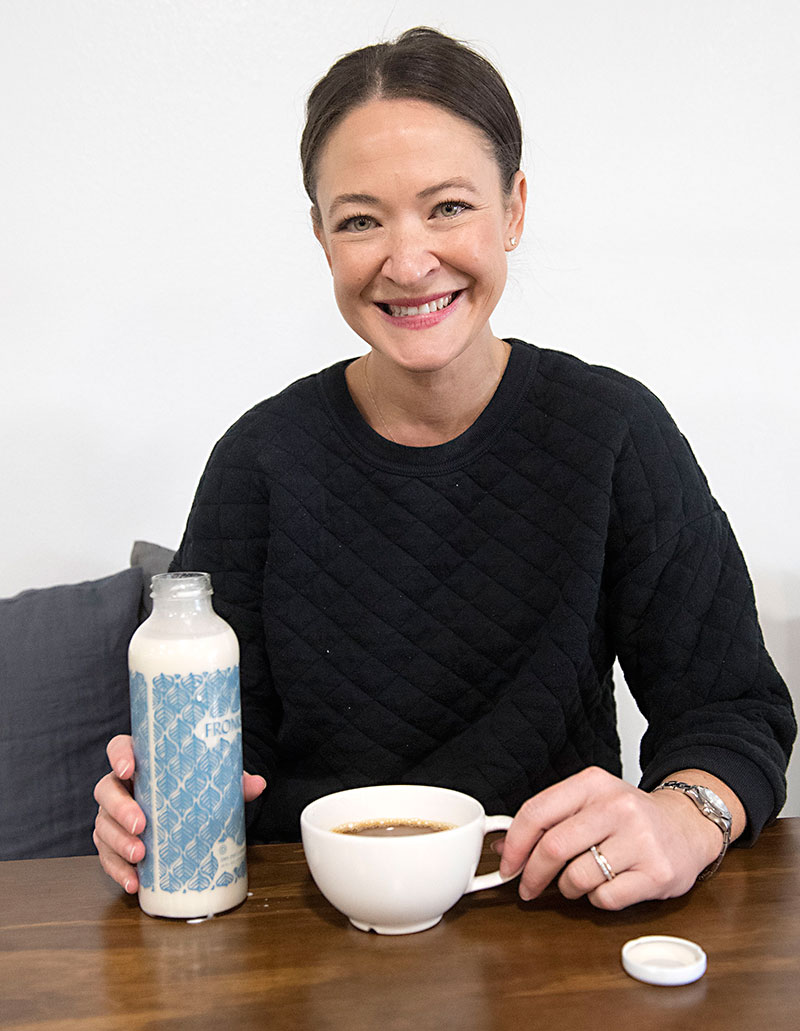 Once a home recipe is mastered, and it's way better than what's sold in stores, it's hard to go back. That's what Jordan Fronk discovered when she started making an organic almond-cashew blend from scratch for her kids and husband. While the process is time consuming, Fronk finds it therapeutic. "We soak and sprout all of the nuts for 24 to 48 hours," she explains, "which basically unlocks the nutrients and allows your body to absorb them." From there, the softened kernels are blended with water and a few simple ingredients, then strained by hand. "Friends and family were begging me to make it for them," she laughs, "then I realized that I had accidentally started a business."

The local dairy alternative comes in three varieties: Original, Simple, and Cocoa. The original is made with almonds, cashews, dates, sea salt, and cinnamon – Fronk admits that this past spring she drank nothing but this blend mixed equal parts with Chameleon Cold-Brew. The cashews, she explains, give an extra creaminess that's not found in store-bought almond milk, and using dates as a sweetener means no additional sugar is needed. "Simple" omits the cinnamon and uses half the amount of dates, so it's slightly less sweet. And "Cocoa" has the addition of hazelnuts for extra flavor. "Kids love it," says Fronk of the chocolatey drink. "I've made mochas with it, and it's delicious."

To figuratively sweeten the pot, Fronks makes home deliveries (at no additional cost if customers sign up for weekly or biweekly service), and subscribers of Farmhouse Delivery (serving Austin, Dallas, San Antonio, and Houston) can add Fronks to their shopping cart online. Fronks is stocked in the refrigerated case at Mañana (South Congress Hotel's cafe) for retail purchase, and is offered in espresso drinks by the baristas at June's All Day. "People are very passionate about their coffee and what they're putting in it," says Fronk, explaining that she plans to reach out to many more coffee shops in 2018. "If you're going to a place that has excellent coffee and have to put generic junk in it," she says with a shrug, "it kind of defeats the purpose."

The quality beverage arrives in an equally classy glass bottle. FÖDA, a local graphic design studio and brand consultancy, was Fronk's first choice when it came to the packaging. "They've done – I think – some of the best restaurants in town," she says, "so I reached out to them right off the bat. Each of the three flavors comes in a unique bottle. "One of the designers looked into the history of the ingredients – the almonds, the cocoa, and cinnamon – and the origins of where they came from, and used that to inspire the pattern motifs," she explains. "I love how they turned out, and I feel like it's a tiny piece of art." The delivery trucks will take back empty bottles so they can be sanitized and reused, but often Fronk will receive photos from customers of how they've repurposed the beautiful glassware in their homes.

Recycling isn't the only way Fronks is trying to reduce their footprint. After squeezing the milk from the blended nut mixture, a significant amount of pulp is left over. "We've been experimenting," she says, describing coconut energy balls that have become a favorite snack. Fronks shares their commercial kitchen space with a gluten-free baker and a vegan bakery, who have also been making treats, including pie crusts. "It's fun to be able to attempt a zero-waste model," says the enthusiastic home cook. "You can make a cashew cheese out of it," she says as her eyes light up. "That's on my list next."

A version of this article appeared in print on January 5, 2018 with the headline: Soak, Sprout, Blend