Dine in Austin’s Petite Provence, speak French, and go back to basics 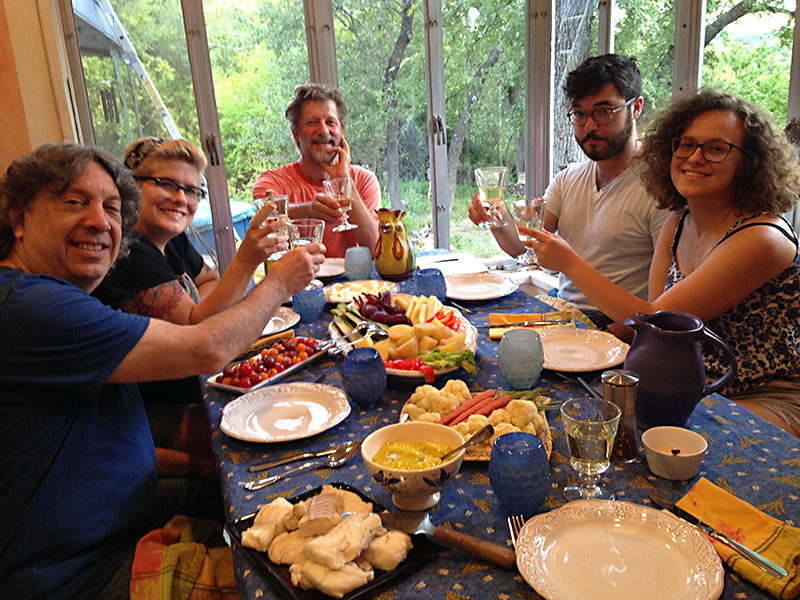 In a sunny, glass-enclosed kitchen, a pot of water bubbles away and the methodical clicking of a knife on wood welcomes students to class. Slowly they trickle in, and as each student crosses the threshold of this West Austin home, they find themselves transported to Provence. The boldly colored walls are filled with art, and sunshine carries the scents of Mediterranean herbs on its rays as they drift out of the kitchen. Eagerly, everyone gathers around a roughly hewn wooden table to begin their lesson.

At Valérie Chaussonnet's house, lesson time means dinner time, and dinner is an immersive experience. Everything from the decor to the food – and most importantly the language – are all French. For a moment, you feel as if you've actually found yourself in a French countryside home. "We pretend that we're in France," Chaussonnet explains. "People have a good time and they really get to practice." Almost all this practice happens with eight students around the dinner table. "But that's French," the host offers with a shrug. Like many things about her home, this intimate classroom setting seems primed to foster conversation.

"It's like a supper club," Chaussonnet explains. Those that register for a French course are fed dinner as part of their tuition. As a teaching technique, food has the natural tendency to incite conversation. "I feed them as a distraction, and we also talk about the food." Having such a purposeful dinner is a way of making people forget they're in a language class. Students are inspired to search for descriptions of their favorite memories, flavors, textures, scents, and colors in each dish in order to express their enjoyment of a meal or their recommendations for improvement. Plus, a French meal is naturally accompanied by wine, which, Chaussonnet admits with a mischievous twinkle in her eye, is a foolproof way to break down barriers and get conversation flowing.

"Most of my students have been in France and they come back with a craving and an interest in the food, so we talk about it," Chaussonnet says. "They engage because they have stories associated with the food." From this common starting point, the talk effortlessly ebbs and flows, touching subjects from travel to children. Per house rules, politics are never allowed to enter the conversation.

As an anthropologist, Chaussonnet explains her philosophy behind teaching the French language: In order for learning to happen successfully, students must involve a cultural component into their lessons. For that reason, she says, "I use classic French recipes." In her house, however, meals are vegetarian (and organic), so that everyone can enjoy the meal. "Even if people are big meat-eaters, they're just going to be in better health if they eat once a week without meat. I think they can survive," she says with a wry smile. 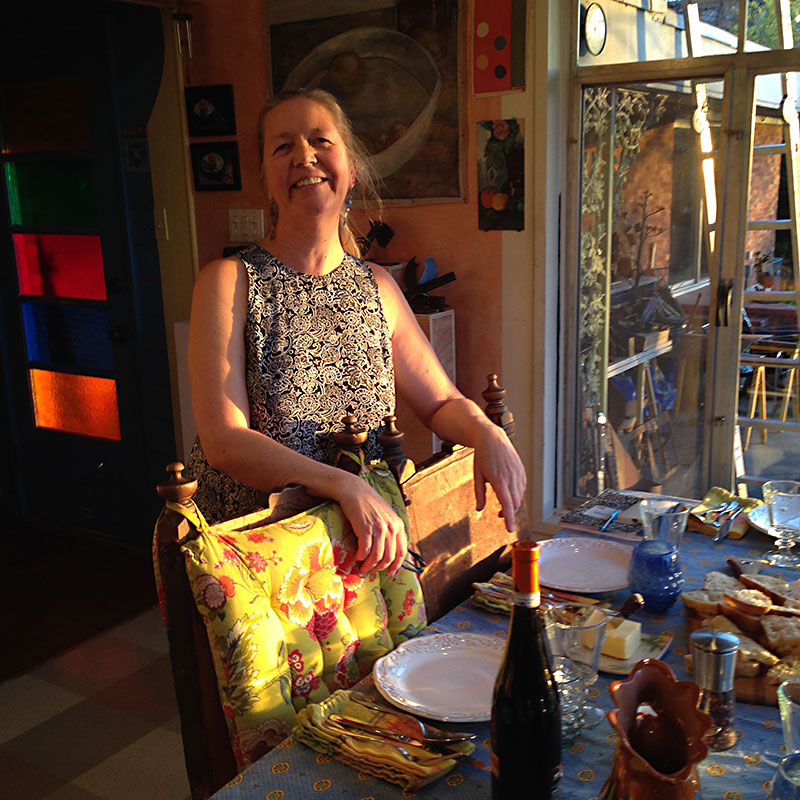 Although some evenings involve crepes, elaborate desserts, or the occasional Russian dish (she spent a few years living and working in Russia), most consist of a simple pairing of soup and salad. This rudimentary meal is often accompanied by cheese, wine, and, of course, bread. "I get beautiful bread," coos Chaussonnet as she displays the rusticity of the grain that looks like it was made to sop up a hearty broth. Bread, she explains, is an essential part of any true provincial French meal. It also helps soak up the copious amount of wine that can appear at the dinner table. "Sometimes we have four bottles of wine for eight people," she laughs. "So, I put 'mercredi' on the bottle and keep it for the next Wednesday." After all, French education is a responsible endeavor.

The seed for these culinary-centered classes was planted over two decades ago when Chaussonnet began an informal French day care to teach her own children French in the company of their peers. As in most child care centers, they played games, made snacks together, and cultivated everyday problem solving. The difference was that the entire day was spent conversing in French. Unsurprisingly, it wasn't long until the parents recognized the efficacy of her model and began requesting classes for themselves. Chaussonnet took the request to heart, and her day care quickly evolved into adult language learning lessons at La Petite Provence. French education through a food focus is, however, the latest incarnation of a decades-old teaching model.

With a Breton for a mother, and a father who hails from southwestern France, Chaussonnet was exposed to an expansive repertoire of recipes in her childhood which set the foundation for her fascination with food later in life. However, in France, her interest in gastronomy wasn't unusual. She remembers being in school and having whispered conversations with her classmates about what they had for dinner the night before. She recalls having as a child a "long conversation about whether there should be onions in the gratin dauphinois or not." These moments, she says, encapsulate the French experience, which is what she is trying to re-create for her students.

"Food in France is so central," she asserts. But it is not the haute cuisine of 5-star Michelin restaurants that is the lifeblood of l'hexagone. Life is found in the provincial dishes that have been handed down from generation to generation. Beautiful for their utilitarian and nourishing nature, the no-frills French food that Chaussonnet shares with her students is also an unadorned glimpse into the culture that created the food and the language that so many embrace. "I make it really French," insists Chaussonnet. "It's not fancy." A glance into her kitchen shows her claim to be true. Like Coco Chanel's little black dress, the kitchen is brimming with basics. Ingredients are stacked together thoughtfully as if already poised to become a dish, but each one is capable of being used in a variety of recipes. For Valérie Chaussonnet, this pared-down approach to French food is the true essence of life in Provence: Simplicity is the true beauty of French cuisine.