Brenham’s Brazos Valley Brewing Is a Destination, Not a Pit Stop

"It's what's on the inside that counts" 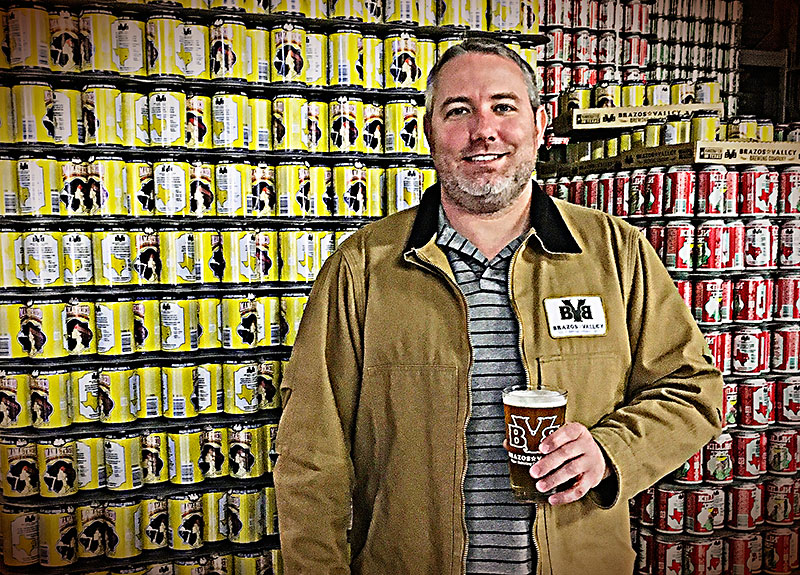 Like a lot of people, I base many of my unplanned supermarket purchases purely on aesthetics. On how thrilled each one of those beautifully branded boxes of enamel-stripping breakfast cereals or tubes of beetroot chocolate wasabi snack chips make me feel. On their potential to become a multi-colored contract of imminent leisure and merriment enforceable by the International Laws of the Netflix Binge Night.

Craft beer is this way – aluminum billboards packaged into small showpieces of Futura Bold typeface telling you about hops and honesty and the geographic coordinates of the farm where their spent grain is sent to help foster seeing-eye ponies. I linger too long in front of those massive supermarket beer walls, anxious that a night of porch drinking will be defiled by average beer dressed in high-fidelity branding. One might reasonably suspect that if a brewer cares as much about what's going on inside the can as he does outside of it, the liquid itself would be twice as smashing. Brands like Austin Beerworks and San Diego's Modern Times are examples of this creativity consolidation: great branding, great beer.

But craft beer is typically not a game of what-ifs. It's a game of what is. Bad beer in clever packaging happens all the time – a total scam of your $13.89, and an efficient method for a brewery to cross the rubicon into the land of utter distrust. But let's face it, those breweries have more of a shot with your weekly $13-plus-tax than do most. If you can't impress us with the outside of the can, you're missing the impulse market entirely. As a chef might point out, "You eat with your eyes first."

A single outlier recently entered my periphery to challenge my rather ridiculous theory of a correlation between beer branding and beer quality. Brazos Valley Brewing out of Brenham, Texas, is a brand so inelegant amongst the massive catacombs of potable aluminum options that it makes Steve Buscemi look like Channing Tatum. Perhaps your radar drifted past BVB, too. The branding itself is reminiscent of common wallpaper – not to cover any defects of the beer itself – but because BVB is a low hum in an otherwise balanced symphony of artistry. 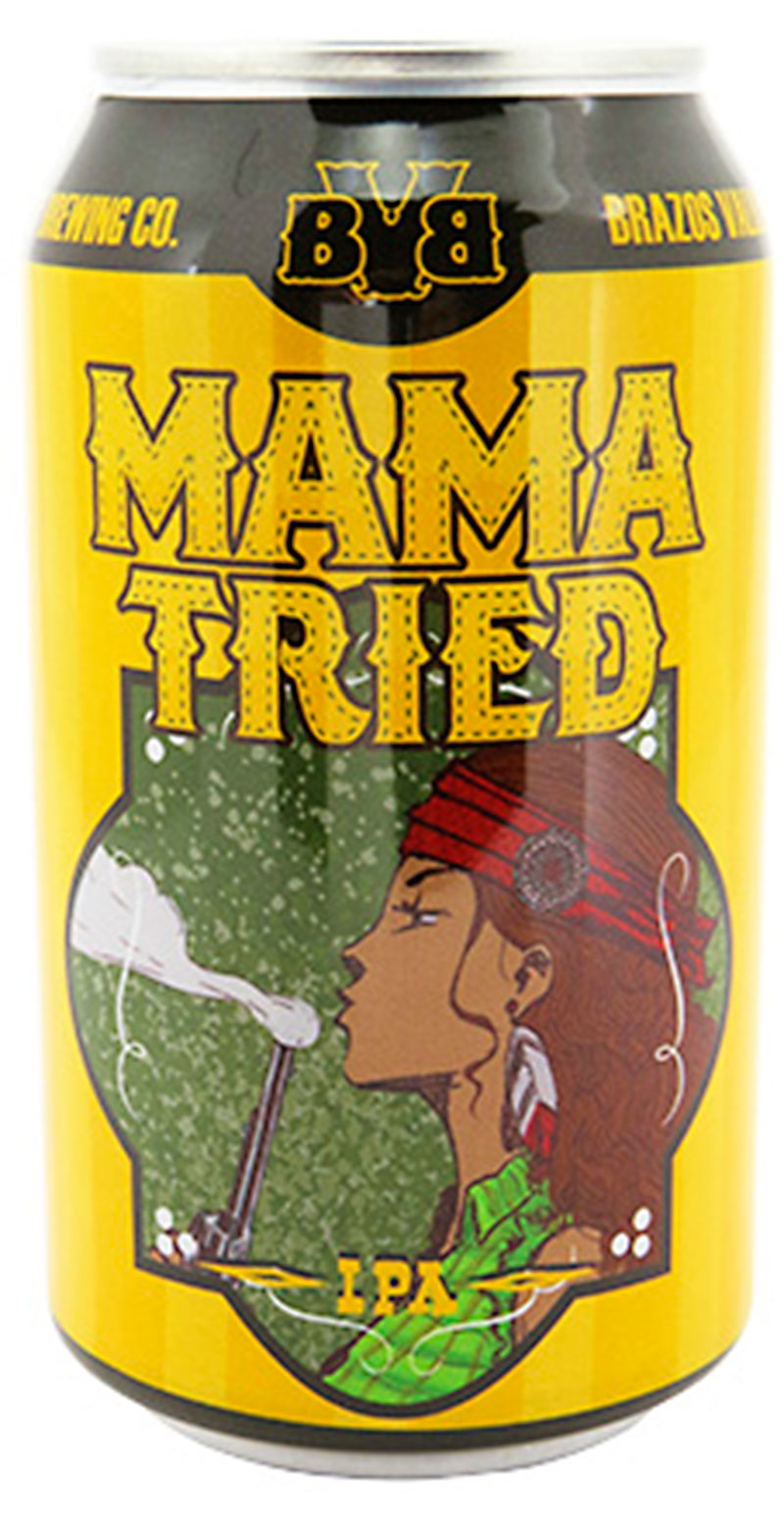 But where BVB shines is in the cliched edict, "It's what's on the inside that counts." BVB's clever use of legacy and experimental hops showcases amazing brewing talent in Brenham, as the brewery features a top-shelf spectrum of well-composed IPAs, particularly with their flagship beer, Mama Tried Citra IPA. "We have become a hop-forward brewery by personal preference combined with natural progression more than anything," asserts Joshua Bass, co-founder and brewery manager of BVB. "All of our IPAs were created to please our own palates, and the market has responded. Mama Tried is our most popular beer. We wanted to come up with an IPA that highlighted the floral fruitiness of hops rather than the classic pine and resin bitterness. It was a change from our original IPA recipe, and pretty much all of our IPAs follow this style now."

Indeed, Mama Tried is a smash hit, abundant with the outlaw of hop varietals: Citra, a popular flavoring hop whose influence reaches some of the country's most fiercely sought-after beers like Toppling Goliath's PseudoSue, Three Floyds' Zombie Dust, and Lone Pint's Yellow Rose. Mama Tried is an intensely citric and floral ode to Merle, whose ballads were also bittered and juicy for optimal consumption. At 6.6% ABV, Mama Tried is a tropical fruit pick-me-up for the honky-tonk in Drunkytown. Mean­while, BVB's mosaic-drenched, Willin', is a dialed-in IPA for front porch lounging in a claw-foot tub, wearing a straw cowboy hat to block out the sunset, with its muddled stone fruit and earthy flavors. I like to think that BVB brews their beers to pair with very specific, rustic Texas experiences in mind.

For a 20-barrel brewhouse – a rather modest production for a regional brewery in an atomically hot brewing territory – BVB is hyper-focused on the research and development of new recipes. "Our B-sides and Rari­ties rotating series has given us the perfect opportunity to experiment with a bunch of different hops on a larger scale," explains Bass. Indeed, BVB's rotational and seasonal programming has been an excellent way for the brewery to showcase their talent through small-batch reveals in interesting ways, like the indulgent Big Spoon Tres Leches Stout; a bright, albeit impossibly named High Noon Vic Secret IPA; the Ekuanot-employing Pancho IPA; and, of course its partner in thirst murder, Lefty IPA.

"We have found that country outlaw culture is something that's embraced by almost every Texan," decrees Bass. "Even the most progressive twentysomething living in the city. It's just a part of that basic Texan identity that we all share and embrace."

True, even the hipsterest, scooter-riding, junior CEO beer knowers would be caught dead with a first-pressing vinyl of Red Headed Stranger and an IPA whose can design mimics a benign gig poster from Austin's Armadillo World Headquarters. Bass adds, "We feel our branding is true to who we are as people and our philosophy on life, while at the same time, is something that has a special place in the heart of many Texans, young and old."

Well, fine. Their branding is growing on me as I begin to understand the brewery's overall ethos: memorable, lovable underdogs with supersonic expectations. Kind of like Aggies. I did mention that BVB is owned and run by Aggies, right? (But the good kind, like Lyle Lovett and Robert Earl Keen and Dat Nguyen and my buddy Cody who once told me that the Kings of Leon were a wildcard for bedroom romantic ambience. I don't know what he meant by that, but I like that he let me behind the maroon curtain.) In our desperation to believe in magic – like hiring a coach for $75 million and expecting the '05 Longhorns – BVB is a safe gamble. A great gamble even. They should continue to take risks without overburdening their system. And you know what, they don't even have to over-commercialize their brand. They make brilliant beer.

They won't let the moment get too big for them. Or the town. BVB's website prominently states a seemingly indisputable craft beer manifesto: "We like to drink good beer. That's not complicated, right?" BVB is downright uncomplicated, if not bucolic.

"Brenham is wonderful," Bass affirms. "The city and citizens have been very supportive since we opened [and] the city is growing and embracing change while still maintaining [its] small-town Texas vibe. Brenham is a lot like the brewery itself. We are who we are, and [we] appreciate where we came from, but we also love to create and grow."