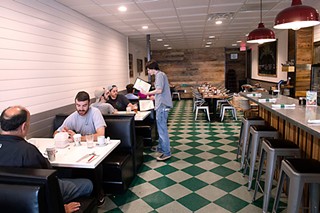 Diners house the history of America, for better or worse. The quintessential stories of first-date coffee & pie and Sunday brunch mimosas don't overshadow the memories of segregated counter service and single moms working graveyard shifts. The bitterness cuts the sweet, but the slow simmer of the casual breakfast restaurant is an important part of our melting pot. 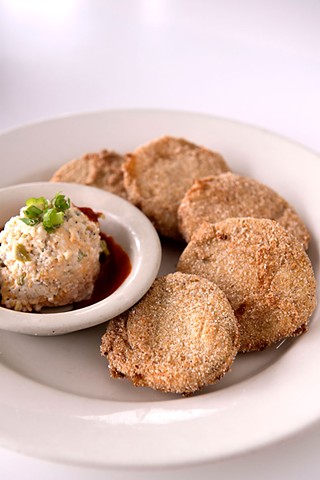 A few doors down from neighborhood favorite Winebelly is a new daytime dining spot in the '04. Along with the Winebelly team, chef Camden Stuerzenberger (Fork & Vine, Bess Bistro, South Congress Cafe) opened Phoebe's Diner (named for his first child) this summer. Their aim is to serve classic American diner food, or as they put it, "greasy spoon favorites with a touch of smoke." 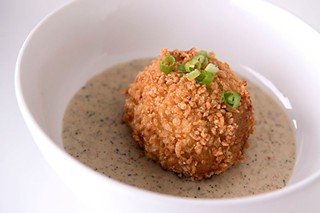 In the era of the internet, the accuracy of online menus is essential. Either have one and update it to reflect big changes, or don't have one at all. Phoebe's menu features breakfast, brunch, and lunch, and predominantly offers what you'd imagine diner food to be, only revved up and modernized. They also list creative daily specials on a chalkboard behind the long bar accompanied by 10 or so stools. (Reportedly, they have plans to build a patio in the back, which, I believe, will be a winning decision.) 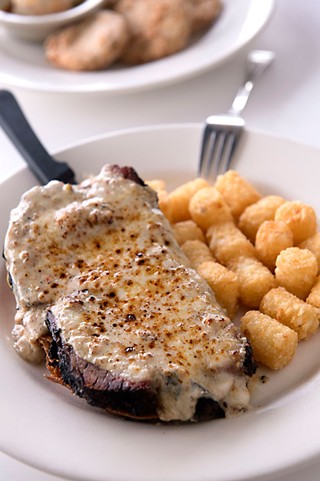 The menu is laden with heavy, big-portioned dishes, so when I perused it on their website, I set my sights on the Choppin' Block salad. Upon being seated, I saw that, actually, only a side salad is available. Where in the world did the promising "Lite" section go? The house salad was fresh and just fine, save for one oddball add-in: smoked beets. The diced magenta pieces had almost all of the root veggie's raw crunch, but with a smoke bomb tucked inside. As I convinced each companion to eat one of the pretty little cubes, the same question arose on repeat: Why? That said, all but one of the other dishes eaten on that visit were varying degrees of delicious. Cornmeal-battered and lightly fried, the fried green tomatoes ($8) were a big hit, and the accompanying house-made pimento cheese (served drizzled with Cholula-esque hot sauce in this appetizer) justifies a drive from north of the river. Another home run is the Cheeky Monkey ($8). Described as a six-minute egg wrapped in sausage, potatoes, and smoked cheddar, battered and deep-fried to a golden brown, and placed atop a pool of zesty sage sausage gravy, it turned out to be more of a seven-minute egg (with less yolky ooze than anticipated), though still devourable.

Mimosas are the official drink of brunch, and Phoebe's offers a good ratio of juice to bubbles at a pretty fair market value, and the honey tangerine and strawberry lemon fresh fruit add-ins were a real treat. It's worth noting that our server, along with all the staff we encountered, was helpful without being obtrusive. Creating a relaxed, casual vibe seems to be a focus: The collective voice never broke a tolerable sound barrier, the decor is pleasant but not flashy, the furniture is comfy, and surprisingly, despite "smoke" being all over the menu, the restaurant's scent does not permeate your hair or clothes or brain. Phoebe's Diner is a nice place to be.

Fair reviews means sometimes delivering bad news, so let's get through this somber portion quickly: The chorizo sope ($9) is terminal, and it needs to be put down. It's the humane thing to do. Billed as "crispy masa cake, chorizo, egg, guacamole, pickled chiles," I was excited for some sort of twist on the Mexican classic. What I received made me sad. It appeared to be an attempt at a deconstructed sope, where, instead of the cake, there were two small balls of fried masa, but inside the consistency was like Elmer's glue. The rest of the bowl reminded me of a big party gone wrong. It was loud and busy and full of all kinds of ingredients, but absolutely none of them talked to each other. A hunk of sweet potato sat awkwardly on one side, the chorizo (usually a bold personality) was drowning in mystery juice at the bottom, and the poor egg yolks were busted before they arrived. I could go on, but the point is, it's time to say goodbye to this chorizo sope.

Moving on, the Mr. Crunch sandwich ($12) could easily be split with a buddy. Served open-faced with a side of standard-issue tater tots (if it ain't broke ...), thick sourdough is layered with deli mustard, smoked brisket, and covered in melted Swiss cheese. While the menu claims that tasty gravy is in there somewhere, too, neither I nor my companion who bore the brunt of that beast-mode dish can definitively recall it being there. Shrimp & grits is a brunch mainstay, and this diner's version ($13) has some fun twists with creamy goat cheese grits and mildly spicy Hatch chile hollandaise. (Throw a few more shrimp in there, though, y'all.) Chef Stuerzenberger has a penchant for serving hearty, carnivorous dishes, and the thick-cut, pan-seared ham on the Phoebe's Benedict ($10) stays true. My only notes about the blue-collar breakfast platter of champions – Badass Bacon & Eggs ($11) – are that an option for toast would be cool, and "Wow!" regarding, again, the thickness of that bacon slab. Since the style of side potatoes can be a point of contention, rest assured their hash brown casserole side is tasty, with a good mix of real shredded potatoes and creamy goodness.

A restaurant that puts all their eggs in the 7am-3pm basket needs to have to-go orders down to an art form, and Phoebe's Diner does. Again with that menu tease, I wanted the macaroni & cheese, but it's also no longer on the menu. The diner burger – two thin flat-top patties with diced tomatoes, unpretentious American cheese, and spinach instead of lettuce – is solid. The special – bacon-wrapped meatloaf with mashed sweet potatoes and fried spinach – was big enough for two meals. The whole spread was flavorful, but (to the tune of the Eurythmics' hit), here come the beets again, this time snuck inside the meatloaf. Why?

While there are certainly some kinks to work out, I have no doubt that Phoebe's will find their menu footing and really embrace that good memory-making space. Where Everybody Knows Your Name
What makes Winebelly a neighborhood gem