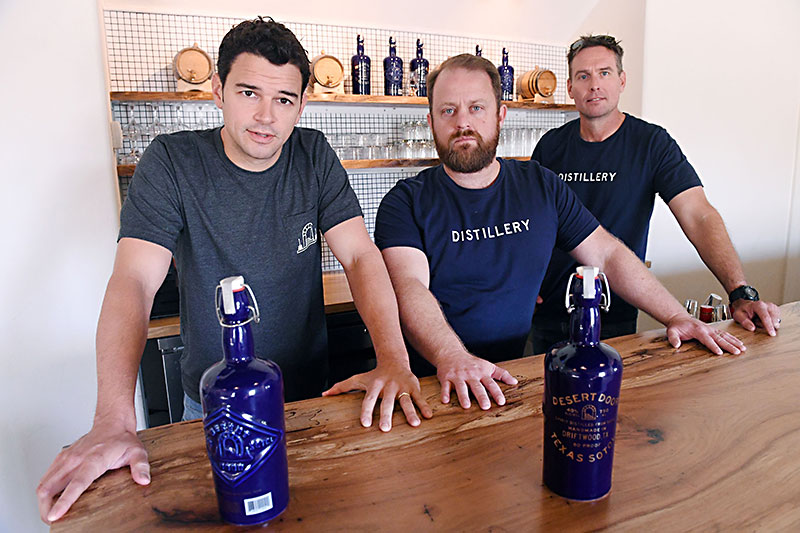 From the outside, the Desert Door sotol distillery and tasting room out in Driftwood looks like just another Hill Country warehouse, down to the signature white rock – the primary architectural characteristic of Central Texas. Step inside, though, and it's a light, airy room with high ceilings, long wooden tables, and ample comfortable seating. From the fireplace-adjacent leather couches to the cream-colored sling chairs and elegant footstools, entering the Desert Door tasting room almost feels like walking into your wealthy rancher friend's living room.

Says Brent Looby, who started Desert Door along with Ryan Campbell and Judson Kauffman, of the space and its design ethos: "What are we trying to evoke? This is a desert spirit. What we're trying to do is take something old and bring it forward." This is made visible in the tasting room with clean lines and a marriage of wood and leather and overstuffed pillows. "We want to make sotol relevant to today, while also maintaining the integrity of its heritage."

The heritage of sotol is a fraught one – both in Texas and Mexico, the country with which it is most closely associated. Rock wall drawings in the Four Corners region of the Southwest indicate that the sotol plant was an integral part of the Ancient Pueblo people circa 7000BC, from its use in weaving baskets, ropes, mats, and sandals to its edible, artichoke-like core. There's also evidence that pre-Columbian people drank a concoction made from cooked and fermented sotol hearts – called piña – for their religious ceremonies. According to Tales of the Cocktail (a New Orleans-based premier cocktail festival), sotol is widely believed in folk medicine circles to heal a variety of routine ailments.

When the Spanish colonized Mexico, they brought European distilling techniques with them and taught the locals how to make a spirit out of the dasylirion plant, also known as desert spoon. Sotol in Mexico (mainly in Chi­hua­hua, but also as far south as Oaxaca) was closely associated with lower rungs of the socioeconomic ladder. Hugh S. Johnson, an administrator in FDR's New Deal cabinet, reacted to the Night of the Long Knives in Germany in July of 1934 by saying, "I have seen something of that sort in Mexico during the Villa ravages and among semi-civilized people or savages half-drunk on sotol and marijuana. But that such a thing should happen in a country of some supposed culture passes comprehension."

Even today, the way people talk about sotol evokes images of "savages" and traffics in stale, often offensive stereotypes and assumptions. Tales of the Cocktail refers to sotol as "tequila's crazy little brother." The Desert Door website refers to sotol as "the firewater of peasants" and crafts a narrative of the spirit complete with a trickster coyote (closely associated with Navajo myth) and an image of a Nat­ive American man clad in vaguely Plains nation leathers. These are problematic semiotics – to be sure – but perhaps that's because until this point, it's the only vocabulary used to talk about sotol. Desert Door can add some nuance to that narrative because the script is being written as they go. 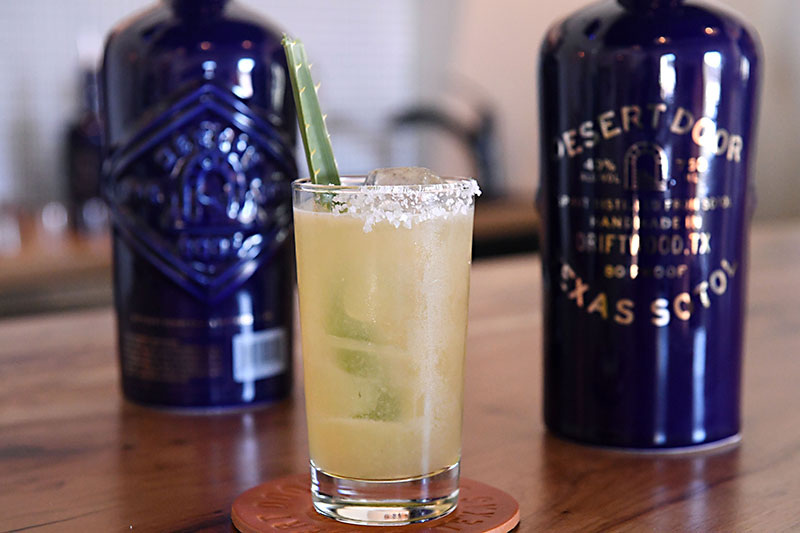 Photo by John Anderson
“This is a desert spirit. What we’re trying to do is take something old and bring it forward. ... We want to make sotol relevant to today, while also maintaining the integrity of its heritage.” – Brent Looby

Desert Door's operators have access to 75,000 acres in West Texas that are covered in Texas sotol plants. "If you drive out on I-10 and you get out just past Ozona, you'd think it was a crop," says Campbell. "There are a thousand plants in an acre. For the ranchers that own that land, it's just a plant that grows on their property." So, how did three military veterans land on the idea of taking West Texas scrub and turning it into booze?

It started with the discovery that turning vegetables into alcohol was in Kauffman's blood. "When I got out of the Navy in 2010, I was doing a lot of genealogical research and stumbled across information about a great-great-great-grandfather who had come over from Germany in 1843 to Cincinnati. He built a brewery in Cincinnati and it became one of the most successful of its day. That was pretty meaningful to me because I was searching for an identity."

Kauffman adds, "I started toying with the idea of making booze, and reached out to Dan Garrison, who started Garrison Brothers ["the first and oldest legal whiskey distillery in Texas," according to their website]. My whole idea was to copy his idea. But when he got back to me with his notes, including start-up costs, that was the end of the dream for me because I didn't have access to that kind of money. So I put that dream on the back burner and went a different way."

Kauffman's path led him to the MBA program at the University of Texas, where he met Looby and Campbell in the McCombs School of Business, where the three were tasked with coming up with a business idea – from concept to possible launch. As they cast about for ideas, Kauffman recalled tales of his West Texas relatives drinking "soto," which they reported was terrible, foul stuff. But there was a gap in the Texas spirit market, so the team proceeded apace.

"There isn't a product that's uniquely Texas," says Campbell. "There are some Mexican sotols out there. They use a different species of plant than we use. What's more Texan than something made from a plant that grows only in Texas? It's got Texas in its name [Dasylirion texanum]. It's made by Texans in Texas."

This uniquely Texan identity is writ large on the Desert Door website, especially on the "Makers" page, which features profile photos of Campbell, Kauffman, and Looby posed with axes in hand, their faces obscured by the shadows cast by their cowboy hats – an image that might make the Marlboro Man feel emasculated. "The masculinity of the brand is probably a reflection of our interpretation of Texas, how we see it in the ruggedness of the plant," says Campbell.

"When you go out to West Texas and you wrap your hands around this plant, it's not elegant, it's not pristine," says Looby. "We're all three veterans. I flew in the Marine Corps for 20-plus years. Judson was a Navy SEAL sniper. Ryan, Army intel. It's not just that those are rugged photos, that's just another facet of the people that you're talking to."

The vigor of the brand stands in stark contrast to the flavor of Desert Door's silver sotol (they also offer a smokier oak-aged version), which is delicate, herbaceous, and just a tiny bit sweet. It can be enjoyed straight, and is available by the bottle on-site, but the Driftwood tasting room offers a variety of cocktails meant to showcase the spirit. It sets the West Texas terroir against flavors like grapefruit, coffee, and elderflower. The irony of such muscular branding for such a subtle spirit would be humorous if it didn't perfectly sum up the ways in which Texas contains multitudes.

Texas is an increasingly diverse land, with a complicated past, present, and future. It's rough and cosmopolitan, progressive and old-fashioned. In many ways, Desert Door encapsulates all of those multiple identities while also looking to the future, forging previously forbidden and uncharted paths. As they launch their new venture (including statewide distribution in early 2018), the men of Desert Door Dis­til­lery find themselves straddling the past and the present, hoping to capture lightning in a bottle.

A version of this article appeared in print on December 1, 2017 with the headline: The New White Lightning