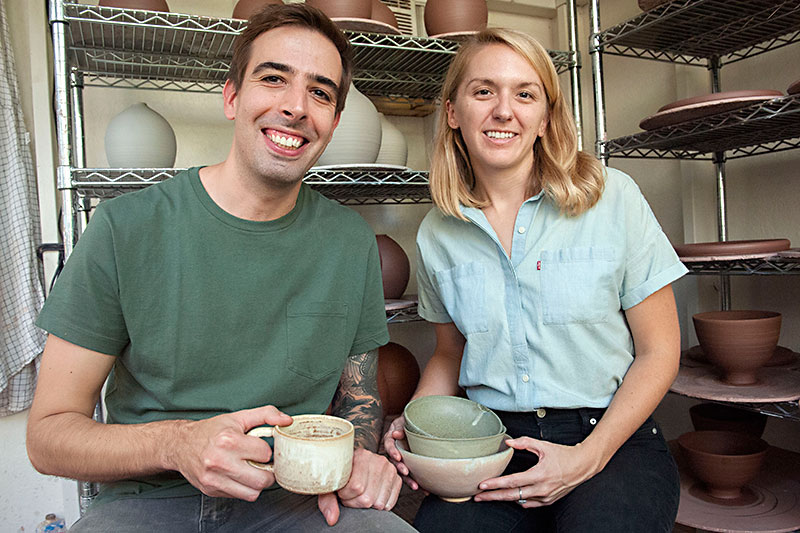 It's not just the food at culinary hotbeds like Barley Swine, Parkside, and Uchiko that we're drooling over: Lovely plates and bowls are the foundation of every dish. While top chef plating skills might be out of reach, upping the table-setting game is an achievable way to make a bold dining statement. "The criteria is whether we want to use it in our own kitchen," Lindsey Wohlgemuth writes from Ruidoso, N.M., "and if food looks good on it."

Wohlgemuth and Dimitar Karaytchev are the husband-and-wife makers of Era Ceramics. They spoke with the Chronicle via email while on a Southwestern road trip that included stops at the Chinati Foundation in Marfa, Texas, and red rocks of Sedona, Ariz.

"The first time I 'cooked' for Dimitar, I made him a PB&J and served it on a paper plate," writes Wohlgemuth. "The first time he cooked for me, he made crêpes." She credits her cooking skills to him, and he learned about working with clay through her. Karay­tchev was in the graphic/interactive design field while Wohlgemuth was in painting and ceramics, but the pair had wanted to work together creatively since they met in art class at UT over a decade ago. "After being around it for a while (literally in our living room), I started learning more about the process and material," writes Karaytchev, "and it didn't feel like a giant leap to move to a different medium." 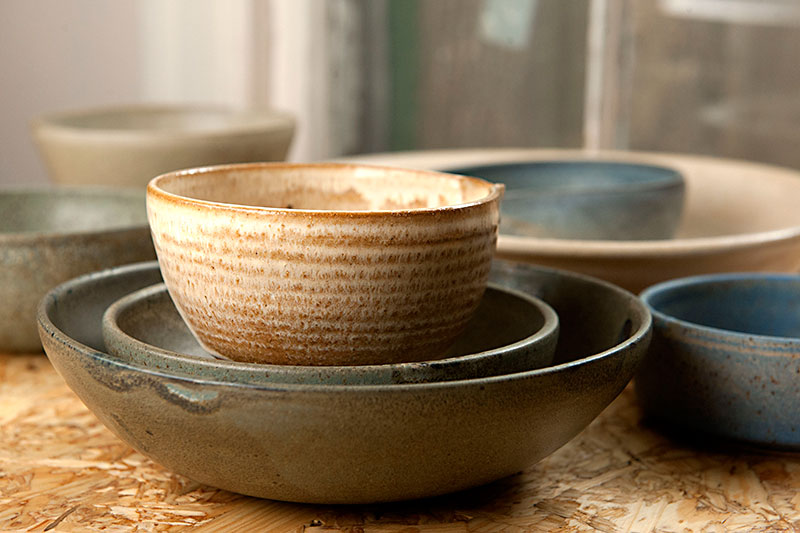 Another thing they share is a love of entertaining, and that's how the idea of dinnerware was conceived. An exclusive collection – Mira – was designed for Kettle & Brine and can be ogled over at the kitchen supply shop's Downtown showroom. Four distinct pieces can be mixed or matched to make a set, and come in three matte glazes (charcoal, oatmeal, and speckle). Rims are left raw and unglazed, letting the natural brown clay both accent and tie the collection together. It's no wonder notable restaurants including ATX Cocina, Kemuri Tatsu-ya, Olive & June, Picnik, Pitchfork Pretty, and recently opened Yuyo have chosen Era's organic aesthetic to complete the dining experience.

"There is a pretty tight community within the restaurant industry," writes Wohlgemuth, "and everyone is aware of who is doing what." In 2014, Era vended at Feliz – their first craft show – and there they met Natalie Davis of Canoe Goods, who is also co-owner of Salt & Time, along with her husband Ben Runkle. They commissioned some small bowls for Salt & Time, and Parkside Projects' Shawn Cirkiel was at an industry event there, where he spotted the vessels. Cirkiel reached out when Bullfight was preparing to open, and word has continued to spread on the local – and national – scene. This spring, the couple met Joshua McFadden of Port­land's Tusk during Aaron Franklin's Hot Luck Fest, and now their dishes are featured in the haute Pacific Northwest eatery as well as on the pages of McFadden's cookbook. "We absolutely love working with chefs," says Wohlgemuth. "We share the same goal of making the food look really good on the table."

Era Ceramics are stocked at Kettle & Brine and Fail Collective. Larger platters, serving bowls, and one-of-a-kind items are sold at various holiday craft shows, the next of which is the Blue Genie Art Bazaar opening on Black Friday.

A version of this article appeared in print on November 24, 2017 with the headline: Organic Aesthetic