Coffee With a Conscience

Local roasters give consumers a taste of culture and community 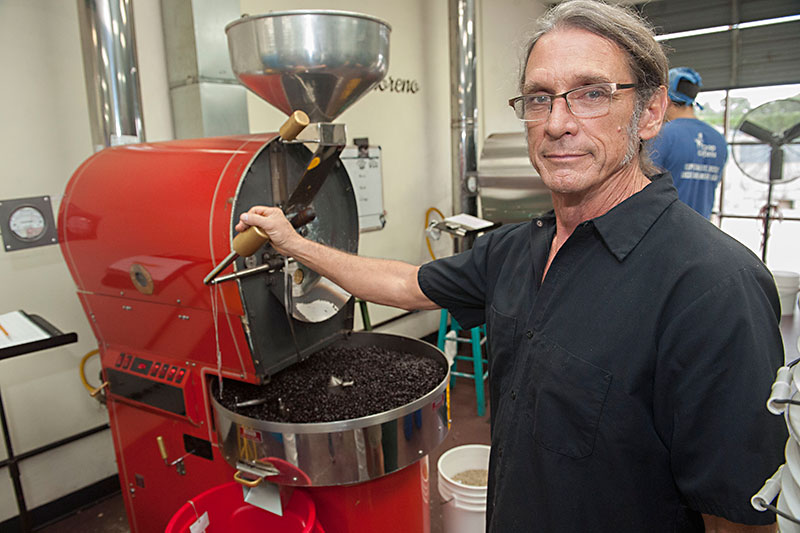 Before that first sip of liquid energy, morning thoughts are often somewhat akin to a sputtering engine trying to turn over. But just because your brain isn't firing on all pistons doesn't mean your taste buds have forgotten about quality or your conscience has foregone ethics. When it comes to cutting through the fog, it can be difficult to care if your coffee is transparently sourced or farmers have been adequately paid.

With coffee's growing reputation as a beverage that ought to be enjoyed more like wine than a daily fix, coffee lovers are focused on the flavor notes and aromas with the intensity of a trained Q grader – a sort of coffee sommelier. Several local roasters are taking advantage of this renaissance, capitalizing on the culinary fascination with coffee to teach us about the behind-the-scenes industry effects brewed into each cup.

For Trey Cobb and Khanh Trang of Greater Goods, contentiousness in the coffee industry can be just as important on this side of the border as the other. They began their venture simply because of a love of coffee, but the pair soon recognized a deep desire to share with their community, and it didn't take long for generosity to become the primary force behind their company. Currently four Austin charities are the principal recipients of Greater Goods' significant donations, and each charity is tied to three different regularly sold coffees.

“Hopefully they’re supporting a cause they love and we’re exposing them to a coffee that they’ll fall in love with.” – Trey Cobb, Greater Goods

"We vetted a lot of charities before we chose the four we're working with now, just to make sure they were putting community first with the donations, [and] not just driving the focus to awareness," notes Cobb. Austin Pets Alive! receives $1.12 per bag, the Boys & Girls Club subsidizes the cost of a club day with help from $2 per bag, the Autism Society of Central Texas earns $1 per bag, and $1 from each bag feeds a family four meals through the Central Texas Food Bank.

Although giving back is vital to Greater Goods, Cobb explained that coffee can offer yet an even greater impact by opening consumers up to the world through flavors. "Hopefully they're supporting a cause they love and we're exposing them to a coffee that they'll fall in love with," he says.

Despite the copious amounts of caffeine being distributed through Texas Coffee Traders' bustling warehouse, owner RC Beall approaches coffee with a yogi-like calm. For him, coffee is an equalizing force, one that is there to please the customer and improve the lives of those who produce it.

As one of the first 40 coffee roasters in the U.S., Beall said he remembers when "fair trade wasn't even a thought process." Nevertheless, he recalls being baffled that no one thought it prudent to pay for quality. "Most of the coffees at the level that we operate at, they're grown under good conditions, they're grown with good conscience, they're grown in the best growing areas, and the people that take care of these coffees care what's going on," he says. As a result, "It's been years since I've paid fair trade prices; we've always paid higher prices."

To illuminate the reasoning behind his approach, Beall explains that he views the end goal of the coffee business not through the sales lens but everyday actions aimed at making the lives of customers and the community better. "You basically are selling a memory," he says. "The emotional part that is nonverbal is perhaps a truer understanding of if it's a good thing."

When Joe Lozano began roasting coffee in January of 1994, he just needed a job. So, like many upstart roasters at the time, Lozano admitted, "I knew when coffee was good or not, but I had no idea about people's lives." However, unlike many other roasters, when the opportunity to invest in a coffee co-op presented itself, he chose to disregard the old-fashioned advice that co-ops are bad investments. He became a founding member 16 years ago.

Despite his career-long investment in helping farmers earn fair wages, Lozano says, "I would say only 25 percent of my customers know about what we do. The rest don't care." Nevertheless, at Third Coast Cof­fee, helping coffee producers is at the heart of the operation.

Although his business model appears to be heartfelt and altruistic, Lozano insisted that it's just good business. "The more coffee I sell, the better the farmer benefits. The better interaction I have with the farmer, the higher the quality gets," he explains. Because his co-op requires a specialty grade of 80 or higher, consistency, in effect, becomes quality. "Plus," he adds, "as a coffee roaster, I have to buy beans from somewhere. The idea that I know who it is and that the money goes directly to them, I find that really nice."

At Casa Brasil, if customers are curious about farming practices and agricultural compensation, they can trace their coffee all the way back to the Brazilian micro-region in which it was farmed.

According to head roaster Eric Wolf, this traceability is due to the dedication of Casa Brasil's owner Joel Shuler, who lives at the crossroads of it all in Brazil's Minas Gerais region. "Joel's been really able to learn things on the ground and help improve quality," explains Wolf. With a master's degree in agricultural engineering and a specialization in post-harvest processing, Shuler has quietly changed Brazilian farmers' relationship to coffee. "[With] the same farms we buy [from] year over year, we see the quality improve," says Wolf.

General Manager Ian Myers added that this is Shuler's specialization. By experimenting with Brazilian terroir best practices, Shuler has slowly transferred his expert knowledge to native farmers while guaranteeing an above commodity price to those who strive to implement those practices. Through this approach, Casa Brasil has managed to stabilize a portion of the coffee industry in Brazil.

Wolf summed it up succinctly saying that it all boils down to individual relationships with farmers. "If we can pay what the coffee is worth, then it's incentive for them to take the steps to improve the quality," he insists.

For Michael Shewmake and Jordan Rose­nacker of Atlas Coffee Club, coffee is the perfect travel narrative. With more than 50 countries that produce coffee, these self-proclaimed coffee tour guides have found that by offering their subscribers single-origin coffees from a different country each month, suddenly a cup of joe becomes an exploratory experience where there is not only a connection to flavor profiles, but also to the cultures in the countries where the beans are produced.

"The idea," says Rose­nacker, "is to transform a morning coffee routine into an appreciation through a little bit of an adventure." Although the folks at Atlas can't offer each of their subscribers a plane ticket to visit the coffee plantations, they strive to showcase the uniqueness through the packaging. "The bags we created were inspired by local textiles and landscapes to further connect consumers," explains Rosenacker.

Without the company's branding emblazoned on top, the coffee club's packaging effectively becomes a postcard. To ensure that the coffee's story isn't lost, every bag of coffee includes a real postcard containing coffee notes, coffee history, brewing instructions, and tasting notes. "We want to connect consumer to country," Rosenacker says with a shrug. "When you know more, your coffee addiction is paying off in a way."