As the City Strives for Zero Waste, Where Does Food Fit In?

Bringing farm-to-table back to the farm 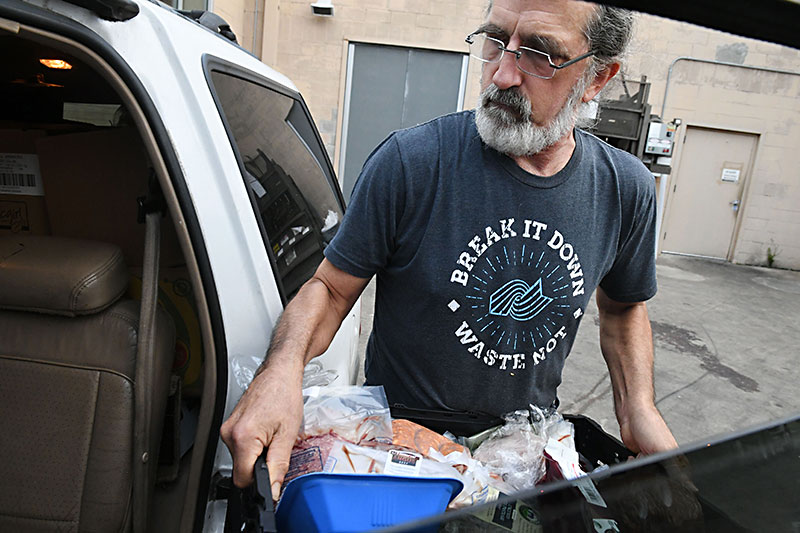 It's Saturday morning and Allen Schroeder is fitting boxes of produce into his packed Ford Explorer with the finesse of a veteran Tetris player. Several bright yellow bunches of bananas crown a parcel loaded with shiny apples; cartons of berries commingle with sweet potatoes, asparagus, and bunches of herbs. Schroeder isn't preparing for the farmers' market, but rather his weekly delivery to Casa Marianella, an East Austin shelter housing 50 recent immigrants and asylum seekers.

“We’re pretty much a bottomless pit of need for produce. That box of apples will be gone in a day, which is wonderful because everyone who comes here is malnourished.” – Jennifer Long, director of Casa Marianella

According to Austin's Office of Sustainability, 17% of Austin's population is considered food-insecure. "We depend on a lot of donations, particularly fruit and vegetables," says Jennifer Long, Casa Marianella's director for the past 19 years. "We're pretty much a bottomless pit of need for produce. That box of apples will be gone in a day, which is wonderful because everyone who comes here is malnourished. A big box of apples is like nirvana."

After visiting Wheatsville Co-op and Fresh Plus to rescue things like imperfect produce, day-old bread, and dairy – 3,000 pounds of food that would otherwise be composted – Schroeder, the food donation specialist for Break It Down, distributes the goods to neighborhood centers and churches.

Larger nonprofit organizations have the bandwidth and infrastructure to bring in much larger quantities. Keep Austin Fed saves over 55,000 pounds of food each month, and of the 38 million pounds of food Central Texas Food Bank distributed in the 2015-16 fiscal year, 19 million pounds were rescued from restaurants, retailers, distributors, and farms. H-E-B donated 5 million pounds of food to the CTFB last year through their Perishable Rescue Program. This summer, Whole Foods Market's South­west Region joined the Food Donation Con­nection, which facilitates donations between food businesses and local nonprofit organizations. Austin City Limits Festival donates all its leftover food to CTFB, and the Uni­ver­sity of Texas stadium just began recovering game day leftovers for food bank pickup.

Still, not all businesses are so quick to jump on board with food rescue. Some refuse to donate because of hygienic concerns, despite the fact that all food donors are protected by a Good Samaritan Act. "More than anything, we try to further educate people in the food world about the fact that it is legal and protected to donate unsold food," says Tyler Markham, CTFB's agency retail specialist.

Schroeder has heard some companies say that donating excess would cheapen their brand, and others are waiting for external leadership to enforce procedures. "Some just don't want to deal with the logistics – a relatively small change in the population of the business," he says. "They would rather throw it in the dumpster than create a system for diversion."

Schroeder, who has over 24 years of grocery experience, delved into food recovery while working for Wheatsville in 2008. Around the same time, he joined the Austin-Travis County Food Policy Board's food recovery working group – a think tank that researched and presented the city's need for food rescue while Austin Resource Recov­ery worked on a waste diversion plan.

In 2011, the Resource Recovery Master Plan was launched with the goal of reducing the amount of trash sent to landfills by 90% and achieving zero waste by 2040. Since 85% of the city's trash and recycling comes from businesses – which all use private haulers – the Universal Recycling Ordin­ance was the first order of business, phased in over five years' time, beginning with the largest commercial and multifamily residential properties. As of Oct. 1, 2017, all businesses must provide recycling and submit an annual report, according to the ordinance.

“The current Organ­ics Diversion Plan is just a composting ordinance. There’s no sense of urgency to get food to people. We need to change this ordinance because it’s not saving food.” – Allen Schoeder

Phase two of the master plan deals exclusively with organic materials, which take up 37% of our city's costly landfills. In addition to launching a citywide curbside composting collection this month, each Austin food service establishment 5,000 square feet or larger is now required to submit an Organics Diversion Plan aimed at keeping organic materials out of landfills. By October 2018, food service establishments of all sizes will be required to do the same. In this new plan, each business is required to adopt at least two different methods of diversion and prove how they implemented practices. Options include composting, waste reduction, removal of single-use materials (disposables), food waste prevention, food donation, and ongoing food recovery.

Austin Resource Recovery maintains that there are too many unique types of food businesses in Austin to enforce any stricter mandates on food diversion. "Take JuiceLand, for example," says Susanne Harm, ARR's public information specialist. "Their organic waste is usually squished-up oranges and fruit pulp. So their specific business would be perfect for donating to farmers, but not necessarily to people for consumption."

For now, ARR is focusing on educating businesses on waste reduction and organics diversion, and is willing to work one-on-one with them to achieve these goals. Plenty of Austin food businesses have already taken steps on their own to function as close to zero waste as possible, and ARR believes these models – and the customers who support them – will continue to push industry standards. "The customers here in Austin really do hold businesses to a higher standard," says Harm. "They want businesses to be environmentally friendly."

Austin's food policy manager, Edwin Marty, has been focusing on food recovery since joining the Office of Sustainability in 2014. "We, as a city, are in the midst of developing a broad strategy for how to eliminate food waste from our system and how to put food recovery in at a higher level of prioritization than it currently is," he says.

“America has food waste as the result of a really broken food system [where] it’s easier to throw it away than it is to refine the system of recovering it.” – Edwin Marty, Austin Office of Sustainability

The Environmental Protection Agency, which reports that Americans produce 4.40 pounds of trash per day, has created an inverted pyramid to describe guidelines for food protection. From the top down, it's source reduction, feeding hungry people and then animals, using excess food for industrial purposes (like fuel), composting waste, and using landfills as a last resort. "America has food waste as the result of a really broken food system [where] it's easier to throw it away than it is to refine the system of recovering it," says Marty. "We are hoping to do some significant research in the next year about the cost benefits of different strategies."

He points out the cyclical conundrum at hand: Innovation and infrastructure require money, which would create tax increases impacting the very same population who is currently food-insecure. "We are aware that the people we'd like to get recovered food to are the ones who are suffering most from the lack of affordability of our city," Marty says. "So there's a really complex philosophical perspective. Does it make sense to increase the cost of living in Austin because we're trying to get recovered food to hungry people?"

Schroeder contends that the most compassionate route is also the most financially viable. "A measure of food might be worth $100," he says. "But as fuel, it's worth maybe $40. As compost, it's worth $3. How do we maintain the value of food in this process? Keep it as food if at all possible."

Since the first phase of the Organics Diversion Plan rolled out two weeks ago, there's been a heightened public interest in both composting and food recovery services. Like Food Donation Connection, Break It Down is shifting to a for-profit model, and they just entered into a contract with a software company that will enable them to calculate businesses' tax deductions for food donations. "More food is being moved to the needy – that's number one," says Schroeder. "We're getting more companies to donate food, and they get a tax write-off, so that's a win for them. Since there is money to be had, it adds another win to the win-win." Food recovery apps like Unsung, Food Cow­boy, and Spoiler Alert aim to both solve and monetize this high need. "It's a really exciting time to be involved with the food recovery initiative because of the amount of innovation happening right now," says Marty.

"This idea isn't competing with other folks in town already doing good work, but instead it's complementary," Allen says. GrubTubs takes scraps most composting companies don't want (meat trimmings, eggs, fish guts, dairy) and leaves the type of fibrous browns needed for good quality composting. After winning the top WeWork Creator Award this summer, the team is testing the initial concept with restaurants like Otoko, Barley Swine, Eden East, and Le Politique. They hope to add food rescue to their model by offering one tub for grubs and one tub for edible food donations.

"This idea helps bring the farm-to-table idea table-to-farm in a circular system where everybody benefits because we're no longer wasting valuable food nutrients," says Allen. "And if our logistics solutions can increase the volume of perfectly edible food to organizations like Keep Austin Fed or Central Texas Food Bank, that's even more value we bring back to the community."

A version of this article appeared in print on October 13, 2017 with the headline: Rescue Remedy