Zucchini Kill Serves Up Riot Grrrl Cupcakes to the People 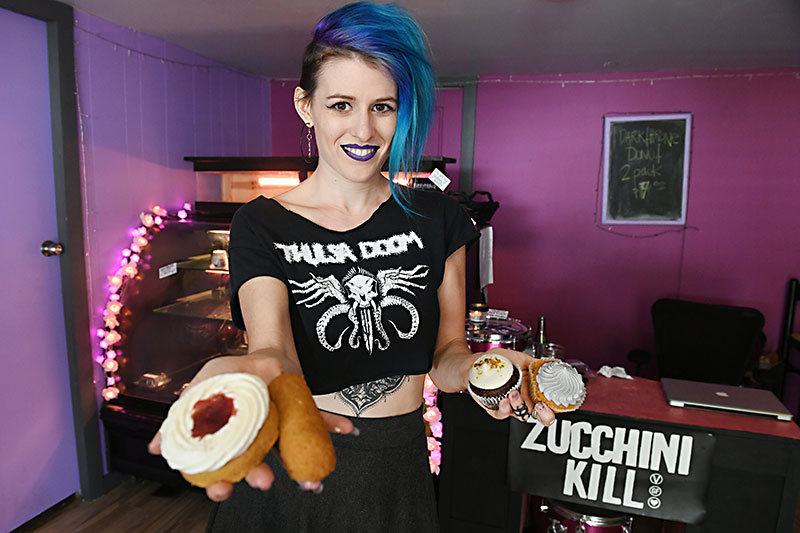 Vegans cannot live by (gluten-free) bread alone. Sweet treats are also essential to their well-being, and that's exactly the concept Zucchini Kill is counting on. Austin's only dedicated vegan and gluten-free bakeshop offers other allergy-friendly options – including soy-free, coconut-free, and maple-sweetened – so it's no surprise they sold out before end of business at least once even before their Sept. 16 grand opening. These vegan bakers have been satisfying dietary restriction-friendly sweet tooth cravings for a while, but based on customer feedback during the first few weeks as a proper brick-and-mortar, they're bringing their dessert game to a whole new level.

Cece Loessin, the brains behind the baked goods, concocted the idea of Zucchini Kill (an ode to feminist icon Kathleen Hanna's punk band Bikini Kill), and secured herself space in a commercial kitchen back in 2016. She knew she couldn't do it alone. Fortuitously, Loessin was the guitarist in all-female punk band Bondage with drummer Jessica Freda, the former co-owner of Red Rabbit Cooperative Bakery. When Loessin approached Freda about the venture, Freda gave an enthusiastic, "Heck yeah!"

Together they sold vegan, gluten-free Twinkies and cupcakes at markets, at food trucks like Arlo's, and restaurants like the Buzz Mill and Counter Culture (they plan to continue stocking the cherished lunchtime cupcakes), surprising visitors with new flavors and concoctions each day. They'd whip up everything in their celiac-friendly kitchen south of town, package it, and take it out to satisfy the masses. Soon, two brilliant bakers weren't enough to fulfill the demand, and Freda introduced Loessin to MT Gibbs, a vegan cupcake baker for Skull & Cakebones. Suddenly a relatively new company had a combined 20 years of vegan baking experience under its belt, and it seemed like the perfect time to take things up a notch.

When a storefront space opened on 53rd Street in Possum Park – a little vegan oasis populated with food trucks like Bistro Vonish, the Great Y'all, and veg-friendly Bananarchy – they pounced and got their spot. "It's always been our goal to have a retail shop," says Freda, who, admittedly, did not enjoy selling cupcakes at outdoor markets on sweltering Austin afternoons in the summer. "We couldn't say no to the opportunity. It was too perfect. So we hunkered down and made it work. It's been a crazy two months. We couldn't have asked for a better spot." The ambience is expectedly cool with band posters, cozy colors, string lights, and punk rock streaming from the radio. "It's a rad shop," adds Freda.