Staying Healthy to Stay in School 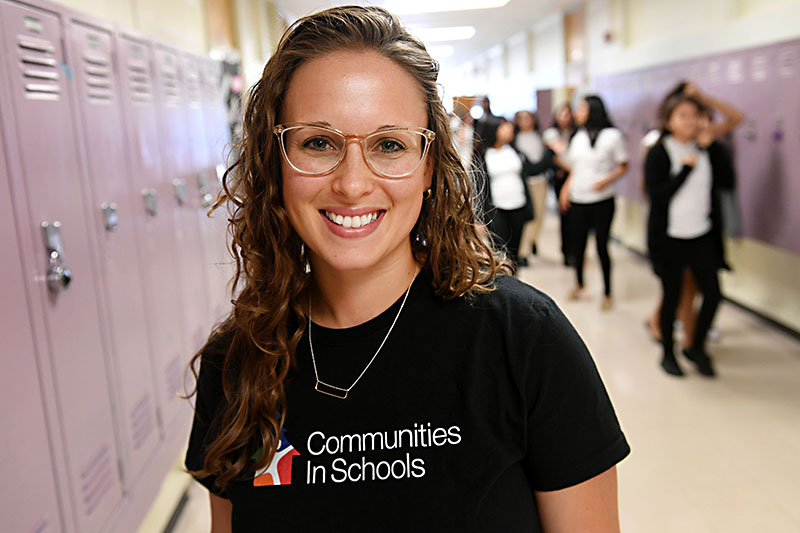 The passing period between classes at Bertha Sadler Means Young Women's Lead­er­ship Academy is eerily calm on a Friday afternoon in August. No one jostles or hollers as they traverse the hallways to their next destination; rather, the transition is orderly and downright peaceful. Some of that peacefulness, perhaps, comes from the fact that there are no ringing bells to mark the beginning and end of the passing period. Instead, small television screens in the classrooms indicate the time and class period – silent, gentle ways of reminding the students where they need to be and when.

Sadler Means, located in Northeast Aus­tin between the Windsor Park and Univer­sity Hills neighborhoods, enrolls about 400 girls in grades six through eight. It's not a particularly diverse school, ethnically or economically: About three-quarters of the students are Hispanic, around 20% are African-American, and the remaining 5% includes white, Asian, Native, and mixed-ethnicity girls; 90% of the students are economically disadvantaged, which presents huge barriers to success in school (not to mention life itself). It's an ideal place for a national nonprofit dropout prevention program to set up shop.

Communities in Schools serves 1.5 million students in 25 states across America, and more than 50,000 clients in six area school districts, including Austin, Manor, and Del Valle. CIS provides clients with health and wellness programming both on school campuses and in public housing developments, with an eye on keeping kids in school and setting them up for future success. About 18% of local kids live in poverty, with one-quarter of Austin's Hispanic and African-American youth living below the poverty line.

“Being a part of a community in Austin means that you have to look outside your four walls.” – Kevin Fink, Emmer & Rye

With poverty comes food insecurity – a considerable obstacle to successful school performance: Hungry kids are less able to focus in class, and have short attention spans and discipline issues. What's more, kids are growing bodies and brains and need lots of calories in the form of healthy food – protein, veggies, and fresh fruit – for optimal social, mental, and physical development. Addressing hunger is one entry point for Communities in Schools as they work to remove the barriers that at-risk students encounter en route to completing their education.

The CIS offices in Sadler Means are unassuming but welcoming. An aromatherapy machine adds to the calming ethos of the cool purple walls, comfy couches, and low incandescent lighting (no institutional fluorescent lighting here!). It's here that Allison Quinones, CIS program manager at the girls' school, implements the mentoring, tutoring, and life skills training to roughly a quarter of the attending young women. Another CIS program, SmartKids, partners with Meals on Wheels to provide afterschool meals to kids living in public housing, along with teaching nutrition, basic cooking skills, and yoga lessons.

"We definitely want to serve the whole child," says Quinones. "If their basic needs aren't being met, that's a roadblock. In our intake we always ask, 'Do you guys have enough food at home? Do you have food on the weekend?' We refer families to nearby food pantries, and have sometimes gone to the food bank and delivered food to the family if transportation is an issue." The Central Texas Food Bank provides monthly snack packs to augment students' diets at home. "There are many times when a student has been homeless and they don't know whether they're going to be eating," says Quinones. "So we stuff a bunch of snacks into the backpack and send it home with them."

The objective of CIS isn't just to fill empty tummies in the short term. They also aim to build an off-ramp out of poverty through a well-rounded education – a move that leads to increased economic prospects and improved physical and mental health outcomes for at-risk students. "Some of the ways we use health and wellness as a way to improve mental health and focus is by getting active," says Quinones. "We will walk the track while we talk; sprint if they're low energy; toss a ball or throw a ball at the wall if we're really angry. We also incorporate healthy eating and as much as we can teach them [about] how to cook something."

Quinones adds, "Some students want to eat healthier because they notice that it's not an option at home, or they want to have the knowledge on how to do that. One time I made smoothies for the girls – it was a chocolate-banana-peanut butter smoothie. I brought in fresh spinach [for the smoothies], and we all went around and tried a spinach leaf and talked about how spinach is good for you. They loved it. They were so amazed that they couldn't taste the spinach in the smoothie. That's really exciting for me – to see them get excited about nutrition and actually learning why things are good for them. Just small pieces of education like that can go a long way."

The work depends on underwriters to provide these meaningful interventions in an at-risk child's life. CIS is supported by the nonprofit's 22nd annual Food for Thought event taking place at the Moody Theater this Wednesday, Sept. 26. For $250, attendees can enjoy tasting portions from high-profile Austin chefs and restaurants – including Siena Ristorante Toscana, Emmer & Rye, Sway, and Sala & Betty – against a backdrop of live music by the Hot Texas Swing Band.

While local restaurants often participate in charity events, this one seems to have particular resonance for the invited chefs, who, when asked, stress the importance of bolstering Austin's most vulnerable young people. "I love being a part of Food for Thought because it benefits Communities in Schools and the important work they do to support students and help them graduate from high school," says chef Harvey Harris of Siena Ristorante Toscana. Harris will be serving cold-smoked sea scallops, salted watermelon, key lime mignonette, and Marcona almonds.

"Being a part of a community in Austin means that you have to look outside your four walls," says Kevin Fink of American dim sum-style restaurant Emmer & Rye. "Restaurants serve many purposes in a community. They were always originally a meeting place for ideas and thoughts and comfort. Restaurants, small family-owned businesses, are able to move forward movements that better their communities." Fink will prepare agnolotti in a broth of fermented chile and pepper brine with olive oil and fresh herbs.

In addition to the tasting and mingling, Food for Thought also features a high-dollar auction of five luxury packages, which usually fetch between $4,000 and $10,000. One Austin-centric package includes VIP three-day passes to the Austin City Limits Music Festival, tickets to a UT basketball game, dinner for four at New Waterloo's soon-to-open Downtown French bistro Le Politique, and passes to Willie Nelson's exclusive Luck Reunion. Another package includes a private Caribbean cruise on a chartered 100-foot schooner. For those who want to support CIS programming but aren't able to splash out on $10,000 luxury vacation packages, there are many ways to volunteer: organizing holiday gift card drives, serving as a reading buddy, and assembling hygiene kits for students.

"Serving our community and being focused on causes that we believe in is deeply important to the restaurant team," says Chris Dufau, general manager of Le Politique, which will serve handsome chefs pâté en croûte at the event. "This is a very simple way that we, as restaurateurs, can impact young Central Texans' lives. Providing paths and resources for young people to learn how to eat nutritiously and increase food knowledge is a privilege and opportunity for all of the Austin restaurant community. Anything that we can do to further this dialogue is an honor."

A version of this article appeared in print on September 22, 2017 with the headline: Chew on This