The underground dinner scene isn't for everyone. Putting complete faith in a guest chef's unpublished menu, or clicking "purchase" on a $100 ticket without knowing the dining details, can be daunting for some. But the opportunity to connect with complete strangers over a shared love of food, during a one-of-a-kind experience in a clandestine location, can also be the spark that keeps relationships with Austin restaurants aflame.

The idea had been sitting with local chef Alan Delgado for years. Tumahye (too-mah-YEH), a word Delgado made up as a child, loosely resembles the Spanish term for "suit and tie," and reminds him of his family's move from Ciudad Juárez to El Paso for a better life. While he credits his broad cooking experience to time spent in many different kitchens (including Clark's, Launderette, and currently Patika, where he operates the food trailer), working for businesses that focused on the numbers stifled his and his colleagues' creativity. "I wanted to create a space where we weren't really worried about whether the guests would like it or not," he laughs. "It's about us having fun. And when the chefs have fun, you're going to get a better product in the end."

Launched in February of this year, Tumahye's monthly dinners offer 8-12 courses from Delgado and rotating guest chefs. Past dinners have featured Juniper chef de cuisine Amanda Turner, Barley Swine pastry chef Sarah Prieto, and former DunlapATX exec chef Carson Symmonds, to name a few. Delgado invites chefs from varied cooking backgrounds to participate in his supper club, sometimes before they've even met, but the menu development happens organically. Del­­gado explains, "We meet and just start throwing ideas out like, 'What about hoja santa, freeze-dried and turned into a powder?'" Ideas that reach group consensus are written down for further development. 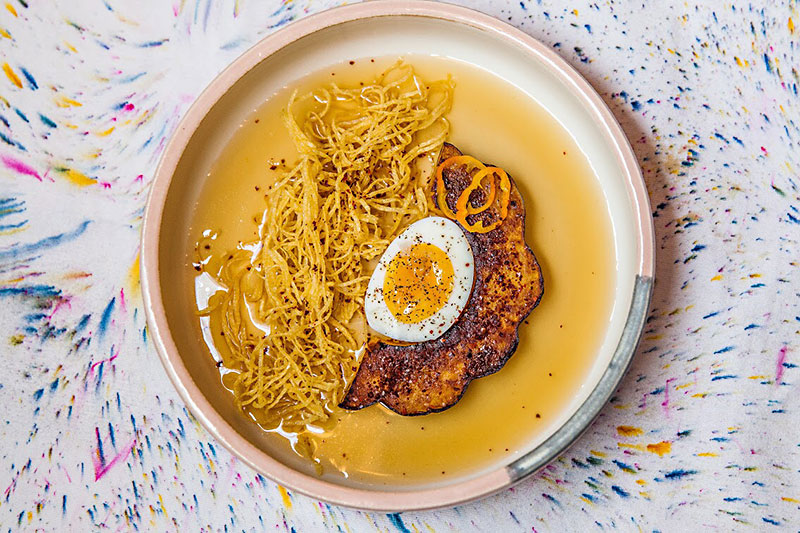 Tumahye (Photo by Collete Presley)
“It’s about us having fun. And when the chefs have fun, you’re going to get a better product in the end.” – Alan Delgado

Currently taking place after-hours in the minimalist Patika space, Tumahye's dinners are capped at 25 guests to maintain their intimacy. It's important to the team that diners are able to truly interact with everyone who has a hand in pulling off these special events – not just with the chefs, but the dining room server or event photographer. The dinnerware is custom-made for Tumahye by local ceramicist Evan Horn of Texagons, and napkins are handmade by local textile artist Mercedez Rex, making each spread a truly unique display.

"When you go to Wu Chow, when you go to Launderette, you know what food you can expect," says Delgado. "Does that mean that's the only kind of food that chef can make?" he asks. "We're not making food for the guests specifically. We're making food that makes us happy." September's dinner collaborates with Christopher Goodson, chef de cuisine at Contigo, and the only constraint so far is that the primary protein will be chicken. "It's such a simple animal, but it's also a blank canvas," Delgado muses. He promises that the whole chicken will be used, from the brains to the feet.

Tickets for the chicken dinner ($65) on Tuesday, Sept. 26, are available at www.tumahye.com.

Where the chef-driven Tumahye prioritizes creativity, Foster ATX values community above all. Founders Shelby Goodwin, Stephanie Gutierrez, and Sara Barge spent five weeks backpacking in Europe, and Goodwin claims that the seeds for Foster were sown during that trip. Upon their return, Goodwin admitted that they were all unhappy at their entry-level marketing jobs. Still inspired by their overseas trip, Gutierrez asked, "What if we can bring people together through music and food?"

Foster's first food event was in late July 2016, but intimate house concerts (easier to coordinate) dominated their calendar. By 2017, the popularity of the roving restaurant was undeniable. "We saw how adventuresome everyone is to try new experiences around food." Goodwin says last month's event, Un Paseo por la Milpa, was "a beast." The two-night event featured notable chefs Gabe Erales and Pablo Soto, both former alums of Noma Copenhagen and the Noma Mexico test kitchen in Tulum. The 80 allotted seats sold out in a few hours, and a second night was added.

It's been a steep learning curve for the founders, all marketing majors. "The first night was rocky," Goodwin says. The only founder with service industry experience, she also waits tables part time and recognizes the challenge of pop-up food service in a nonrestaurant setting. July's 15-course sushi dinner (helmed by former Uchiko head sushi chef Yoni Lang) manifested inside the beautiful (and narrow) Noah Marion Quality Goods.

But inside that cozy space, something special happened over the five-hour meal. The organizers set place cards askew so that plus-ones were sitting diagonally from one another, a social experiment that allowed guests to physically open up to the other attendees. Texas Saké Company provided pairings for each course, and by the end of the night, every guest was hugging goodbye, swapping phone numbers, and making future plans. The next speakeasy meets for brunch ($75), on Saturday, Sept. 23, for a five-course seasonal menu including complimentary sparkling cocktails, coffee, and Bloody Marys. Visit www.fosteratx.com.

Austin's creative community thrives on intentional collaboration. The Elephant Table offers an opportunity for industry folks to connect and network around the dinner table. Unlike most other supper clubs, foodies aren't the target market. "There are a lot [of supper clubs] that focus on doing a food-and-bev evening. It's definitely intimate; it's definitely special," explains co-founder Beth DiBaggio. "But we have such a focus on the why," adds co-founder Hope Furst. "We want to create this really empowering platform for people to showcase what they do." Case in point: The most recent Elephant Table – "Volume 4" – took place inside local photographer Paige Newton's studio. The location is always the first part of the equation and "sets the vibe," as Furst puts it. From there, a chef (or chefs) and a designer are selected. Newton suggested husband-and-wife catering duo Matti Bills and Geo Ellis of Mum Foods to work the kitchen. Illustrator Emma Gundlach hand-painted each menu, including a map of where in Texas the chefs foraged ingredients for the six-course dinner. The entire event was documented by photographer Chelsea Francis, but the handpicked participants don't end there.

Even the guest list, to an extent, is curated. While the "collaborative dinner parties" are open to the general public, wannabe guests receive an email notification and have 24 hours to RSVP before the remaining tickets are offered. "The underground dinners aren't a moneymaker," says Furst. "But we've set it up so we can turn it into a concept where we're throwing parties for different brands and telling their story through a dinner." Last month, the Elephant Table organized the launch for Bumble's new Austin headquarters by wrangling chefs, wineries, breweries, distilleries, florists, balloon artists, and others. Corporate events were the ultimate vision of how the Elephant Table would actually make money, and these days requests are coming in through word-of-mouth alone. "We can pull from the partners who have done our pop-ups to [help out] with bigger brands' events as well," says DiBaggio. "It's really cool that it can come full circle like that."

To join the Elephant Table’s mailing list, and get the chance to snag one of 18 seats at the next dinner this fall, visit www.theelephanttablecollab.com.

A version of this article appeared in print on September 15, 2017 with the headline: Club Kids