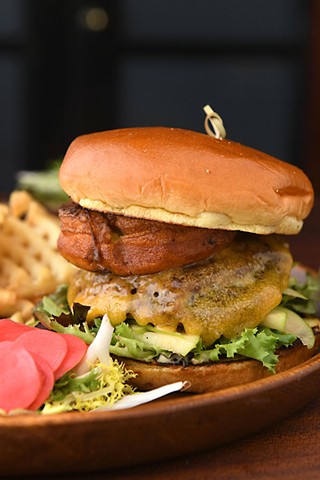 I knew Native Hostel wasn't exactly my kind of place when I was confronted with a wall of Bonobos short-sleeved shirts and floppy felt hats. This was a place to Boomerang the clinking of decorated coupes, framing the shot just enough to subtly capture the top of the feather tattoo got after last summer's bad breakup – not necessarily the domain of aging ex-hipsters who aren't looking at, say, rust-colored velvet with a fresh set of eyes. 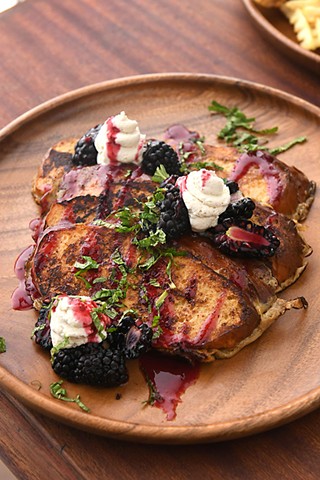 It's not that I begrudge partners Michael Dickson (Winflo Osteria, Eberly, Kung Fu Saloon), Antonio Madrid (Icon Design), and Will Steakley (Mohawk) the focus on the youth. Hostels have been catering to that demographic for the century of their existence. And I can't fault them for their focus on the look either, especially with such a talented designer as Joel Mozersky at the helm. Here, he rediscovers the trappings – macramé, kilim pillows, and heavy carved wood – of Gunne Sax languor of the "Me" Decade with barely a whiff of nag champa. It's a fashionable space, perfect for showing off your vintage Ferragamos. 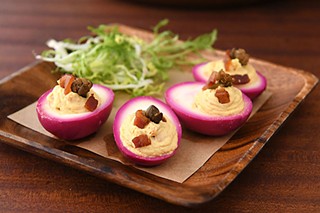 But as happens with so many see-and-be-seen places that cater to young Austin, Native Hostel's bar and kitchen often forgets that it must first operate as a bar and kitchen. On a rainy day brunch visit, my party wandered from the coffee shop to the main dining room lost, admittedly missing the seat yourself time. A conscientious staff might have noticed confused customers – my bad, I was wearing track pants – and directed them to a table, but perhaps arm-crossing is an important part of their side work. The counter server was untrained, which wouldn't have been a problem, except for the panic that our order seemed to instill. Austin tends to equate bad service with rudeness, which is one of the reasons our city's hospitality standards remain low. Make no mistake, I didn't run into a single unfriendly member of the front-of-house staff on either visit. But during brunch, I did encounter a staff that didn't seem to be concerned with the details of hospitality. Cocktail glasses arrived with fingertip smudges, plates were whisked away without even a perfunctory acknowledgment of the table, and a leaky roof was allowed to splash off a copper table onto the guests. And while the kitchen staff were furiously turning over tickets, two servers were having a coffee klatch near some cardboard boxes stacked on the floor (a detail Mozersky surely didn't intend for the space unless he is entering a postmodern period). That nonchalance made me less forgiving of the food. Brunch is new, so I trust it will tighten up, especially those dishes that have not carried over from breakfast. Hopefully, that will be soon.

We were disappointed in the Scotch egg – purported to be soft-boiled, but more resembling a Japanese onsen tamago. The house sausage was flavorful enough – indeed it was a highlight of the All American TKO breakfast – but it wasn't enough to correct the texture.

The sweet potato latke was an altogether sad affair, festooned by two strips of fatty bacon, a ring of grilled pineapple, and a floppy poached egg. The pancake itself spread over the plate like a clump of sod, fibrous and burnt on the bottom. The cardamom French toast had a bit of char too, less noticeable with the subtle bit of spice and the heavy drizzle of blackberry syrup. There wasn't much jolt in the coffee Chantilly cream, but perhaps that was for the best.

But the kitchen was able to execute a good scrambled egg, done with a large curd. And smudged glasses aside, the drinks were agreeable, especially the briny rosemary gibson and the surprisingly light Gem & Bolt mezcal-based Bolt & Sand. The Bloody Mary was perfectly serviceable but featured a lime that might have died of shock. Again with those details.

The lunch and dinner service was far superior, when the kitchen serves the sort of slightly tweaked American bar food that would have been at home at chef Virginia Pharr's previous project, Lady Luck. Both of the burgers are solid, but the Tavern burger edges out the Flat Top with a fist of pimento cheese and a dense Moravian Lovefeast bun (a necessary stopgap for the grease). That bun also plays a pivotal role in the fried chicken sandwich – a better version of Chick-fil-A's trademark, given extra kick from pickled pepper rings. Both are served with a side of waffle fries and an exemplary dill ranch – a holdover from Lady Luck.

A handful of the dinner dishes weren't quite up to form. The beet-pickled deviled eggs stunned on the plate, but needed a more liberal use of horseradish to earn their name. And the duck confit salad was marred by wilted Bibb lettuce, a shame because the other ingredients used – fried pancetta, fontina, and brown butter sage croutons – gave nuance to the fatty duck. In some ways, it's a spiritual successor to Lady Luck's Stoner's Delight, a maximalist tumble made for absorbing that fourth beer.

But the devil is in the details. Maybe it will never be fashionable to try too hard, but Native Hostel is a lesson in the difference between making things seem effortless and not putting in any effort at all. Native may have a gift shop, but cool alone doesn't keep a restaurant in business. And its promise deserves to be met with more than a shrug.