Hot-weather food with a sunny disposition 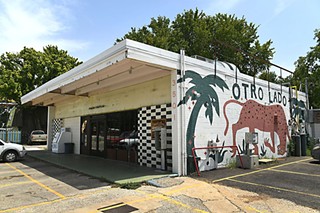 At least for those of us who spend more time engaging with Instagram than we do with reality, it seems inevitable that Austin would get a bar named Kinda Tropical. Every other shot is backdropped by Blanche Devereaux fronds, every Wayfarer-wearing bro has a few scattered bananas on their shirt, and every respectable cocktail bar has at least one tiki drink on the menu. Austin is a city of vacationers; it makes sense. But that doesn't mean throwing a couple of copper Absolut Elyx pineapples behind the bar will do the trick. The past few years have seen two major concepts – Pleasant Storage Room and Isla – fail. Austin may be a theme park for the rich, but it seems we only have so much patience for themed attractions. So Kinda Tropical owner Amy Mullins (also co-owner of Yellow Jacket Social Club) does well by sticking closer to the "kinda" part, referencing island life with the odd mural or typography instead of stapling raffia to every countertop. 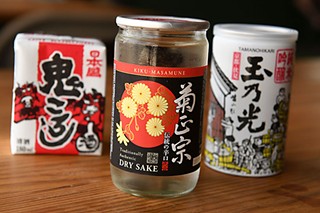 The restraint with the decor – perhaps an odd characterization for a place that has a diorama featuring a flocked deer, plastic grapes, and a hat-wearing cobra – yields some charm. Painted in the teals and bismuth pinks of a Cuban bodega, the bar area wallows in Y Tu Mamá También beachside languor. But one does get the sense that it is still a work in progress. Since opening, a few tables were added to the shop portion of the space, which tszujes up an otherwise spare area. 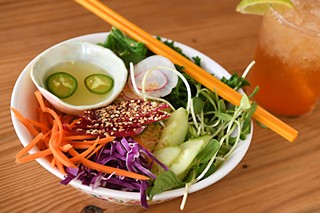 Unfortunately, most of the chairs both inside and out are the metal folding kind found in church basement AA meetings. And a slightly more literal approach to the tropical theme would have been welcome in the patio area. No need to go full Henri Rousseau here, but the odd palm would be nice. The food, however, relishes in the power of suggestion – loosely unified by the idea of eternal summer. There are a few pan-tropical (God, please let that never become a thing) elements on the menu, but mostly it just offers food that goes well with hot weather, whatever the origin. For breakfast, that means a lot of Californian influences. Millennials can fritter away their future mortgage money on avocado toast, of course – here given a bit more nuttiness from a sprinkle of sesame salt. The kimchi breakfast sandwich unexpectedly uses thick slices of Texas Toast, as does the radish toast (although in retrospect butter and radishes isn't altogether a surprise). And of course there is a Buddha bowl with rice, kale, shredded vegetables, and herbs – and a sprightly lemon vinaigrette we wanted three times more of. The dinner and lunch menu is small with daily specials filling in the gaps. The refried bean tostada, with a tumble of avocado, cabbage, and cotija, made for a good starter paired with a Shandy Pilz made with Topo Chico grapefruit (Kinda Tropical only has beer and wine cocktails). The jerk chicken was a highlight too, juicy and covered in assertive but not overwhelming spice. The rice and beans served alongside could use a little more oomph (or a good squeeze of lime), but both had agreeable texture. Order it with the daily small salad. Ours was a simple cucumber dill, perfect for a balmy day.

And that's just where Kinda Tropical gets it right, where those Hemingway-obsessed faltered. The food and general vibe has always been right for our sweltering city, but most people go to the Tropics to relax. The cool kids never have to try that hard.

The concept: Easygoing bar/bodega/restaurant that doesn't take its tropical theme too seriously

What to eat: The Rainbow Rice Bowl, but order extra dressing

What to drink: A michelada – it's almost like being healthy

Best splurge: The jerk chicken, which isn't really a splurge, but it is the most expensive thing on the regular menu

Best time to go: Early brunch before the day gets sweltering

Expect to pay: $40 for two with drinks