Some restaurants seem like riddles. When it was announced almost three years ago that chef Todd Duplechan of Lenoir, Jeffrey's co-founder Jeffrey Weinberger, and former TRIO GM Jeff Haber were rolling back the stone of the beloved J.T. Youngblood's Fried Chicken chain, the concept seemed like a sure bet, even as Austin hospitality was starting to bloat. The brand still held a special place in the hearts of Texans of a certain generation, and young Austinites never seem to tire of having nostalgia for the imaginary past. I was shocked that on the first week of opening, our group immediately found a seat. 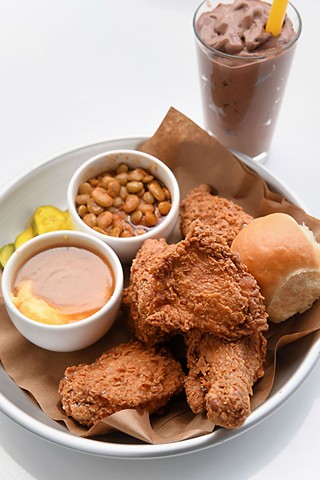 But a lot of things have happened since then, not the least of which was a mini-implosion of Austin's hospitality scene. The competition for the dollar is higher than ever, and there are scarcely enough people to fill the thousands of front- and back-of-the-house positions that are needed. Even the restaurateurs most committed to a living wage aren't able to pay enough to ensure their staff starts off with the experience necessary for a seamless operation. 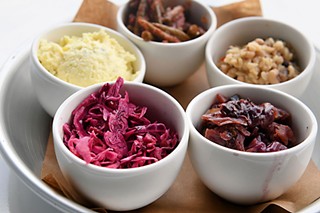 I suspect that that's what's going on at J.T. Youngblood's, an imperfect concept that has all the elements of success – affordability, family-friendliness in a growing affluent neighborhood. And it has fried chicken, which Austinites have lately brought back from the vault like some forgotten glam rock record. Good chicken at that – juicy whether cooked rotisserie over an oak fire or fried with a well-seasoned crust. But on five visits, I have never seen a crowd. That's certainly not the fault of the environment. The interior design team did a good job of referencing the past without looking like a set-piece, reproducing historical ephemera such as pop art and scattering the room with period detail (bent wood, aluminum table edges, tufted banquette backs) that doesn't read as dusty thanks to a wood plank skin. The use of cheery, primary colors (mimicking the tri-color palette of the original's matchbooks and takeout boxes) gives the interior a sense of timelessness, which is especially important for a restaurant trying to have cross-generational appeal. And the food should be crowd-pleasing even if it is clear that the line still has some things to figure out. This is a place that serves delicate yeast rolls with butter and honey, organic soft serve, and the greatest hits of Texas pie making – all things that tend to defy criticism. And the sides – the sort you would find at a meat and three, some with slight variations to tradition – are made with ingredients that should satisfy most helicopter parents (the inexpensive draft cocktails should calm their nerves).

Mashed potatoes, whipped with buttermilk and served with a velveteen gravy, are a gussied up version of fast food spuds. The vibrant potato salad is a revival from another bemoaned restaurant, Dallas' Solly's Barbecue, where Duplechan worked as a teenager. The white mac & cheese is a sophisticated take with a butter cracker crumb and a hint of rosemary, but a classic version with sharp cheddar might have served the populist tendencies of the restaurant better. Order the smoked butter beans instead, a sharp rejoinder to the notion that all Southern vegetables should be reduced to mush.

Unfortunately, consistency is an issue. I ordered the mac three times; the spirals were only cooked to the desired al dente once. On one visit, I had Cholula ready to spice up the previously bland Hoppin' John, only to find it unnecessary. The service is just as confusing. I've experienced counter service, full service, and a baffling combination of the two over my visits.

Normally, such missteps would discourage me from giving repeat business, but I keep going back for quick lunches. The difference is that Youngblood's seems quick to correct their errors, and to meet customer expectations where they have not. That shows a lack of ego that is far too rare in Austin's hospitality scene. For now that – and the damn good fried chicken – are enough.

The concept: The rebirth of a Waco-based fried chicken chain that used to dominate the state

What to eat: The two-piece with a side of smoky butter beans and a chess pie for dessert

Best splurge: The Tower of Power, 21 pieces of chicken that will create an instant picnic

Best time to go: 2-6pm, Tuesday-Friday for the happy hour featuring $4 cocktails and $5 snacks like fried bread and butter pickles

Expect to pay: $40 for two with two cocktails and shared pie