Locals warm up to cold-brew trend 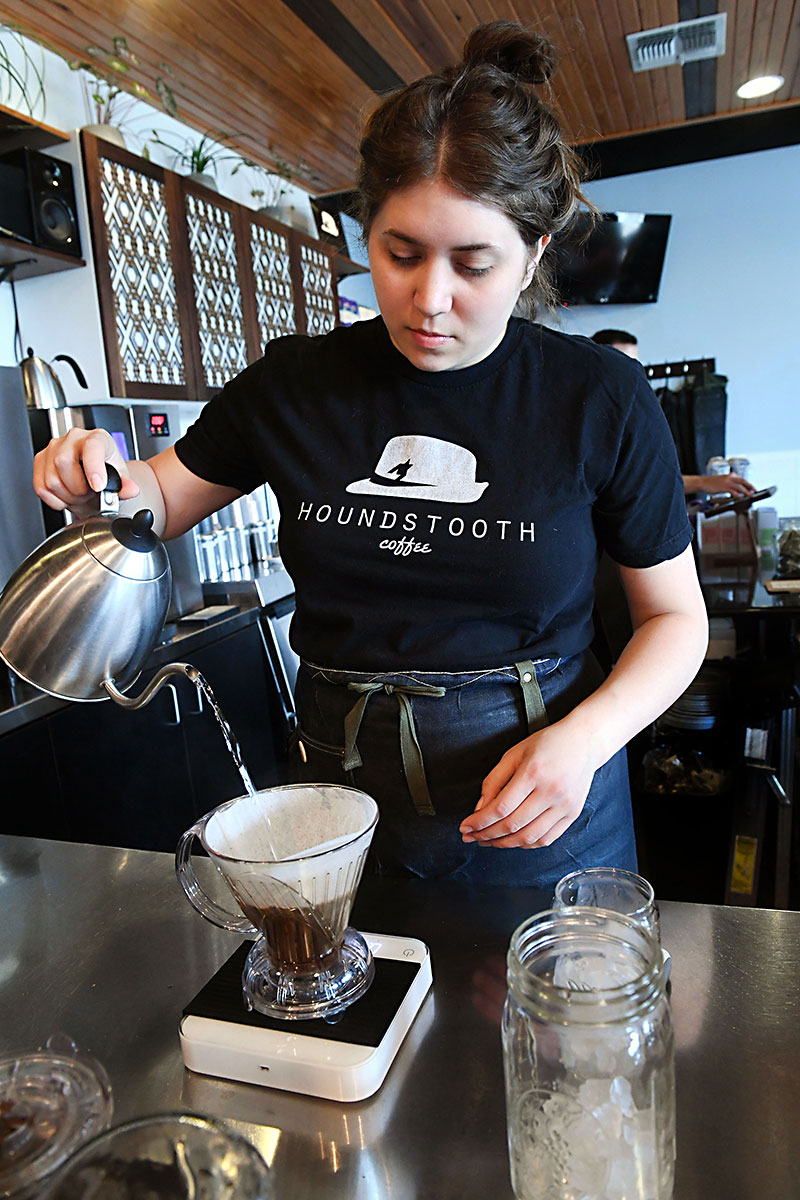 As soon as average coffee drinkers wrap their heads around a new style of drink, the coffee geeks of the world always seem to move on to something new. Austin's seen an explosion of cold brew in the past few years, and while most coffee shops in town now offer cold brew that takes as long to prepare as brisket, forward-thinking shops also offer a less familiar cold option: Japanese-style iced coffee.

So, what's the difference?

If cold brew is like smoking a brisket, Japanese-style iced coffee is similar to searing a steak.

Japanese-style iced coffee differs in that each cup is made to order. Baristas measure out the beans and put them into a pour-over brewing device like a Clever, Kalita Wave, or Chemex. Then they drip hot water onto the grounds, which trickles directly into a carafe full of ice.

If cold brew is like smoking a brisket, Japanese-style iced coffee is similar to searing a steak. Instead of a brew time that can exceed 10 hours, baristas accomplish the same goal in a matter of minutes. The result is a more acidic cup with lower caffeine and more tea-like consistency. Coffee nerds gravitate toward it because it's better suited to expressing the unique taste of each bean, bringing out fruitier and less conventional flavor profiles.

Houndstooth was one of the first to pioneer this style in Austin, dating back to the opening of their original North Lamar location in 2010. Even though they've been serving it for years, baristas still need to explain the process to many customers, who expect it to be related to Vietnamese coffee sweetened with condensed milk. Many still prefer cold brew, but the lighter and naturally sweet alternative has developed a following.

"We cater to a lot of businesspeople Downtown. If you want some caffeine in the afternoon, but you don't want a straight IV of cold brew, this tends to produce a less caffeinated cup," says Gregory Alford, head coffee coach at Houndstooth.

Granted, those looking for a grab-and-go option might not have time to wait for a personally brewed cup, but Alford sees many advantages to Japanese-style. For a cafe that already serves pour-overs, the extra time required to brew each cup to order isn't much of a wrench in workflow; brewing typically only takes three to four minutes, and watching the barista in action connects the customer to the product. Both methods use roughly the same bean-to-water ratio (1:16, after cold brew concentrate is cut), but steeping cold brew for so long creates a sponge effect where the grounds absorb a significant amount of water. Plus there's some silt that escapes the filtered bags, meaning more coffee is lost in straining. Overall, Japanese-style is actually more efficient.

Of course the staff at Houndstooth realize that plenty of drinkers might be skeptical of the process and hesitate to pay an extra dollar for Japanese-style ($4.80 for 16 oz.), but they believe the upcharge is worth it.

"I think all food industries are having the problem right now of trying to convince people that a premium version is worth a premium price. It's like, 7-Eleven has coffee. People say coffee is coffee, it all has the same name. So it can be hard to convince them that something is worthwhile or special," says Alford.

Another advantage of Japanese-style iced coffee over cold brew is that it's actually much simpler to make at home. Instead of buying specialized filter bags or gadgets, it's easy to adapt almost any home drip brewer. Use half the amount of water you normally would to brew, and fill the bottom of the pot with an equal amount of ice. The recipe accounts for dilution, so just brew the coffee as you normally would. This works best in a pour-over method like Chemex, but an old Mr. Coffee machine will accomplish the same goal. Basically you're just brewing hot coffee, but letting it drip directly onto ice.

"This stuff is not hard. It's mystified, but it's very accessible and doable," says Alford, who is about to publish a book on the science and methods of coffee extraction called Grounded.

The tea-like consistency and subtler flavors also make it an appropriate base for some of Houndstooth's signature drinks, ranging from a coffee version of an Arnold Palmer to a forthcoming coffee slushie reminiscent of a 7-Eleven Slurpee.

Despite the coffee nerd pedigree of Japanese-style, Houndstooth baristas don't turn up their noses at regular cold brew drinkers, but see this as another way for customers to explore different expressions of the coffee bean.

"There will always be cold brew drinkers. Brewing hot and brewing cold just extract very different flavors from the same coffee. One isn't better; this is just a great way of showing there's other options," says Alford.

Where To Get It

1111 Chicon, 512/953-1061
www.figure8coffeepurveyors.com
Everyone seems to know one another at this popular Eastside haunt. On a sunny day, go straight out the back door to check out the patio, a plant-lined strip cradling the building that feels like a secret garden.

2427 Webberville Rd., 512/524-0142
www.fleetcoffee.com
Owned by two industry veterans, Fleet is an essential stop for coffee obsessives. If you aren't in the mood for a Japanese-style iced coffee, try one of their coffee drinks with unexpected ingredients like infused milk and citrus.

2159 S. Lamar, 512/535-3955
www.patikacoffee.com
The former trailer is now a welcome brick-and-mortar respite from the hustle and bustle of South Lamar. It also happens to have one of our favorite brunches in town, with a menu that goes far beyond breakfast tacos.

1603 S. Congress, 512/872-3144
www.mananaaustin.com
We just feel cooler when we start our day at this cafe located in the chic South Congress Hotel. And diet or not, we never skip out on award-winning pastry chef Amanda Rockman's daily offerings.