Contemporary Tex-Mex does little to impress 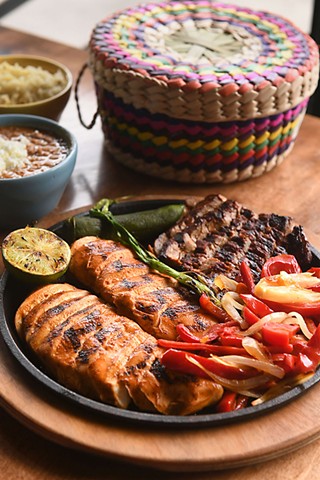 At this point in Austin's hospitality timeline, the most important question for restaurateurs is: Why? A few undiscovered concepts still wait in the wings, but in 2017 it's not really about filling in the gaps in cuisine. Nor with most corridors crowded, is it usually about filling in the neighborhood gaps. So why open a restaurant this particular year when so many places are struggling to fill seats and payrolls? 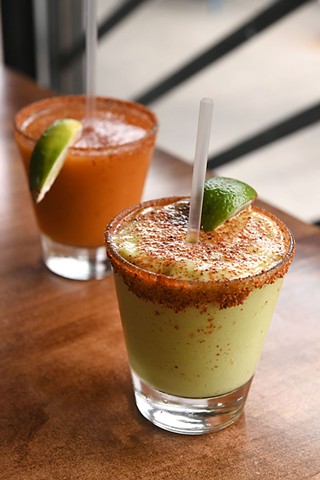 With chefs, market conditions rarely seem to matter. Passion can sometimes substitute for common sense, but the resulting restaurant doesn't usually suffer. But take a good chef's masochistic desire to serve the best regardless of consequence and replace it with cynicism and you might have a restaurant like El Burro.

Obviously, I don't know for a fact that the blood has drained out, but something has happened between Vincent Manguino opening VOX Table and El Burro. Where Joel Mozersky and Clayton & Little made a breathtakingly minimal interior for VOX, El Burro uses the reclaimed wood and tin signs of an overly pinned Pinterest board. Where VOX has chef Joe Anguiano confidently steering the course, El Burro is decidedly not chef-driven. Yes, it's like comparing apples to oranges, but the apple is a Honeycrisp and the orange is an overly pithy navel variety at the bottom of the pile. 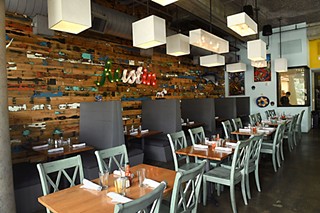 Something happened. My first visit was around SXSW for a quick stop. There were a few service hiccups, but the experience was pleasant enough overall. I won't go into too much detail here. Some of the dishes have since been removed from the menu and my notes from the evening were full of words like "OK" and "fine." I figured I would give the place a little time.

But time isn't what El Burro needed. On a recent Saturday visit, we arrived in the transition period between lunch and dinner, so we had to bide our time with dip and drinks until a batch of servers came in. VOX has always had a heavy focus on the bar program, and traces of that exist at El Burro, but there is far less of a focus on innovation. Instead, there's a paloma and a michelada and a whole lot of margaritas. We tried several: a frozen ($9), a rocks ($8), an avocado version ($13), and a Mexican martini ($10) served in a dainty coupe. All were easy with a balance of tart and sweet. Hey, it's not easy to fuck up a marg. 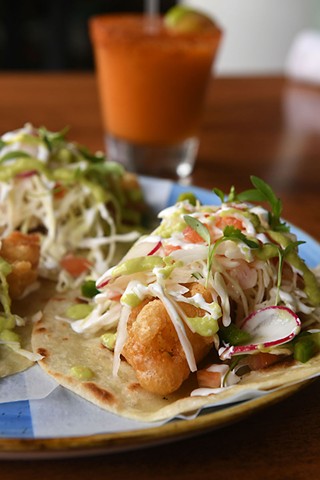 If only that were true of everything else. As a lifetime devotee of Velveeta and Rotel, I'm certainly no melted cheese purist. But the queso ($7) had the artificial tang and plastic texture of a Kraft single. The guacamole ($8) fared a little better, if only for its blandness. While I appreciate their concern for my blood pressure, avocado needs salt.

After the bartender abruptly closed our tab, we moved outside to the patio for a succession of dishes that ranged somewhere between Michelob Ultra and Kevin James on the scale of mediocrity. First to arrive were the calabazitas ($8) with charred squash and blistered tomatoes – more of a salad than the often saucy West Texan side dish. Unfortunately, most of the flavors were blunted by the refrigerator chill. I'm sure it would have been a modest success if it were allowed to return to room temperature. 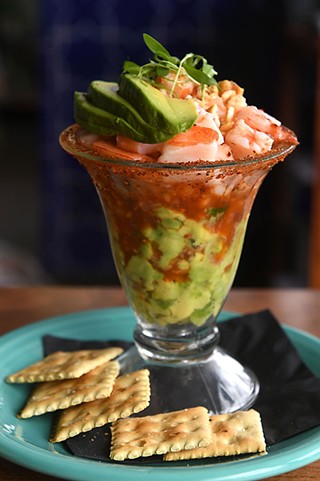 Nothing could have saved the queso fundido ($10.50 with the addition of mushrooms), however. Purulent clumps of cheese drowned in an eighth of an inch of oil, as if they poured the bacon – grease and all – straight from the frying pan. It should have never made it past the kitchen.

Thankfully, that was the low point of the visit, but El Burro never fully came back in the ninth. Next came the chewy "World's Best Taquitos" ($10), covered in crema, queso fresco, and limp shaved radishes, perhaps the local culinary scene's finest example of the Dunning-Kruger effect. The entrées shined in comparison, although by then our appetite was shot. I liked the carne asada in the El Burro Combo ($18) if not the enchilada and the embalmed bacon-wrapped shrimp. I only had a couple of bites of the steak torta milanesa ($14) but it was well-seasoned if otherwise unremarkable.

So the question that still lingers is: Why? Yes, the market is leaning toward contemporary Mexican and Tex-Mex, something Austin has always excelled at and embraced. Yes, that fact makes opening such a restaurant a safer bet than, say, embracing contemporary African. But everything about El Burro feels like a defeated shrug. In a town where some of our Tex-Mex institutions are failing, it seems particularly egregious to replace heritage with hologram.