A mixed concept with a dang good tot 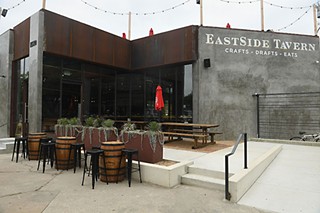 It was never something my parents allowed me to notice much, but there were periods of time where we must not have had much money. My mom made most of the meals, so my only experience with eating out was the occasional drive to visit some relative or other. More often than not, "eating out" meant Allsup's.

My jam was a fried burrito, served in a paper sleeve with a side of thin, vinegary hot sauce. I realize now that the burrito was frozen in some factory before being dropped in the gas station deep fryer, but I certainly did not lay any claims to culinary sophistication then. There was meat and heat and crunch and that was enough. My entire conception of Texas food was wrapped up in those moments.

I won't make an argument that real Texas food should come on a refrigerated truck, but there is something about our heavily spiced junk foods – the Frito pies served at Friday football games or the chopped beef-stuffed baked potatoes dished out at church fundraisers – that seems to get to the heart of the state more than the haute Southwestern served with a side of cowhide-upholstered banquettes. 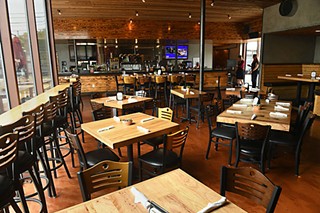 Sometimes you have to let something be what it is. I've seen a lot of confusion online behind the concept at Cesar Chavez's EastSide Tavern. Yes, it's part sports bar, part roadhouse, and part barbecue joint, but all of those things can be filed neatly under "Texas." It's not as if they placed a sushi bar in the center.

But I'll admit to some misgivings when I learned the concept was from Cardin Management, known previously for Warehouse District bars The Market and Hangar Lounge – both places I'd really only consider if I was planning to meet a possibly embarrassing Tinder date. But despite a concrete and sheet metal interior that seems like an incomplete buildout, the place has more going for it than I would have thought.

Most of the pleasures of EST's food can be found in the appetizer portion of the menu and its selection of gussified bar classics. Uniformly cut loaded fries ($11) are topped with a fistful of chopped pork, yellow cheddar, pickled onions, and drizzled sweet-tangy sauce. A well-distributed chopped green onion would have been preferable to the fussy scallion brushes, but far be it from me to tell a chef not to get that social media capital. Little touches made the difference in several dishes. Smoke lent depth to the chicken wings ($9) that was not entirely lost in the buffalo sauce. And salsa verde rescued the Frito pie ($10) from being too leaden. And pickling made the fried veggies ($10) and deviled eggs ($8) just different enough to warrant going down those same dusty roads.

Had they been thought of back then, the tots ($10) might have knocked those old fried burritos off my childhood perch. Stuffed with brisket and cheddar, they're everything you want to eat while chugging pilsners. I'll even forgive the side of chipotle aïoli (anyone can spoon some adobo into a jar of Hellman's) if only because they are good without any dipping sauce.

There are highlights to be found elsewhere on the menu. The blackened fish tacos ($15) aren't afraid of heat, and use the aforementioned aïoli sparingly. The EastSide Burger ($11) is solid, but the brisket patty melt, with sweet caramelized onions and mushrooms, will give you more bang for your buck. Playing bleu cheese against bacon bourbon jam might not inspire any glory hallelujahs for creativity, but the pulled rib sandwich ($14) at least knows a good thing when it sees it. The banana pudding ($8) should have used more of the advertised smoke, but it was an agreeable take on Austin's current trend dessert.

Unfortunately, the main event of the restaurant – the barbecue – was a much more mixed bag. We ordered the Top Dog ($20) and EastSider ($18) platters for a little bit of everything. While each meat was properly seasoned, it all suffered from dryness. You will be better off piling it all on the loaded baked potato ($13) and asking for extra butter.

Or an extra cocktail. Most of the choices wiggle a bit too much toward the sweet, but the Frosé ($10) is refreshing on a summer day, and the bitterness of grapefruit takes away the treacle from the dubiously named Completely Naked & Almost Famous ($11). They are all boozy, so even if you don't enjoy it, you might forget your meal soon enough.

But I'm willing to bet you will. EastSide Tavern isn't going to win a James Beard Award and it probably won't make many top 10 lists, but it has all the conviviality of a church picnic (without the judgmental looks) and all the relief of a roadside stop. When you are having a few beers with your friends, that's plenty enough.