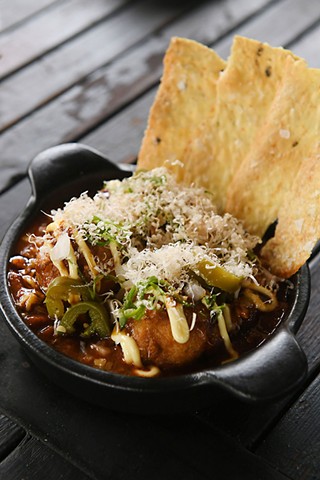 As Austin's once red-hot restaurant scene enters the second year of the Great Bummer, it would be well-served by keeping one of our nation's greatest history lessons in mind. It only took a few years to get from Nirvana to Candlebox. Just because you can come up with a couple of good riffs doesn't mean you can make a great album.

When Austin hospitality sizzled, a handful of talented chefs adapted a handful of national trends to our city's ethos, creating a culture that blossomed into a community. Over the last couple of years, that work has been cynically appropriated, the values of the previous generation becoming marketing slogans for the next. One can blame plenty of things for that – the chef shortage, the rents, the general flightiness of today's consumer – but really it boils down to Austin dining silly-puttying its way out of an identity.

So regardless of how successfully they could pull it off, Kemuri Tatsu-ya already had a leg up by attempting something with a real sense of place. I hesitate to call Kemuri fusion, especially since the word conjures up visions of ossified Southwestern eggrolls and unnecessary taco pizzas, but I suppose it's apt if you need a filing system. But Ramen Tatsu-ya chef/owners Tatsu Aikawa and Takuya "Tako" Matsumoto have come up with something much more personal than that. Kemuri is a biography of a restaurant, telling the story of their Texas upbringing, their deep connection to Japan (Aikawa was born in Tokyo and Matsumoto is a first-generation Japanese-American), even their careers as hip-hop DJs, while honoring the spirit of previous occupants Live Oak Barbecue.

Design firm McCray & Co. (Lenoir, Picnik, Noble Sandwich Co.) had the tough job of interpreting that theme, but their fierce eclecticism and color control finds order in chaos. A hodgepodge of American and Japanese metal signs (from Aikawa and Chris McCray's personal collections), hunting trophies, gimme hats, and license plates turns a literal and often trite idea – the collision of East meets West – into a lively conversation. The space somehow feels wholly Austin while being both redolent of the frenetic energy of Tokyo izakayas and the quieter, dust-layered history of Central Texas meat markets (particularly the frames-and-horns bricolage of Black's Barbecue in Lockhart). The back patio is calmer, owing much to clusters of bamboo (and a mid-spring breeze). 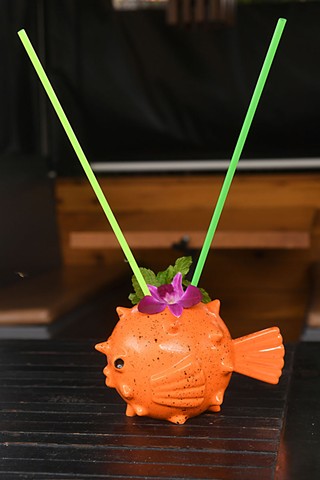 Regardless of the dining area, the atmosphere is loud and buzzy – owing a little to the fevered pace of service (which is charming even when they do scoop your plates up before you have had the chance to devour every last pickle), but mostly to the copious amount of alcohol (there's even a bar in the waiting area out front to get you started). You have seen the Puff Puff Pass on Instagram ($24), a tiki-ish rum concoction in a puffer fish scorpion bowl, and certainly will want to order it. But don't ignore the rest of Michael Phillips' (Midnight Cowboy) accessible beverage program, which includes saké, shochu, and Japanese and Texas beer and whisk(e)y. The cocktails find innovative ways to use Japanese ingredients in classics – matcha in a Painkiller ($13), a house version of canned milk tea in milk punch ($10), and Okinawan molasses in an Old Fashioned ($12) – without ever feeling gimmicky. 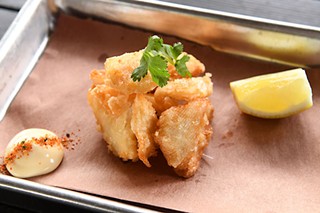 The menu keeps that balance going. I can't personally attest that weed had anything to do with the mash-ups on the menu, but the mere inference is as good of an argument for legalization as anything. But where most of the stoner gastronomy I have known has included some combination of Bagel Bites and Totino's pizza, Aikawa and Matsumoto have the benefit of a well-stocked walk-in. There is a nod to such microwaved feasts in the "Hot Pocketz" ($5), abura-age stuffed with brisket and Gouda and fused with a griddled wrap of sharp cheddar. Guaca-poke ($15) drafts tuna, pickled jalapeño, red onion, daikon sprouts, and wasabi into a mix that effortlessly melds both of its namesakes. The chili cheese takoyaki ($9), with a richly spiced chili, does a good job of approximating Frito pie, although I couldn't help but wonder if a cornmeal base instead of the traditional hakurikiko flour would have brought out the octopus' sweetness.

But the menu is far from being all flash. Aikawa and Matsumoto cull unexpected delight from the most basic dishes. Custardy dank tofu ($6) gets much of its oomph from the play of Gorgonzola and a sweetish soy glaze. The stronger natural flavor of dadachamame helps the edamame ($4.50) hold up to smoke. Barley miso aïoli keeps charred shishito peppers ($9) from feeling prosaic. And unexpected vegetables, especially mustard greens, invigorate the pickle plate ($6). Kushiyaki and yakitori run the gamut from bacon, potato, and goat cheese parcels ($4) to chicken chicharon ($3.50). Miso marinated scallops ($8) were especially essential.

No Kemuri experience should skip the separate chinmi menu, a collection of delicacies rated on a scale of funkiness that encompasses Kenny G, Bootsy Collins, Leslie Cochran, and James Brown. Squeamish eaters should probably stick to the crispy ray fin ($7) or the ray jerky ($6) – both served with Kewpie mayo – but armchair Andrew Zimmerns will be pleased by the tako wasa (marinated octopus served with fresh wasabi – $4), the monkfish liver (served with ponzu – $9) or sticky, nutty natto (fermented soybeans – $5). Shio kara – "squid marinated in its own guts" – delightfully avoids euphemism. Order it anyway. It is bracingly bright, a terrific palate cleanser.

I only ran into a handful of small personal quibbles over the course of my visits. I wanted more of the smoked fish in the crispy onigiri ($6), although I quickly forgot about that in the thrill of being able to use a long-neglected emoji. The barbecue boat chef's selection (served on a wooden funamoriki – market price) was satisfying but didn't quite have the electricity of the other dishes. By the time I got to the desserts (a simple pecan pie with a dollop of azuki bean whip and a banana pudding drizzled with miso caramel – $5), it was forgotten. But I suspect my coursing of the dishes had something to do with that.

The truth is that Kemuri could have put in a much weaker performance and it wouldn't have mattered one bit. The dinners were each full of the laughter and cheerful debates of people having a good time. It was a different noise than I heard at most restaurants this year, where the chatter veered far from the table. Here the diners were oblivious at their own groups, engrossed in their own worlds. Kemuri traveled to Lockhart by way of Tokyo, but along the way they rediscovered Austin. 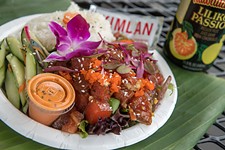