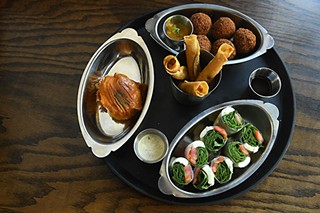 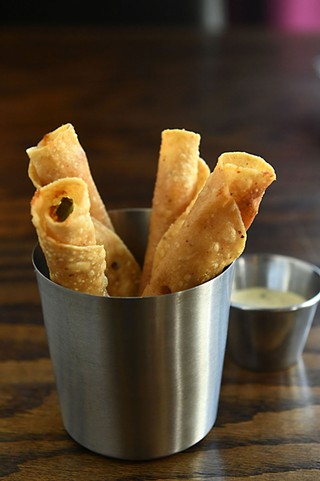 If we are gauging what makes a restaurant successful, I will always assert that the total experience matters much more than the food. If 30-odd locally sourced New American kitchens all put out a competent version of some roasted brassica or another, the details of presentation, ambience, cocktail program, and restrooms separate first and second tier. That's especially true in a smaller scene like Austin's, whose close-knit nature often yields an accidental sameness that reflects the homogeneity of the city. 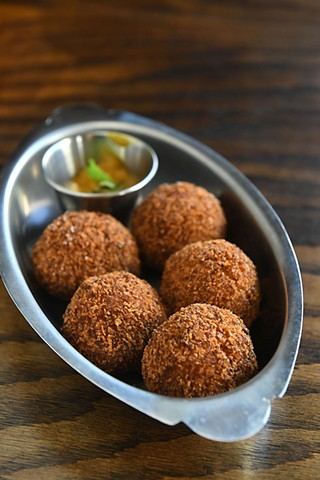 But the truth is that food and experience are rarely out of step. A chef who is obsessed about which Keith Kreeger plate she uses is usually equally obsessed with just what brassica she puts on it. It's rare to see a place that keeps its front and back of house so compartmentalized as Vigilante on N. Lamar's Midtown Commons. Of course, the gaming-focused bar is not the type of place that cares (or should care) about the provenance of its pottery, but it certainly aspires to be in that realm, talking the talk of culinary Austin (the cheese plate is Antonelli's, of course), even if the stylistic choices are suited more for Quotev than Apartment Therapy. 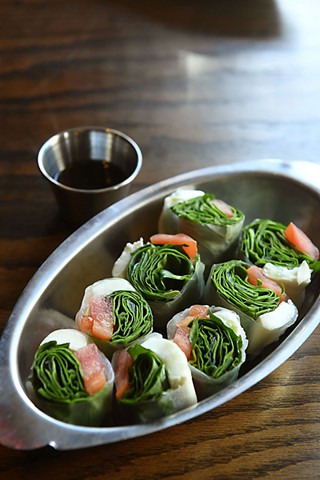 But it's obvious that the team behind Vigilante, led by Generation Y management consultant Preston Swincher, gave some serious thought to contemporizing geek culture. There's witty references throughout – from the "Accio Server" buttons on the gaming tables that throw out a Bat-Signal to the staff to the Crown Royal purple used in the velvet curtains – acting as Easter eggs to those in the know without feeling too insidery to everyone else. It's obvious too that the staff genuinely love gaming. That love translates to an experience that keeps gameplay in mind with custom-built tables, an intuitive touch screen game menu, and easy handheld food. Summing all the parts, Vigilante is a delight. 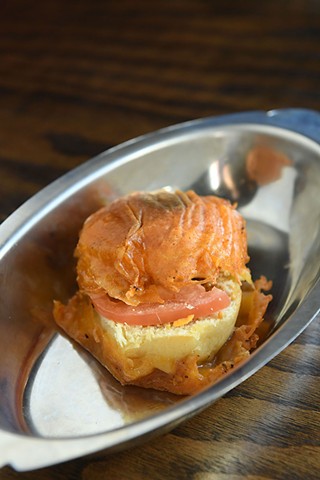 But I wish the food followed suit. I have little doubt that dinner at self-trained chef Derrick Hoang's house is a coveted invitation. It's clear from the wide-ranging influences of the menu that he has a passion for ingredients. But what works in the home kitchen doesn't necessarily work in a full restaurant, especially one whose main alcoholic focus is beer. There are plenty of fun ideas on the menu that don't quite translate. Take the elote taquitos ($7), served with a chipotle aïoli that is supposed to mimic the mayo and chile powder of the inspiration dish. But the dish doesn't really work without the brightness of lime.

From there, the menu continues in a series of near misses. The samosa croquettes ($5) had an agreeable Panko crunch, richly seasoned with an Indian yellow curry that is a reasonable substitution for the more classical garam masala. Unfortunately, lacking a binder, the fried parcels fell apart and were difficult to dip in the mango chutney. The caprese salad roll ($7) had its own dip problems. While I'm a firm believer that balsamic reductions should go nowhere near caprese (the red-brown color only looks at home on Il Tricolore during warfare), but when the salad is wrapped in rice paper I can understand the application. But the vinegar needs to be reduced to treacle to have any utility. And for God's sake, a tomato without salt is better left in the field. The Greek mushroom salad roll ($7), filled with a briny feta, made its case more effectively.

The sliders and satay erred in a similar vein. The Thai chicken satay's ($7) peanut sauce had kick, but the coconut milk-marinated skewers themselves limped. The chicken & waffle sliders had distribution problems, completely missing the first part in most of the bites. Cheese crisps seemed extraneous in the inside-out grilled cheese slider ($7.50), even if doing away with them would necessitate an elimination of the first three words of its name. And until I ate its namesake slider ($7.50), I would have never believed that pho could be dry (the herbs and jalapeños were missing off our order too – making it little more than a patty on a King's Hawaiian bun). It seemed like a missed opportunity. Why not go over the top with it, creating a "bun" out of fried noodles? It might not improve the taste, but surely would have people clamoring to order it for the Instagram likes.

But the thing is, I didn't care that I didn't like every dish. I would have still recommended Vigilante if they were serving Sysco tater tots. The total experience matters much more than the food, and that they have right. I would love to see a less complicated menu (fries are not a bad thing, guys), a more liberal hand with salt and spice, and a tighter rein on technique. I think that will come with time. You don't really notice it when you are shit-talking your friends over a game of Ticket to Ride. But it would sure be nice if you did.

See “The Game’s All Here” for an overview of the gaming program.