Where to go for an after-work drink

Where's the best place to go out for happy hour drinks with my work friends? We work by the Capitol, and I'm tired of being forced to go to sports bars. Help me find somewhere with good drinks and small plates so I can convince them to abandon their routine, because, frankly, I'm too old to live off Miller Lite and nachos.

The history of the happy hour in America is actually super fascinating. Although the term may have originated as early as 1913, and people have probably been getting blitzed after work since time immemorial, happy hour first became a big thing in America in the Seventies, intersecting with the rise of the women's lib movement. In homily decorated "fern bars" like your signatory TGI Friday's, women could kick off those confining pumps and throw back a few after-work lemon drops, which, if I've learned anything from Working Girl, was probably just what they needed after a day at the office. What I'm saying is that you're practically taking part in the matriarchal revolution by insisting your co-workers abandon their sportsball and hot wings ways, and for that I salute you. Plus, you're absolutely right that no one should be forced to drink light beer from a pitcher past the age of 24; it's totally uncivilized. You deserve a happy hour that will, you know, actually make you happy. Fortunately for you, this is a town full of low-stakes snack and drink spots of the highest order, many of which you can probably walk to from your office.

Just a few blocks away from the Capitol, the Salty Sow hosts what I consider one of the best happy hours in Austin. Everything on the menu is reasonably priced, and the cocktails are well-thought-out and not too sweet. It might be too fem for your sportsball-loving co-workers, but I'm a big fan of the sparkling sangria, which is only $5 a glass, and exactly as delightful as it sounds. But what you're really here for is the food. Since I'm assuming you're going with a fairly large group of people, you should do what I've always wanted to try on my visits: to sit at the bar alone with a book or one friend (my life is super exciting, you guys), ordering everything on the sharing menu. I mean it. EVERYTHING. Both kinds of fries, all forms of chicken (fried, moussed, and deviled), the weirdly addictive crispy brussels sprouts. It's all delicious; I am so jealous of you already.

American happy hour is supposed to be about excess, rewarding ourselves for participating in the soul-crushing machinery of the late-capitalist superstructure (told you I was fun at parties) by drinking ourselves into a minimal Wednesday morning hangover. This might work better in cities with a decent public transportation infrastructure, but Austin is a driver's city, and you are, presumably, responsible grownups interested neither in buzzed driving nor abandoning your Prius in the company parking lot and calling a Fasten. Culinary excess is more fun, anyway, and the only hangover you'll get is from excess sodium consumption. And it doesn't have to stop at the Salty Sow. Austin is, as I said before, riddled with increasingly sophisticated happy hour menus, from craft beer and $5 barbecue sandwiches at Freedmen's to parkside's half-off oysters and grassy whites. By making food the center of your happy hour planning, you'll be able to discover more of what makes Austin such a fun place to live: the wide variety of cuisines, the creativity, the glorious affordability of it all. And maybe invite me next time; clearly I could use more friends. 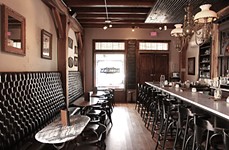 A Host of Historic Holdouts
Surrounded by the New Austin, these icons stuck around