The Difficulties of Dining With Kids

Is the restaurant industry making a bad situation worse? 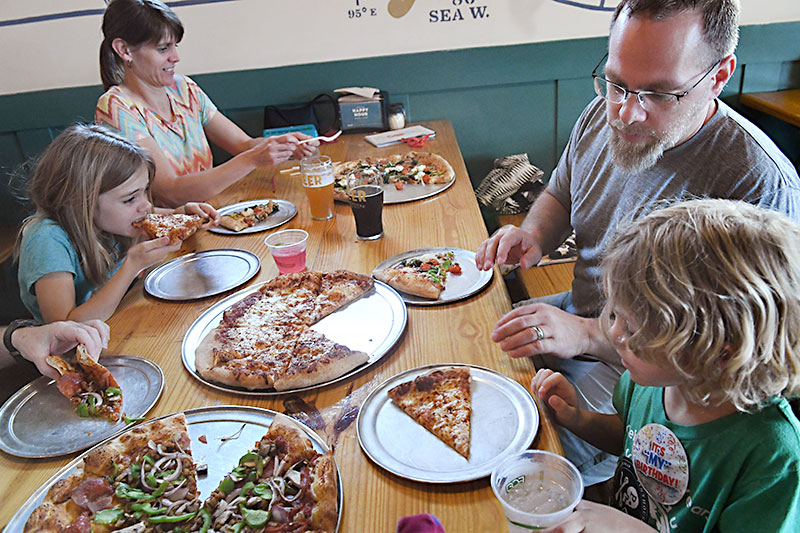 One Sunday morning, while trawling Twitter and nursing my first mug of coffee of the day, I scrolled past a missive from a single, childless Austinite: "Quack's at 8am on a Sunday is a kidpocalyptic nightmare." My immediate response was to unfollow this person, because if Hyde Park families can't go get a muffin at 8am on a Sunday without being subject to public criticism, when can they?

For people just trying to get a meal in peace, sharing space with rambunctious kids is likely a maddening experience. But for parents, it can be anxiety-producing to take kids out in public and hope that they step correct, which includes using both inside voices and utensils. When we take our kids out to eat, we're not just giving ourselves a pass on cooking; we're training their palates (ideally), and we're teaching them how to be in the world, including interacting with new people, sounds, and smells.

Every parent has a horror story about a meal out gone wrong. When our oldest child was a toddler, we were loudly scolded in a restaurant by a man who'd felt our son's happy sounds had ruined his late lunch. "When my two oldest kiddos were young, we were outside at the playground at Waterloo for lunch on a weekday afternoon," says local author Kari Anne Roy. "These dudes in suits sitting by the playground told me the kids were too loud. I was like, 'Oh, hey, maybe try having your business lunch not at a playground, you fools.' And I let the kids keep playing, even though I got all kinds of huffs and side-eye from the dudes who did not move."

“I think we could all work to see the other perspective a bit more and understand each other’s viewpoint and circumstance.” – Ned Lavelle, Pinthouse Pizza

Part of the problem may be that the restaurant industry as we know it, especially restaurants that cater to families, are conditioning us and our kids to expect some sort of entertainment, from full-blown playgrounds on-site to kids' menus that serve as distractions during the interminable wait for a plate of chicken nuggets.

In many ways, the innovation of the children's menu changed the ways that families move through public spaces, for better and for worse. Indeed, the children's menu is the story of America, from Manifest Destiny to the postwar baby boom to now more than ever, the importance of civil discourse, common courtesy, and empathy.

Michele Humes, writing in Slate, links the evolution of the kids' menu to Prohibition, when restaurants and hotels had to find new ways to generate revenue in the absence of liquor sales. Along with Prohibition came increased access to the public sphere for women, who, less bound to the ideals of the cult of domesticity, could dine in public without male chaperones, which meant that more mothers were taking meals with their children outside of their homes.

The children's menu really started coming into its own in the Fifties, as postwar prosperity and the rise of suburbia birthed a booming car culture. The 1956 Federal-Aid Highway Act connected major cities across the United States with an interstate highway system, and automobile travel became a national pastime. All of these American families traversing the country by car needed something to eat, creating a demand for restaurants offering convenient, economical meals that could be eaten on the go.

Americans dined out more than in previous generations during the Fifties and Sixties, and kids' items began to occupy their own real estate on dine-in restaurant menus as a result. A July 1969 Foley's Terrace Menu from Houston features a "Children's Specialties" section, including a chicken drumstick with mashed potatoes and gravy and "just a bite" of vegetables for 55 cents; a Satellite [peanut butter and jelly] Sandwich for 35 cents, and a Pixie Clown Sundae for 30 cents.

It wasn't long before kids were given their own restaurants. In 1977, the first Chuck E. Cheese's Pizza Time Theatre opened in San Jose, Calif. The brainchild of Nolan Bushnell, co-creator of the groundbreaking video game Pong, was born of a desire to introduce younger audiences to video games. Bushnell, who worked for Atari at the time, conceived of a family-friendly entertainment complex that included food, "live" entertainment (via animatronic characters including the chain's eponymous mouse), and an arcade.

Today's parents grew up thinking of dining out as entertainment, even if they're not taking their own kids to Chuck E. Cheese's, which may explain why so many diners find themselves bearing witness to interpersonal conflagrations in the restaurant space. Someone's child is running around the dining room, nearly tripping a server carrying a tray of hot food. A toddler is banging silverware on the table and china unchecked, rattling the nerves of everyone within earshot. Another kid is watching videos at top volume on their mom's phone, sans headphones. It's not uncommon to see parents who checked their duties at the door, turning the communal space of the dining room into a playroom and making everyone else around them miserable in the process.

It's such a rampant practice that when someone posted a screed on Austin Reddit in January titled "Pinthouse Pizza would be awesome if y'all stopped treating it like a daycare," hundreds of people chimed in with their tales of witnessing parents ignoring their children's bad behavior in favor of their beer/frosty margs/what have you.

"Ultimately we are about community and hospitality," says Ned Lavelle of the craft beer and pizza joint caught in the crosshairs of this debate. "Our community and our engagement with it is important to our team and owners. We want all guests to have a great experience with us. We want to support both families looking to go out to eat and those that just want to get a beer. I think we could all work to see the other perspective a bit more and understand each other's viewpoint and circumstance."

"The cornerstone of the restaurant is hospitality," says Rene Ortiz of Launderette, which offers a unique combination of chef-driven dining with a child-friendly ethos, from the Wikki Stix fun packs to the accessible kids' menu to those famous birthday cake ice cream sandwiches. "What we wanted to achieve with Launderette was a family-friendly neighborhood cafe that provides zero judgment. We provide hospitality to every individual who comes to the restaurant, from the smallest person to the biggest person."

That said, he continues, "you don't run in a restaurant. That's not etiquette." Ultimately, he says, it's up to the parents to teach their children how to behave in restaurants, to be respectful and smart and safe. "When my parents got out of church on Friday night, we would be at the taqueria sitting there going to sleep. But they were there talking, having a good time, having some drinks," he says. "Our parents taught us how to be respectable, to respect other people's stuff. Don't throw stuff on the floor, put a napkin on your lap. Same thing that I'm teaching my kids today: Be respectful. They need to grow up to be great human beings."

But in researching this story, I spoke to many parents of children with special needs, mostly kids on the autism spectrum or who are otherwise neurodivergent, whose experiences suggest that being a respectful human being is a two-way street. "I am mostly scared to take my kids out, because sometimes people assume kids with autism are just assholes," says one mom. "Our list of places we can go is Rudy's, Mighty Fine, and Jason's Deli. A few fast-food joints if we're desperate," says another mom of an extra-special kid. "We do not go anywhere that requires ordering from a server tableside, or anywhere that doesn't have outdoor seating." Another mom of an autistic kid says, "When the waiter scolds your ASD kid for reading a book at the table because it's too loud and you say, 'He's got autism,' they treat you like he's got the plague."

Ultimately, the debate about kids in restaurants comes down to mutual respect, something we're sorely lacking in our current cultural discourse. Perhaps, as we plan our next meal out – or even just our next interactions with human beings – we should take the advice of Kurt Vonnegut, who wrote in God Bless You, Mr. Rosewater, "Hello, babies. Welcome to Earth. ... There's only one rule that I know of, babies – God damn it, you've got to be kind."

A version of this article appeared in print on March 3, 2017 with the headline: Small Plates