Latest concept from Jack Gilmore is anchored in seafood 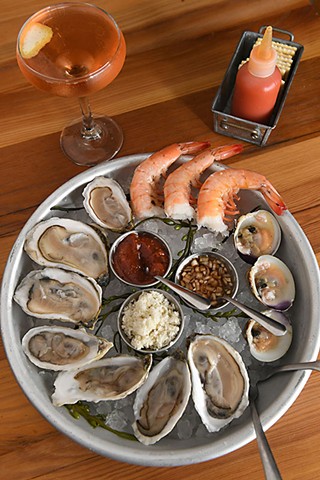 Jack Allen's Kitchen is celebrated for bringing quality dining to the outskirts. Over the years, co-owners Jack Gilmore and Tom Kamm have expanded his formula of bold Texan cuisine and family-friendly atmospheres into an empire. Branching out, the pair is ready to make a splash with their latest seafood-focused concept in Round Rock. 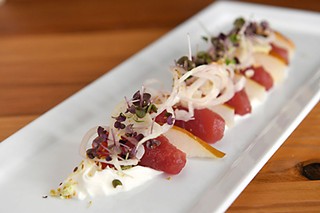 The inspiration behind Salt Traders Coastal Cooking spans the East Coast to the Bahamas, with a focus on the Gulf. Partnering with the Coastal Conservancy Association, the kitchen is committed to serving sustainably sourced seafood.

Walking past the host stand, my eyes were drawn to the backlit bar that curves around the center of the main dining room. Blue walls, light wood paneling, and upbeat background music create a breezy ambience. Still mindful that they're smack in the middle of a suburb, the owners chose a nautical-themed decor that is accessible without being overly cutesy. Keeping with a tradition started by JAK's pimento cheese, the energetic server offers smoked fish dip with house-made kettle chips as she outlines the menu. At first glance, its size is overwhelming and it's easy to become overly enthusiastic about appetizers, leaving little room for the main course. That later proved to be a welcome miscalculation.

But first, the drinks. Divided by "salt" and "no salt," the generally solid cocktail list takes a small leap from the classics. The Scratch Bloody Mary ($8) with a beer chaser packs a punch with barrel-aged Worcestershire, horseradish, garlic, celery salt, and clam juice. Gin & Bubbles ($10.50), an easy-sipping mix of Nolet's gin, lemon juice, and sparkling rosé is another fine brunchy beverage. Sadly, the egg whites in the Pisco Sour ($9) arrived deflated and separated. 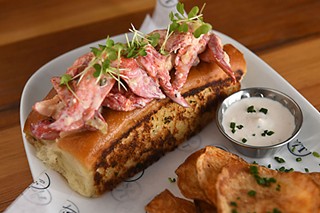 Executive chef Chris Ten Eyck captains the well-oiled galley, sending out food at an impressive speed. The raw bar features a handful of Gulf and seasonal oysters, peel-and-eat shrimp, and sashimi-grade fish. The fresh, cleanly shucked bivalves are served on ice alongside mignonette and a three-month Fresno pepper based "bull red sauce." That day, the salmon, tuna, and redfish ceviche ($10) was bright, refreshing, and not overly acidic, marinated to an ideal doneness. In contrast, the hamachi crudo ($12) was sliced in a way that resulted in a mushy texture, and sesame oil overpowered the Asian pear and crème fraîche.

At just $5 a pop, the juicy oysters fried in cornmeal and the tender snapper collar with crunchy cartilage are ideal bar snacks. Shrimp cocktail ($11) showcased plump, lightly cooked chunks swimming in a cocktail sauce that was sweet for my taste, even though the sugariness was tempered by chayote, cucumber, and avocado. The grilled oysters ($12) took me right back to the Big Easy. Highly smoky with dashes of Old Bay, the oysters were basted in a roasted garlic andouille butter. House-baked crusty bread was on hand to soak it all up. 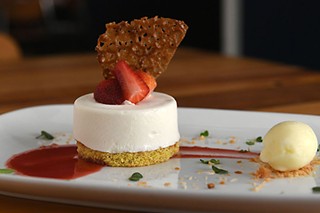 Like any classic seafood house, Salt Traders dedicates an entire section to soups and salads. Hitting all the right notes, the seafood gumbo ($6-9) is a time-honored marriage of a mahogany roux, shrimp, oysters, andouille, and okra: Clearly, they know when not to mess with a good thing. Likewise, served piled high on a chilled plate, the Caesar salad ($7) with white anchovies, a hyperbolic grating of pecorino, and crunchy grilled croutons was another American classic done right.

The transition from starters on to the mains brought us into rougher waters. The mayo-based shrimp & lobster roll ($19) was the most successful. The mountain of butter-poached seafood spilling out from the toasted butter roll was an easily satisfying combo. However, other entrées drifted off. The blackened cod in the enchiladas ($14) was entirely lost within the hardened corn tortillas, thick cheese, and heavily salted harissa cream sauce. The equally heavy-handed street corn salad needed a squeeze of lime to cut through the cloying flavor.

Fortunately, pastry chef Courtney Franke's desserts came to the rescue. With the denseness of cheesecake and the silkiness of frozen yogurt, the velvety coconut mousse ($8) easily held its own. Pineapple sorbet and toasted coconut took this tropical treat to the next level. The key lime pie in a coconut graham cracker crust, topped with toasted meringue, was a delightfully sweet conclusion.

Judging by its warm, hospitable service and generally well-executed coastal fare (with starters and dessert as the strongholds), it feels as if this young restaurant is lying about its age. With such a loyal following behind the Jack Allen brand, there was no reason for them to go above and beyond to bake their own bread or make hot sauce from scratch. The fact that they did shows the care in their craft. This care extends into their ocean-friendly sourcing, which wins them bonus points in my book. Although some of the entrées were still getting their sea legs, Salt Traders continues what Gilmore does best – providing quality, customer-friendly cuisine to the outer corners of the city. In the turbulent sea of Austin's hospitality industry, sometimes the best thing to do is to stay the course.