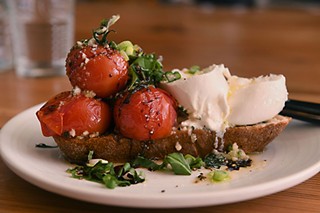 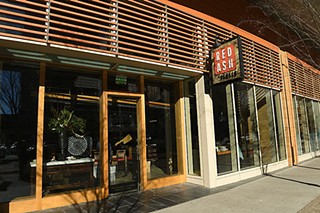 Sometime shortly after Dylan McKay asked his hairdresser at Visible Changes to blow-dry his quiff straight up from his forehead, we as a culture decided there was no higher aesthetic goal than being edgy. Since then, we've suffered from halters made from Calvin Klein briefs and Fall Out Boy and an outbreak of graffiti on restaurant walls. Sometimes it works but more times it doesn't, setting a tone that's as rebellious as a Brooks Brothers overcoat. It's probably fair to say that the vast majority of those privileged enough to be eating on a white tablecloth aren't picturing vandalism when they see a reminder to "make some trouble." So, it's discomfiting to see that scrawled on the dual story wall of Red Ash Italia, along with a magnified lipstick trace and a lascivious cartoon of Sophia Loren doing her best Amy Winehouse. (Or is it Claudia Cardinale?) Nothing else about the restaurant – from the otherwise staidly industrial dining room (by architect Jeff Stinnett and interior designer Janet Heinrich) to the hospitality CVs of chef-owner John Carver (who helmed the kitchen at Eddie V's) and partners Larry Foles and Guy Villavaso (the founders of Eddie V's, Wildfish, and Hopdoddy Burger Bar) suggests rocking the boat is a good thing. To be clear, I meant that as a compliment. After 2016's restaurant bloodsport (not to mention the shifting of the geopolitical order), we could all use a little more stability. So what if the entrées coming off of the wood burning grill and oven aren't innovative by any stretch? Familiarity and craft feel like exactly what is needed now. Fussier presentations and flavors may suit times of certainty, but right now we need lemon and garlic. The osso buco Milanese ($38) may be built in the same way as dozens of online recipes, but the execution – teasing the hauteur of saffron risotto and the naivete of gremolata – is so classical that provenance hardly matters. I'm certainly not accusing Carver of not having a voice, but he is certainly not the type to wedge a sunchoke chip in puree for its architecture. Simple ingredients star in dishes like the red snapper à la plancha ($32), resting in a basil slick studded with black olives and sliced garlic, lamb steak ($26), and pollo alla diavolo ($24), showing only a little hellfire with Calabrian chiles. And of course, there are also steaks – luxury steaks of the sort conspicuously bought by those seeking arrangements. But don't let the vulgarity of rich white men keep you from adding one to your bill. Our rare 16 oz. bone-in filet ($48) needed no embellishment. The smaller plates allow for a little more chefly flourish. Burrata is served with a cutting of vine tomatoes ($15), tender meatballs ($12) wade in a mascarpone polenta, and the tuna crudo ($15) unexpectedly adds olive to salmoriglio. But again simplicity yields the most success. The smoke in the shockingly tender grilled octopus ($15) is reinforced by pancetta braised white beans and humble celery gives the halibut crudo ($14) most of its brightness. The commitment to integrity of ingredients served the house-made pastas well, too. The wild boar ragu was lusty against pappardelle ($16 for a small serving), the slight gaminess tempered by shaved Parmiginano-Reggiano. Brown butter sussed out the sweetness from the capelletti's ($17 small) ricotta filling. 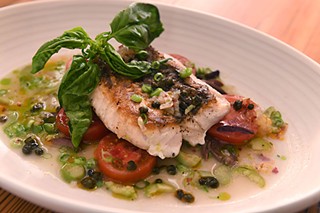 And then there was the glory of the bread ($2 per person) – a reason alone to visit Red Ash. I'll give it its own paragraph for daring just to be nothing more than garlic bread. I'll admit it didn't quite deliver the initial thrill by a third visit, but the best drugs tend to do that. Those prone to addiction should be advised that the fried, cream-filled donuts are a gateway too. They're described on the menu as coming with blackberry marmelatta and chocolate fonduta, but those are really just fancy names for dipping sauces. 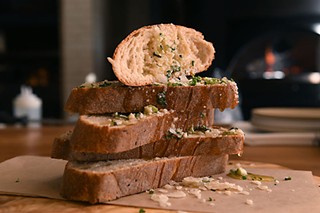 I was a little less blown away with cocktails like the lambrusco-based L'accademia, and maraschino and rum Havana 3am (both $12), which leaned a little sweet for my taste, but the wine list was comprehensive with affordable options in each category, and the beers on tap were varied enough for any mood.

Drink enough of them and you almost forget about that dang wall.