Like many plant-based operations, the Curcuma food truck uses the soft evangelism of its "About" section to make a case for eliminating meat and dairy, describing chef and owner Rachel Musquiz's "personal journey" switching over to ayurvedic and (assumably) vegan eating. The section describes turmeric, the rhizome for which the trailer is named, as a gateway herb – and it is as good an entry as any to what Curcuma does, showing up in voguish golden "mylk" lattes and ice cream. Even when not using its namesake, the trailer is very much on trend, offering activated charcoal black lemonade ($6 for a large), coconut butter coffee ($4), and a shockingly drinkable super matcha latte ($6) filled with all sorts of algae and cyanobacteria. 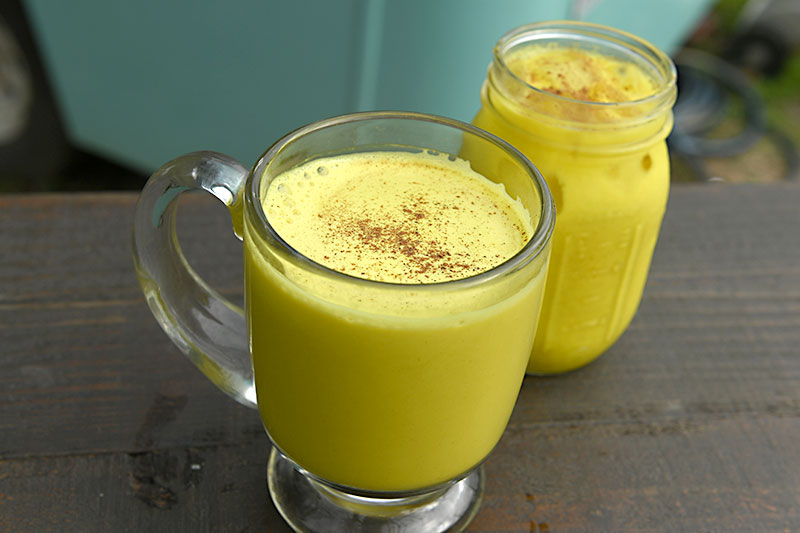 On the food side, the sweet potato "toast" ($8 for a three-slice sampler) is actually built on a longways slice of the tuber, and that can take some getting used to. In order to provide a rigid enough base, the sweet potatoes aren't exposed to too much heat, creating a slightly off-putting texture. It's a testament to Musquiz's palate that I largely forgot about that crunch midway through. Of the three varieties, the spicy avocado mash was the most effective, sticking to the guacamole foundation of citrus, pepper, and salt. But the milky cashew ricotta and the autumnally spiced cinnamon and coconut butter each have their pleasures, both relying on (light) salt and crunch – from pepitas and crushed pecans, respectively. Those are suitable for sharing along with an order of the filling rose tahini cacao truffles ($2.75) that feel like an indulgence even if they probably aren't. Still, the intersection between Curcuma's ayurvedic principles and Musquiz's craft peaks with the kitchari bowl ($10). Kitchari is most commonly a stewlike mixture of basmati rice and mung dal, made with ghee, seasonal vegetables, and various seasonings, contemporarily popular for mono-diet cleanses. Curcuma's version is drier than most, keeping the mung beans but replacing the rice with quinoa, creating something akin to the Buddha bowls that so effectively preoccupy bloggers. Cynicism aside, this bowl earns its hype by avoiding extraneous ingredients and garnishes. Everything has a purpose, from the chomp of the chickpeas to the snap of the massaged (ugh) spinach, and the dabs of flavor – a ginger chutney, pickled onions, sesame seeds on the avocado – make each bite distinct, avoiding the monotony of many grain bowls. Curcuma's kitchari is almost good enough to carry the entire menu, but it's probably for the best that they recently added a spirulina pesto zucchini-noodle bowl ($8) with cumin and radish to the list, and that the "coming soon" list promises even more variety. I'm eager to try the miso soup.