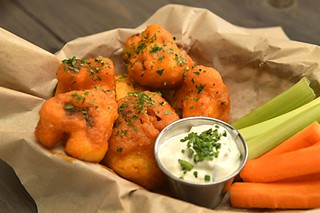 Undoubtedly the most surefire way to drum up a few negative comments on a Chronicle Food section article is to assign any sort of relative value – positive or negative – to a plant-based restaurant. There are plenty of reasons given for that disapproval, from a list's omission of certain eateries to disagreements on what constitutes vegetarian eating, but I suspect one root of the sensitivity has something to do with the constant barrage of snide remarks and bacon jokes aimed at herbivores, which surely inspire few yucks for those eating with a moral imperative. I can see how one might hold dear the few places around town that don't cater to such louts. 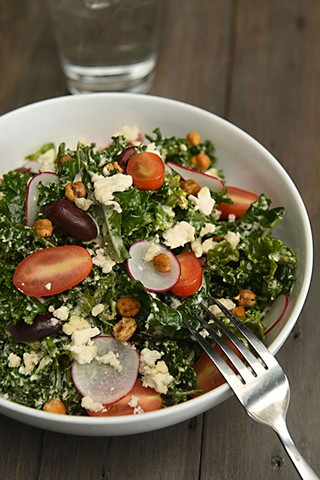 But one thing that has always vexed me is the fairly frequent suggestion that omnivores really shouldn't be writing about plant-based eating at all, or at least not from a critical perspective. The refrain usually goes that meat-eaters don't really know what vegetarians or vegans eat, so they have no business guessing at what they would like. Part of that may be true. I don't understand the tendency to mimic meat with concentrates and isolates or slather things with chemical sludge because it melts like real Cheddar, but then again I don't understand the tendency to replace gastronomy with chemistry when it applies to meat and dairy either. What I do understand is the bite of arugula, the way dill culls more freshness from a cucumber, and the sugar of a cashew. Salt, olive oil, herbs, pepper. That's all vegan. 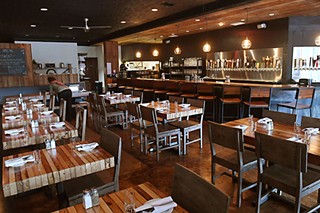 I had looked forward to eating at the Beer Plant precisely for that reason. Although chef Lou Mustachio's menu did feature the odd cheese and meat substitute, it more often used vegetables as vegetables. And it had a 30-beer tap, a full bar, and a location near my house. The stars seemed to align for owners Sarah and Ray McMackin's project. Not to paint with too much gloss, but my first visit was the worst dining experience I had in 2016 – by leaps and bounds the worst. It was the kind of worst that, for a critic, almost crosses over into damn good time. Much of that had to do with the staff, who were almost acrobatic in their ability to glide over our portion of the bar while tending to clusters of their friends (and at least one on-the-clock server) on either side. Even as those groups dissipated, the servers still took great care to avoid eye contact lest they be stuck with the deeply unfashionable task of recommending a beer at a gastropub. To get a server's attention at a particularly low point in the evening, I had to blurt out three increasingly sharp "excuse me"s. Even after that, the water glasses remained unfilled.

Still, I don't want to give the disinterested servers too much credit for ruining the experience when so many things were off that evening. The dining room smelled oppressively of peppermint (a server blamed that on Tarrytown's rarified air), the volume was set at a megaphone boom, and the lighting was set at Caravaggio. And then there was the Harvest Moon cocktail ($10), a drink that promised to taste of all the best ingredients in the Thanksgiving meal (cranberry, sweet potatoes, sage), but delivered all the tart, bitter unpleasantness of a blowhard uncle. Yes, I know, the Beer Plant focuses on beer, it's right there in the name. But everything included on a menu needs to be up to snuff.

At least the meal less assertively misfired. We started with roasted carrots ($7) and the Leaf & Spear salad ($12). The latter mixture of massaged kale (ugh), roasted garbanzos, kalamata olives, and radishes came vibrantly dressed in a lemony tahini dressing, but things went downhill from there, with the barely cooked carrots pulling off the unlikely feat of making harissa bland. From there, that was the theme. The HOPs & Chips ($13) have been lauded about town, including in this paper, but I can't add to that chorus. The oil-slicked hearts of palm wedges tasted tinny, and could have benefited from citrus, vinegar, and salt (the remoulade was not enough to save it). The Southern Comfort entrée ($14, but no longer on the menu) could have benefited from a deeper understanding of Southern cooking.

There is a reason why reviews aren't based on a single visit, however. Two weeks after the initial visit, every aspect of the experience had improved. The server perhaps needed a little more training (aquafaba certainly was not what made the flavor of the bleu cheese sing), but she was attentive and attempted no avoidal gymnastics. And while the time it took to get our drinks did test our patience (Seriously, what is going on behind that bar?), both the peaty Exposition ($14) and smoky Campfire ($13) were well-balanced. And a shelf holding linens was moved to not interfere with the atmosphere.

But the main improvement was in the food. This time we began the meal with the Ploughman's Plate ($9 for the small version), a vegan cheese board, and the buffalo cauliflower wings ($10). I wasn't wowed by the cheese, although the texture was remarkable, but the rustic house sourdough and accompaniments – pickled vegetables, a tangy tomato chutney, and a cultured coconut garlic butter – all earned their stripes. The cauliflower was an unqualified success, cooled by the aforementioned magic trick of a bleu cheese. The Reubenesque ($14) used the tomato chutney to great effect with portabella, sauerkraut, and caramelized onions on rye sourdough. And the tenderly crusted winter vegetable pie ($15) heartily warmed. The problem from before obviously was not with chef Mustachio's menu but the execution of it.

That inconsistency is a problem. Even the more niche vegan dining scene is becoming crowded, so every meal counts. The packed dining room and contradictory standards right now make the Beer Plant seem to be an employee's paradise. Once the novelty wears off, they will need to focus more fully on the customers.