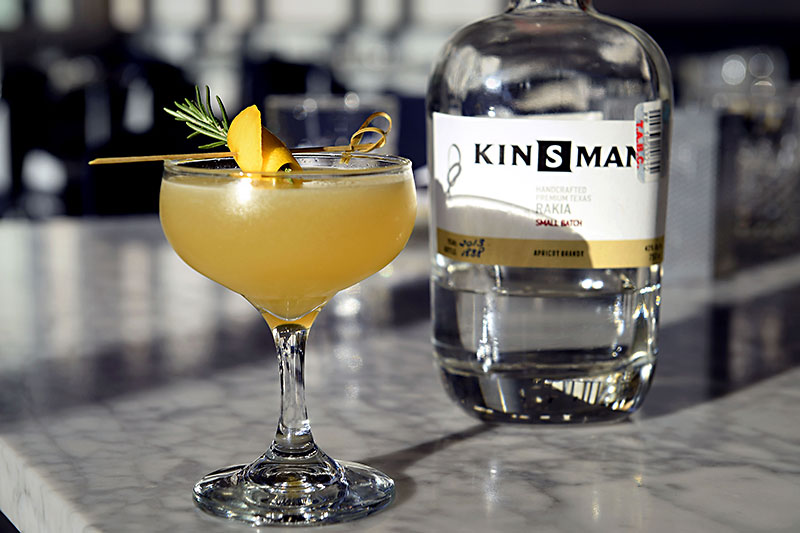 Repeat after me: "RAH-key-yah." Good! Now again – this time roll the R. For most of us, the traditional Eastern European fruit brandy requires an introduction and some education: a brief lesson in geography, a reminder of what exactly brandy is, or at the very least, the myriad ways to enjoy it. Fortunately two UT-Austin alums, operating a distillery 80 miles down I-35, are eager to enlighten us.

Dorćol Distilling Co. is Chris Mobley, a Lubbock native, and his college buddy, Serbian-born Boyan Kalusevic, whose family has been making rakia in their home country for generations. Kalusevic's 95-year-old grandfather, the family's O.G. winemaker and distiller, married a Croatian woman out of the war, and her family owned land on the Adriatic coast, upon which vineyards were developed in the Fifties. "If you were from the Croatian coast side, you did a lot of grapes," explains Kalusevic. "From inner Serbia, the countryside, you did a lot of plums and apricots. If you could find sugar in it, you made alcohol out of it."

Kinsman Rakia is Dorćol's inaugural product, a brandy made of nothing but apricots imported from a family friend's orchard just outside of Belgrade, which get fermented (aka turned into wine), and then double-distilled for a clean yet complex spirit that former Dorćol bartender Nick Kenna refers to as "vodka's much better looking sister." The entrepreneurs enlisted Kenna to create a craft cocktail menu that would help illustrate how approachable rakia can be. "That's something you've gotta show folks too, because they think it's going to be this sweet liqueur," says Mobley. "But it's turned into vapor twice!" he laughs. "It's not like flavored vodka," adds Kalusevic, trying hard not to roll his eyes.

Rakia is also nothing like cognac or pisco (both grape brandies – from France and South America, respectively) or Laird's Applejack, made here in the States. Just like whiskeys, brandies take many forms, each with their own nuances. The versatile liquor shines on its own (in the Balkans, it is traditionally sipped neat), but it is equally happy in a cocktail, both starring or simply performing a supporting role. "I originally feared that it'd be hard to keep the audience captivated with one spirit on the shelf," says Kenna, "but we've had great success with it."

Bartenders at celebrated Austin craft cocktail bars like Backbeat, VOX Table, and the Townsend are incorporating the clear liquor in stand-out recipes. Most will agree that it plays nicely with a variety of ingredients, but especially with citrus, spicy, and herbaceous notes. Above the distillery's modest 11-foot bar hangs a menu tempting patrons with their twists on classic cocktails, subbing the gins, bourbons, and rums for the award-winning fruit distillate. One batch of Kinsman Rakia did a stint in a smoker with apricot wood chips so they could play around with the smokiness you'd typically get from a mezcal or Scotch.

But the Texas Exes aren't the only ones experimenting with their product. The distillers were surprised to learn that their apricot brandy was flying off the shelves – of one neighborhood liquor store in particular – into the hands of Katherine Clapner of Dude, Sweet Chocolate who was using it in her wildly popular truffles. And a chance Instagram sighting revealed Kinsman to be a key ingredient in the San Antonio Marriott's crème brûlée. "There's this drinking renaissance that's happening," enthuses Kalusevic, as we discuss the cross section of cocktails and cooking. Mobley pours me a taste of the house-made strawberry-serrano cordial (for the effervescent Day & Night cocktail), and I try to think of when I last sipped any kind of brandy. The wave of brandy milk punches appearing on brunch menus crested circa 2011, if my memory serves me, and Busta Rhymes requested we "pass the Courvoisier" nearly 15 years ago. It's clear we're overdue for a sip.

Dorćol (pronounced “DOOR-chol”) is the Belgrade neighborhood in which Kalusevic was born, and the historic Roman trading-post town’s name is the Turkish word for “four corners.” Dorćol Distilling Company’s Kinsman Rakia Apricot Brandy can be found at the Austin Wine Merchant, most Twin Liquors and Spec’s outlets, and at several cocktail bars citywide.

A version of this article appeared in print on January 13, 2017 with the headline: Schooled Spirit