A Beginner's Guide to Marijuana Edibles 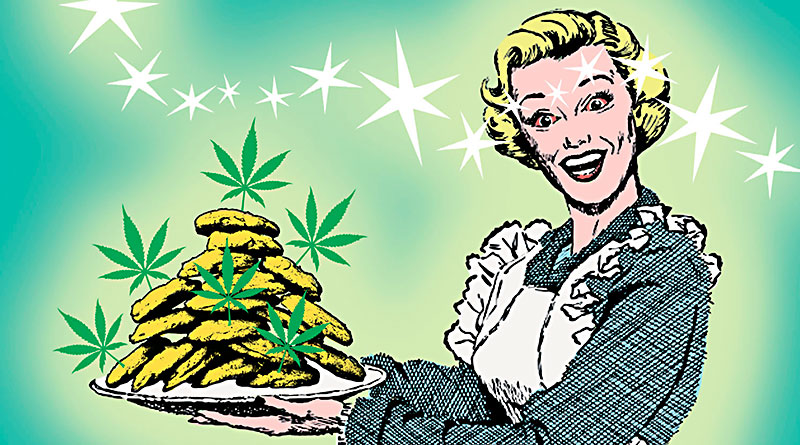 Sitting in post-holiday traffic, I covertly stared at the mom riding shotgun in the nearby sedan through my Judge Doom shades. The yin to my yang, she was visibly blissed out – seemingly unaffected by the hellish nightmare of I-35 on the day after Christmas or her carload of exasperated family members. I bet she has a secret stash of pot cookies, I thought. I bet she ate a pinch. Could I make an SOS sign and hold it up to the window, begging her to share? I couldn't find a pen, but I made a mental note for my next road trip.*

Is marijuana a vice? Sure, categorically, technically, definitively. But I'll never be able to comfortably call my go-to cure for anxiety, nausea, tension, and boredom an "immoral or wicked behavior." Over the course of my 20-year on-again, off-again relationship with weed, I've had pot brownies and THC lollipops and goo balls at festivals and parties. Most of that was when I was young and often otherwise inebriated. My metabolism then made all sorts of things possible. Now as a thirtysomething working parent with responsibilities, my habit has slowed down to the occasional puff. But watching Zen mom, I wondered if there was any room for edibles in my life. Even more, can I make them at home?

Edibles aren't just for hippies and cancer patients, but they're still the Wild West of marijuana consumption. The fledgling research on edibles leaves most of us wannabe pot eaters on the not-so-high plains. Labels are a hot conversation topic, and on dispensary edibles from say, Colorado, you'll often find instructions and dosage info. (This is not always the case. Right, Maureen Dowd?) But cooking magical treats at home has its own set of stakes. Different strains of bud, different preparation and delivery methods, and different brains can all manifest vastly different highs: body high, brain zap, or hallucinogenic slumber. Good things may come, but overdose, as with any drug – legal or not – is still possible. (You won't die, but you might convince yourself you have.)

Here in draconian Texas, marijuana is still an illegal substance, so I cannot assist with procuring your dried herbs, but I'll guarantee that you probably know someone who has the hookup. Give our legislative body just a little while longer to figure out how lucrative the biz is, and we Texans may finally be able to partake without prosecution. Until then, start a subtle conversation and read about current laws. When they go low, we'll still get high. And eating a cookie is a helluva lot less conspicuous than smoking a joint.

But what kind of cookie is the right one? Just as with pesto or beef Wellington, there are endless best recipes for green goodies ranging from classic brownies to pasta puttanesca. It's expensive to gamble with weed, so following the basic ratios and methods ensures a decent foundation for a customized edible high. The main thing to remember is that THC molecules in food must bind with a fat or an alcohol in order for the chef to capitalize on the psychoactive effects. Cannabutter or canna oil are the easiest bases for home recipes. Once mastered, the two techniques open up a world of experimentation.

Who needs a pen when you’ve made your own cookies?

For my first foray into cannabis cookery, I sent the kid to the grandparents and dove in headfirst with a half-ounce of a marijuana strain promisingly named "green crack," using a quarter-ounce to infuse EVOO and another quarter-ounce to make butter – both recipes modified from The Official High Times Cannabis Cookbook. For my experiments, I used a stove top method, but there are machines expressly made for both delivery systems, and I plan to investigate microwave-friendly routes as well. It took about 45 minutes of simple procedure to make either, but my experiments convinced me that the oil is much simpler. My cannabutter, despite frequent stirring and a constant watch, resulted in browned butter. It was still tasty, if less versatile, but the warm, pleasant scent will permeate the house for hours (hint, hint Yankee Candle).

Once you've made your oil or butter, the hardest part is deciding how to use it. Savory or sweet, scratch cooking or from a box, either can be used like their straight counterparts. I made scrambled eggs with canna oil for a no-pants television day, smeared cannabutter on toast for a wake-and-bake brunch, and then went full stoner – making Cheeto-crusted fried chicken. Whatever you choose to make, remember the first rule of edibles: Start small and go slow. And write shit down.

Like most edible eaters, most of my experiences are undocumented, save for fuzzy memories and friends' recollections, so I attempted to document one evening's story as part of my research. What came out was an emoticon-riddled, free-form poem written in shorthand Spanglish. For the delivery system, I used my butter concoction in a Krusteaz Meyer lemon cookie mix. The treats turned out more biscuit than cookie, but I'm not sure if that was a measurement issue or the weed butter itself.

Starting off, I marked the THC-laden cookies with an X and ate a quarter of one. Thirty minutes later, forgetting the first rule of edibles club, I ate another quarter. Within an hour, the headache I'd had prior to consumption was gone, but my legs had gone numb. Totally fine with this turn of events, I turned on Heathers, because when I'm feeling strange, Winona Ryder is my go-to ride-or-die. With my mind pleasantly mellowed and my body at one with my bed, I made notes for fiction I'd like to get around to writing. I pondered the working conditions of the factory that produced my ceiling fan. I wondered if sex on edibles is possible and if that includes another person and if that person must also be high. Completely stoned, I was acutely aware of my chapped lips and increasing thirst, but had zero motivation to remedy either situation. I could have slept, or not. I could think, or not. I could have moved, or not. The line between unconscious and awake was gloriously blurred. Who needs a pen when you've made your own cookies?

The last note I made read: "1234 yikes high," followed by a slanty face. Whether I was counting toward something, singing Feist, or referencing a timestamp, I'm unsure. Some eight hours later, when I awoke for the day, I might have been groggy, but it's hard to say for sure because I'm always groggy in the morning. The first thing I saw in the kitchen was the pile of dishes, and neatly stored cookies in Tupperware, and suddenly I found myself in the black and white Wizard of Oz farm scene, wishing for last night's full-color adventure. Still, the idea of partaking again was met with hesitation and I opted for a virgin taco instead, because there's no time for rabbit holes today. I've got a lot of shit to do. After all, I'm a responsible working adult parent ... now with something extra when I finally get some "me" time.

*Note: I certainly do not advocate driving under any influence, or partaking in mind-altering substances while caring for kids, but I will say the first time I heard the Rolling Stones' "Mother's Little Helper" after becoming a parent was a major "aha" moment.

A version of this article appeared in print on January 6, 2017 with the headline: Some Pot in Every Chicken An Intermediate's Guide to Marijuana Edibles
Now is the time to bake and get baked, in the comfort of home