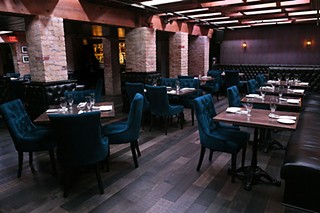 If a hospitality genie granted me three wishes, I would start with the request that restaurants stop trying to be so damn hip. Yes, I know, the industry is tough and the margins are razor thin. Anything that fires up the iPhone flash could make all the difference in a saturated market. But the search for hipness rarely finds it. At best, it can make a restaurant seem voiceless (to be fair, quite a few of those restaurants thrive despite that fact). At worst, it makes the restaurant look slightly desperate. Like Steve Buscemi going undercover as a high school student on 30 Rock.

At first glance, Sophia's – the Chicago-based BDG (that's James Brown, Matt Deichl, and Jonathan Gillespie) Hospitality Group's first foray into Austin – seems to escape those traps. The bones of former occupant Bess Bistro are largely kept intact, as is the imposing pewter bar. Designer Elizabeth Pena Brown (working with the BDG in-house team) fills the space with mostly timeless finishes, upholstering columns in black leather and chairs in sapphire velvet. The shapes are kept traditional too. There's nary a plastic shell in sight.

But wait. Suddenly Bess' original fireplace pops out to become a DJ booth, setting the scene for a Michael Bay-directed Night at the Roxbury. And the lighting changes color, making your burrata look slightly bruised. And before you know it, you are pushing tiramisu out of a plastic cylinder in the name of fun. You would call it a conversation starter, except you can't hear a thing over the music. Sophia's bills itself as a supper club, but sometimes forgets about that first part. And that's made all the more annoying because Sophia's needs none of the above. 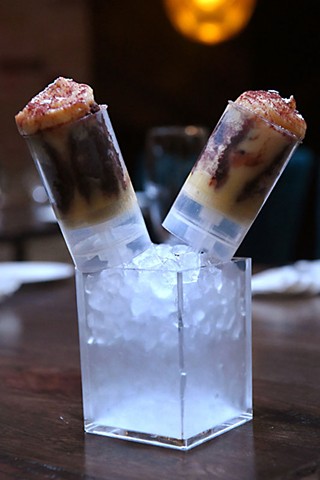 The flashy trappings certainly don't make much sense with the actual food. Despite the Italian restaurant explosion of the last couple of years, very few have fully dipped into the red sauce, which makes what Sophia's does feel fresh in Austin's small-plate swarm. Executive chef Mark Sparacino's menu avoids showiness altogether, sticking to honest, familiar ingredients with wide appeal.

To start, the boisterously named "The Meatball" ($15) is a wonder. More of a mini meatloaf, the moist round is topped with a sprightly tomato sauce and chiffonade basil. You can add burrata for an additional $3, but it is best with a dusting of Parmigiano-Reggiano. Marinated wagyu carpaccio ($18), served with a drizzle of good balsamic, and grilled octopus and calamari ($18) both appeal to more adventurous palates without alienating meat-and-potato types, the latter with a roast of tomatoes, beans, and red peppers. Those eaters will relish the brick chicken with fingerlings ($25), a handsomely crisped half-bird that doesn't challenge the diner in the slightest, but packs in far too much flavor to bore. The other standout entrées pull off that same trick – the sea bass ($35) through a balanced exploration of acid and brine, the chop ($29) through deep caramelization.

Sparacino's classicism shows in the pastas as well. None we tried were unsuccessful, but as a whole they do prove Mies van der Rohe's most famous maxim that less is more. The orecchiette tartufate ($25), for example, offers suitable luxury, and it is difficult to argue with a well-executed cream sauce. But the addition of truffle paste and oil muddles the dish and feels like a cop-out. Better to order the cacio e pepe ($19), which gives that same sense of carb indulgence with only a pat or two of butter and a shaving of cheese. The fettuccine bolognese ($25) does its job too, salted enough to have you reaching for the wine glass but not scraping your tongue. The capellini al pesto ($19), perhaps the kitchen's simplest dish (in contrast to the tagliatelle, the angel hair is not house-made), dazzles with an almost lurid amount of basil.

But things start to falter when savory gives way to sweet. In the drinks case, cocktails like the prosecco-based La Rosa and the unfortunately named rye-built Tracy Morgan Smash (both $12) are far too sweet, the treacle drowning any nuance. Stick to the thoughtful wine list instead, especially the Italian reds. And maybe skip dessert too (fine, order the towering chocolate cake [$15] if you must for a special occasion). Do so as a protest against gimmickry and ingredients that only exist for the benefit of Instagram (looking at you "edible" flowers). And do so to counter the belief that good food isn't enough. It is. Even without an ounce of oonce-oonce.