Paleo-friendly concept is virtuous but not holier-than-thou 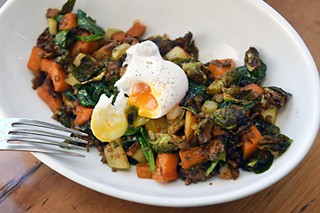 It speaks to a certain sickness in our society that we now place more faith into what we put in our mouths than what we put in our mind. If religion has largely been reduced to a buffet line, and science has been too polluted with the ingredients of belief, food now offers the rigor and ceremony left by that vacancy – the miracles promised far more astounding than a mere talking donkey. The problem is that once a diet is named, once word is made flesh, it falls into theological traps, allowing little room for nuance or exploration. Some things are indisputably good and some things are indisputably bad. One's worth as a person is determined by how strictly one follows those rules. It's no coincidence that we speak of food now in terms of moral imperative (do a Google search for Freelee the Banana Girl for the more entertaining side of that), and that veering off that path now creates the same guilt as failing to live up to a Commandment. Picnik, the brick-and-mortar version of the popular South Austin trailer, definitely plays to food cultists, but refreshingly avoids giving them a church. Although owner Naomi Seifter's specific food allergies were reportedly the reason for forming the business, there is a sort of food non-denominationalism at play. The menu by executive chef Dan Salivar and consultant Justin Turner eliminates gluten, corn, soy, and peanuts, and is primarily paleo-friendly (at least in the broader interpretations), but it doesn't strictly adhere to any one system of eating, offering a full range of options for everyone from vegans to Whole30 adherents. Perhaps because of all the various diets that the restaurant caters to, the servers are able to rattle off what goes into, say, an ice cream sandwich with ease, lifting the level of service.

Some lifting is done by the interior, too. The space resolutely refuses to look like a health food restaurant. McCray & Co. (Lenoir, Ramen Tatsu-Ya, Taco Flats), replaced the jewel tones of previous occupant Fork & Taco, washing the space in watercolor blues and cottage whites. The two sides of the restaurant are clearly delineated with a bookshelf advertising Picnik's food thought bona fides. The full-service side crowds in voguish Windsor chairs around a long, pillow-scattered banquette. The entrance area acts as a counter service hub and coffeehouse hangout (the various butter coffees are a draw even if one never dines there) with houseplants and marshmallow leather couches beckoning to bring them your tired, your poor, your allergic.

The ease was somewhat spoiled by a mini-plague of fruit flies on one visit, but once the spastic swatting subsided, it took little time to settle into the menu. With very specific rules in play, the food works best when kept simple. The harvest hash ($15.95), full of brussels sprouts, sweet potato, apple, pecans, and a poached egg, is dressed with a balanced maple vinaigrette. The fried brussels sprouts ($8.95) – topped with crisped pork belly and parmesan – and the beef stew ($12.75 – braised with green beans and potatoes – are both comfort classics. And the chicken tenders ($11.75), just that with a honey mustard aïoli, will appeal to more sophisticated kids or less mature sophisticates. The salads are solid as well, especially the Cobb ($16.95), which replaces the traditional red wine vinaigrette with a creamy dressing that splits the difference between Caesar and green goddess.

The breakfast fare meets the mark as well. Start with one of the rich butter coffees. Drinks like the candy cane mocha ($7.50) and pumpkin spice latte ($6.25) eschew the chemical sludge of similar beverages with essential oils and actual spice, making it hard to return to more commercial versions. The breakfast tacos ($6.25-6.95), made with Siete almond flour tortillas, are satisfying, particularly the well-seasoned chorizo version. The French toast ($12) indulges in a mixed-fruit jam and mascarpone. And the pastries taste like they give no consideration to health whatsoever – especially the blondie made with coconut sugar and almond meal. Tasty alone, it especially sung in the aforementioned ice cream sandwich ($6.95) made with Dolce Neve vanilla gelato.

Unfortunately, the kitchen was not as assured with the more complicated dishes. The exception was the shrimp risotto ($18.95), a luxurious mixture of butternut squash, asparagus, and cremini mushrooms scented with woodsy thyme. But other "marketplates" (assumably their word for entrées) were not so fully developed. Most of those stumbles were the type of thing that would simply be ignored if coming from the home chef, but proved somewhat irritating at Picnik's price point. The bulgogi lettuce wraps ($11.75), although a tad too sweet for my palate, let a pleasingly peppery ssäm sauce do most of the heavy lifting, robbing the dish of needed complexity. A longer pickling process for the daikon and carrot and some assertive garlic would have made the difference between a "meh" and a "hmm." Plus, the hot mixture wilted the Bibb lettuce and the jasmine rice was a touch dry, giving the dish textural dissonance. The catch of the day ($22.95 market price) – a black drum – had the benefit of a polished beurre blanc. That hid most of the dish's sins, including the overcooked, slightly rubbery fish, but the scoop of parsnip puree overpowered the milder flavors. On the opposite spectrum, it was difficult to suss out any flavor from the eggplant rollatini ($15.95) at all – the bland cashew/cauliflower ricotta filling zapping most of the finesse.

I suspect those details will improve with some time and stability in the kitchen. The flavors of the rollatini, for one, developed overnight and made great leftovers. While I'm not quite yet ready to throw up my hands and scream hallelujah, I do recognize that Picnik is a godsend to folks like my highly allergic mother or my celiac childhood friend. And they make one hell of a mezcal Old Fashioned ($11) should all that virtue get in the way. 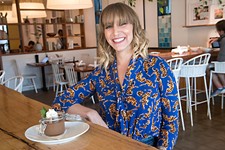