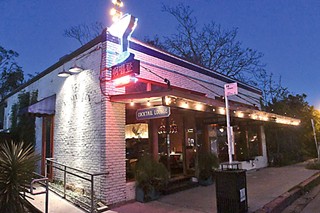 Longtime cocktail hideaway East Side Show Room's sudden closure this July came just as Austin's hospitality scene seemed to have hit the reset button. The first part of the year offered a dizzying number of restaurants flipping concepts, with some revamps greeted more warmly (Gardner to Chicon) than others (Mettle to Ophelia, and now to Trackside). East Side owners Mickie and Trudy Spencer swiftly got to work on a radical transformation of their own, changing over the former steampunk Creole-Italian haunt into Ah Sing Den, a cocktail bar and eatery inspired by a Victorian-era East London opium den. The mild Orientalism aside, the promise of Asian-inspired "tipples and morsels" certainly stirred my intrigue. But as usual when a new Asian dining concept sets sail – highlighting a continent of cuisines that have long been dumbed down in this country – my inner RuPaul warned, "Don't fuck it up."

Mickie's beautiful interior starts things off on the right foot, avoiding some of the more problematic aspects of chinoiserie. Plush vintage couches and armchairs, a de Gournay-esque peacock-themed mural by artist Jana Swec, and pops of colors and texture update the space, with a few touches of kitsch cutting through the fog. The atmosphere is cozy and sultry at first glance, but slowly, a lack of attention to detail peeped through – scattered crumbs on the seats, a dirty fork, a strand of long black hair on a napkin, and an accidentally dropped glob of food that remained on the table between courses. These slipups weren't particularly surprising given how oddly nonchalant the staff acted. Generally unconcerned, they seemingly carried some residual jadedness from the bar's past life.

Fortunately, the cocktails have their own stories to tell. Each beautifully balanced and innovative, the drinks were almost impressive enough to redeem the sleepy service. The Guyanese Sour and the Burmese Mission were standouts from the short list of seven house cocktails ($12-13). The sour's grilled pineapple and cayenne chile syrup wove through the aged rum's earthiness with zest and a pleasant slow heat. Citrus shines in the gin-based Mission, accented by herbal Thai basil and house-made clementine togarashi (a red chile pepper-based Japanese spice mix) syrup. The bar also prepares a handful of classics ($10) with care, which are a steal at $6 during happy hour. The trusty Old Fashioned, interpreted here with rye and raw sugar, deserves a special nod.

Likewise, simple but impactful brunch cocktails like the bold kimchi Bloody Mary (livened with roasted tomatillo and Asian mustard) and seasonal brunch punch (that day, a refreshing cucumber juice concoction with lime, vodka, and bitters) are no-brainers at $5 a glass or $25 for a pitcher. Sparkling saké delivers effervescence and body to the sophisticated Saké 76. An approachable selection of wine, saké, and beer also grounds the menu.

But if Ah Sing Den's cocktails are grownups, the small plates are still struggling with adolescence. The menu – originally created by Eberly executive chef Jim Tripi – rebelliously fuses cultures, combining Japanese soba with Thai-style curry ($9), or sandwiching Wagyu bulgogi brisket between gua baos (Taiwanese steamed buns, $12 for 2). However, textural issues expose some of the kitchen's flaws. The soba noodles were fall-apart soggy, while elastic bands of fat made the beef near impossible to chew. I imagine some Filipinos would be offended by the tasteless boiled pork ribs slathered with a sticky sweet relish they call "Filipino BBQ sauce" ($10). And their attempt to elevate "gyozas" with crabmeat resulted in a sad plate of shapeless, mushy dumplings ($8).

Still, among the many misses, there were some scarce hits. The bouncy shrimp balls ($9), wrapped and deep-fried in flat noodles, could have fooled any dim sum chef. Tuna poke – the trend food of the moment – was fresh, carefully dressed, and served with house-made blue potato chips. Though priced at $17, its tiny portion size was difficult to swallow. For brunch, On a Wing & Waffle ($12) showcased tender, tamari-dressed drumsticks fried in a light, crisp batter (even though the accompanying sweet potato waffles were disappointingly limp). The King's Cross ($14) surprised with crunchy, satisfying vegetable pancakes that were a cross between haemul pajeon (a Korean seafood pancake) and bánh xèo (Vietnamese crepes).

I crossed my fingers as each plate arrived because Austin diners are pining for accessible, reimagined Asian fare. But if the staff's blasé attitude was any indication, the bar's recent face-lift was not a fresh enough breath of air. On the upside, their excellent cocktails set a strong enough stage while the food requires time to catch up. Of course, their strategy may be in wooing diners to imbibe so many drinks that they simply forget about the food. In a town like ours, that may reasonably work. 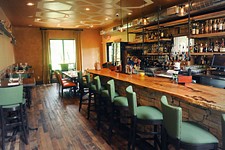