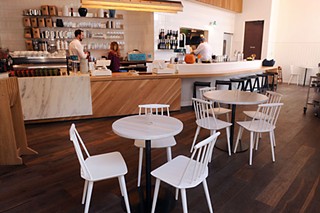 During my first few months in Austin, I often questioned if anyone in the town actually worked. On those occasions that I played hooky, the city was always alive during the day. If you went to any restaurant during the lunch hours, people would already be knocking back a few beers in shorts and flip-flops. Everyone seemed to have the luxury of lingering. 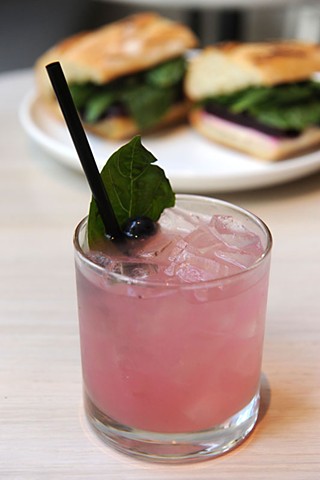 As the town grew, and the restaurant scene along with it, it always seemed like a missed opportunity that so few of those new eateries catered to that crowd. True, breakfast and lunch food tends to be prosaic – a chef seeking to make a name for herself probably is better served playing with chateaubriand than chicken salad. But the few restaurants like Counter Cafe or Noble Sandwich Co. that focused some or all of their resources on working hours seemed to always be greeted with a hallelujah chorus. 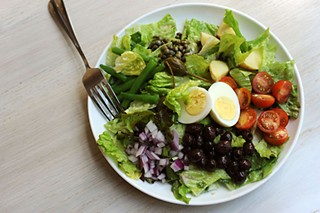 Maybe operating in the day feels safer in the clogged marketplace or maybe Austin has finally given up the pretense of the one-hour lunch, but we are finally getting some variety – led by out-of-towners like Snooze or Vinaigrette that have added booze to the mix, and by local hospitality groups like McGuire Moorman and ELM that have introduced all-day concepts. Forthright initially got some press as a coffee shop, but the concept now stretches to happy hour. 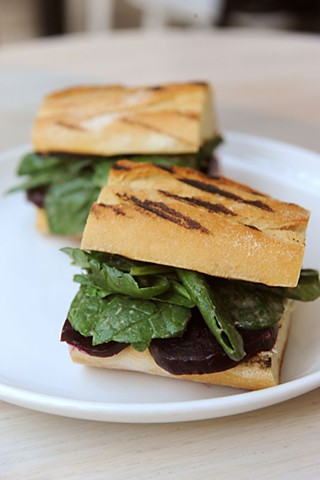 The space was very much tooled to daylight by the Michael Hsu Office of Architecture. Almost entirely white (textured tile, Windsor chairs, a marble counter, and acoustical panels), it avoids some of the grand gestures that the firm is known for. In quite a few applications, that sort of minimalism can come across as post-human, but in such a tiny space, it is a near necessity. To maximize possible covers, everything is shrunk (the host stand, for instance, can barely balance a menu). Depending on your preferences, this can seem too crowded, but the close proximity to the other tables does provide some communal experience and it's easy to chat up, say, a visiting couple from Tucson. 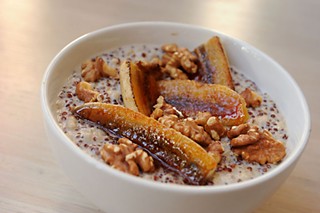 That's especially true at brunch where solid Bloody Marys and mimosas set the tone. Chef Ashley Neave (Peoples Rx) slightly reworks his breakfast of toasts and pudding/porridge/parfaits to encourage weekend languor. The quinoa brûlée ($8) can give you a mild shock depending on where you start. Dive into the quinoa/oatmeal mix without a stir and you are chapters deep in Charles Dickens; pull in the brown sugar and a piece of banana and you are suddenly in Danielle Steel. The chicken & waffles ($12) were nicely prepared with some heat in the batter. The accompanying salted caramel butter was delicious but needed to be brought up to room temperature. Even sans pork belly, the eggs Benedict ($10) worked with a vibrant hollandaise and dense house English muffins. 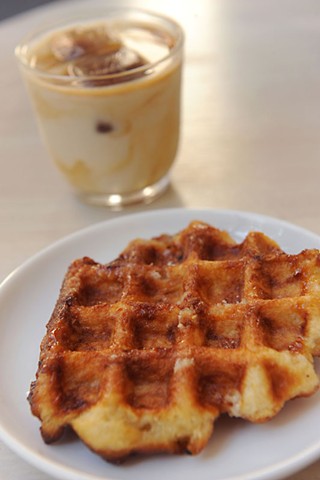 That affable simplicity continues into lunch. Any place operating in the sphere has to have at least one solid salad. Forthright has two. The kale Caesar ($9) doesn't particularly benefit from the stray pepitas thrown in the mix, but the leaves are crisp, the tomatoes are vibrant and the dressing sprightly. The niçoise ($9) likewise doesn't try to reinvent the form, but even in a grab-and-go clamshell – it never needs to. Only the super food bowl ($9), a salad gussied up with trendy nomenclature, faltered. The dish is beautiful with painterly arranged carrots, avocado, and candy cane beets, but the quinoa seemed undressed and bland.

The sandwich offerings keep to the classics, starting each with good, honest bread. A couple are misfires, like the veggie burger ($9) patty that was well-seasoned but was missing some sort of binder to keep it from falling apart. And I have never understood the allure of dressing a Caprese with balsamic, which masks the natural sweetness of tomatoes and makes the mozzarella look like a barely healing bruise. Forthright's sandwich version ($9) thankfully doesn't rely on it too much, but it would have been better dressed with only olive oil and a sprinkle of salt and pepper. But the turkey BLT ($10) reveled in its rustic mustard aïoli and bacon jam spreads, and the burger's ($9.50) cheddar and juicy beef was an American ideal. The croque monsieur ($10) was very nice too with rosemary adding a woodsy foundation to the bechamel. The fries ($2.50 extra) are a friendly bedfellow to any of the choices.

The solid food aside, Forthright does need to refine its service. In full swing, none of the cracks really show, but once the room clears out a little, the servers seem too preoccupied with sidework and closing tickets to properly monitor tables. That's fine for the type of leisurely dining a food critic does, but I suspect office workers trying to squeeze in some sustenance before a meeting might be a little more irritated. Reportedly, that played into some initial grumbling from the office workers upstairs, and certainly Forthright would do well to address it head-on. But there are still too few restaurants in Austin doing what they do well. Looking at the Pei Wei, Jason's Deli, and Wingzup that make up the Chronicle's close-proximity offerings, all I can think is I should be so lucky.