Food options for the post-festival crowd

I'm coming into town for Sound on Sound and looking to build an arsenal of good late-night dining spots, the greasier the better. Any suggestions?

When I was younger, I used to go to a lot of festivals. I say this both as a statement of authority (I know a few things about late-night post-show greasefests, and, you guys, I used to be cool) and an apologia (my idea of a good time now is more likely to involve starting with food and ending with a show; the food has moved up from secondary concern to primary occupation, obsession even, if we're being unkind). Basically, I have a lot of feelings on this subject.

It is my deeply held belief that the best late-night food is Sichuan hand-pulled noodles, ideally laced with thin slices of fatty pork belly and some kind of pickled vegetable, and doused with chili oil and black vinegar. This combination hits all the drunk-food sweet spots; it's carb-heavy, fatty, intense – and the probiotics from the pickled vegetables probably do something to help you metabolize all the booze and bad decisions. Plus, the broth is sneakily hydrating. Unfortunately, after spending an unreasonable time calling restaurants, and texting with some of my greedier friends, I was unable to locate a restaurant in Austin willing to serve you hand-pulled noodles at an unreasonable hour. (Readers, know any secret spots? Help a sister out and drop me a line!)

If you're willing to compromise on your definition of late night (or follow my example and bookend your shows with snacks), Julie's Handmade Noodles is open until 10:30pm and makes a mean bowl of beef noodle soup, a dense, umami gut punch of long-cooked bone broth striated with chewy noodles, which soak up the broth in their delicate little moon-crater surfaces, slipping from chopsticks to bowl like the tentacles of some delicious deep-sea beast. Plus, they're right by the UT campus and close to lots of the shows you'll be going to if you decide not to camp, making them a great mid-evening refueling stop.

If you're really set on the latest of the late-night model of festival snacks, you gotta go with a restaurant that's open 24 hours a day. Fortunately for you, Austin is a town full of erratic weirdos with erratic schedules, so there are plenty of options to choose from. I've already made known my love for 24 Diner (Chicken & waffles at 3am? Yes, please.), but if you're visiting from out of town, you're gonna want something a little more specifically Texan, aren't you? And that means Tex-Mex, and at the hours we're talking about that means Las Cazuelas, which stays open all night Thursday through Sunday so you can get breakfast tacos, burritos the size of a premature baby, and some pretty dank queso con chorizo if you wanna go native, at even the most uncivilized hours. As a bonus, you can wash it all down with a couple of tequila shots if you manage to drag yourself over to the Eastside before 2am.

But let's say it's the last night of Sound on Sound. You're due back in the real world tomorrow, have a long drive home maybe, or a flight that you'll miss if you make the mistake of going to sleep now. In that case, there's the indomitable local institution Mrs. Johnson's Bakery, which serves up fresh donuts and coffee from their factory location on Airport Boulevard between 9pm and noon the next day. Maybe there's no rest for the wicked, but that doesn't mean we can't eat well.

A Good Restaurant for an Awkward Conversation?
A place to say the things and eat the meatloaf 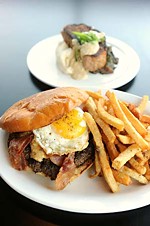