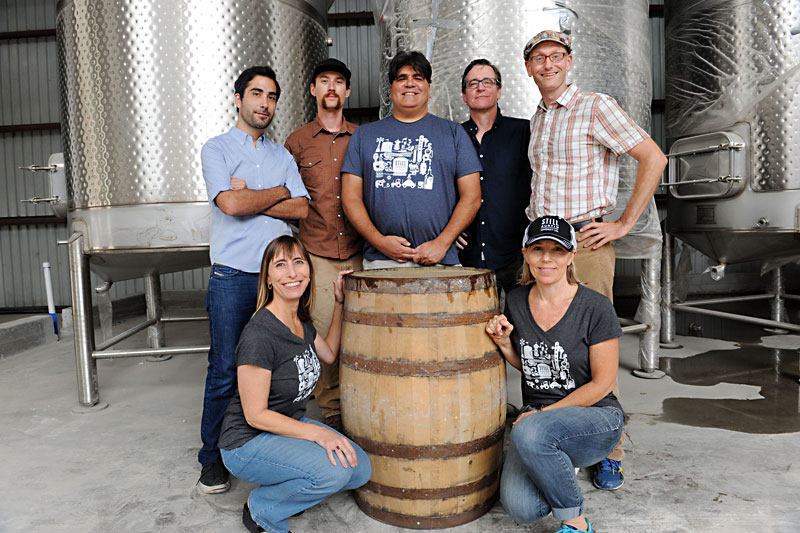 DIY may have long been a buzzword in punk rock and home decorating, but recently it has become a mantra in the food and beverage industry, where corporate Goliaths are increasingly being toppled by local Davids. But this new breed of entrepreneurs couldn't succeed without the support of a public who not only value their communities but actively engage in them. There might not be a better city in America than Austin to go out on your own.

The Yard – adjacent to the historic Missouri Pacific rail yard in South Austin – takes that spirit to heart, offering a mixed-use development that, when fully completed, will be home to a community of creative and collaborative businesses. Tenants like the Austin Winery and architects Drophouse Design have already settled in, and the coming months will welcome coffee roasters Spokesman and arts collective Raw Paw, among many others. Live music events and a food trailer park are expected to attract a lively crowd to the hub. And a trio of businesses – Still Austin Whiskey Co., St. Elmo Brewing Co., and the Soursop food truck are making their own way through Austin's burgeoning artisan food world.

"Before Prohibition, there were thousands of distilleries all over the country, and every little community had their local distiller," says Lisa Braunberg, co-founder and head of marketing for the upcoming Still Austin Whiskey Co. After the 21st Amendment was ratified, only a few operations survived and largely remain the big names in whiskey today. But following in the footsteps of the craft brewery explosion, small distilleries are popping up nationwide. "It's wonderful," says Braunberg of the upward trend. "Just like with beer, it floods the market with these amazing, innovative [varieties] you've never had before." Still – Austin's first whiskey distillery within city limits since Prohibition, and one of just a few "grain-to-glass" distilleries in the state – is proud to be part of that revival.

“We buy farmers’ grains, we mill them ourselves, we mash it ourselves, and we ferment, distill, barrel, and bottle all in-house.” – Lisa Braunberg

What exactly is "grain-to-glass"? Braun­berg explains that "we buy farmers' grains, we mill them ourselves, we mash it ourselves, and we ferment, distill, barrel, and bottle all in-house." This differs from the many other craft distilleries that outsource much of their production, and often purchase already-aged whiskeys, only blending and bottling before they call it their own. "We're sort of jumping in the deep end first," says Kris Bohm, the distillery's production manager, "to maintain better control of the whole process. To make a better whiskey at the end of the day."

The commitment to manufacturing and sourcing their product locally is part of a far-ranging vision. "Right now, we're sourcing [grain] from throughout the state," Bohm says, "but we're trying to develop those relationships with [Central Texas] farmers and say, 'Hey, we'd like you to grow 100 acres of corn for us next year, to feed the whiskey machine.'"

"It's hard to keep up with Austin drinkers!" laughs Braunberg, referencing the 20,000 pounds of grain that the facility will mill and mash each week. "We're really interested in bringing a regional grain economy back to distilling."

Sharing their knowledge and passion for their craft is just as important. The space will include a tasting room with a view down into the 45-foot-tall bourbon still that was custom-made in Scotland. Visitors can take a tour and then enjoy a cocktail in the outdoor whiskey garden. And for those wishing to take it one step further, there's the Distill Your Own Bottle program (DYOB for short). The company's six local founders – Braunberg and her husband Andrew, husband/wife Sal and Joanna Salinas, and father/son Cleveland and Chris Seals – all met during a weeklong class at a distillers' convention. "We're really excited about whiskeymaking," says Braunberg. "So we thought, 'Why not let others experience it, too?'" Although Bohm does warn that unlike making home brew, distilling alcohol at home is a felony.

Still Austin anticipates opening its doors at the beginning of the new year. Until that happens, no bourbon production can take place inside their walls. Thus, the first offerings will be not-yet-aged "new make" bourbon. It comes straight out of the still, clear in color – but don't you dare associate it with moonshine. Bohm acknowledges the reputation of the spirit "that's made quick, dirty, and cheap, and gets you drunk," but says that they're working on a trio of really great new makes that aren't harsh, won't burn, and incorporate locally grown ingredients for additional flavoring. "It doesn't have to be firewater," he assures.

As of now, the facility is a hard-hat, closed-toe-shoe construction zone. But even after construction wraps, the Yard will maintain an industrial vibe. "All these buildings have always had people in there making motorcycle parts, buses ... in the Sixties, Seventies, Eighties. Now new makers are coming in," says Braunberg, pointing across the lot to SUP ATX's custom paddleboard workshop. "We want to be part of the scene," she says, discussing the lengthy search for appropriate zoning that was central enough to allow them to connect with the brewing scene and the culinary scene. They were thrilled when they heard about the Yard. "Makers will always be in this area. We're just a new generation," she says. Bohm adds, "We're looking forward to people embracing us as the whiskey you drink when you come to Austin." 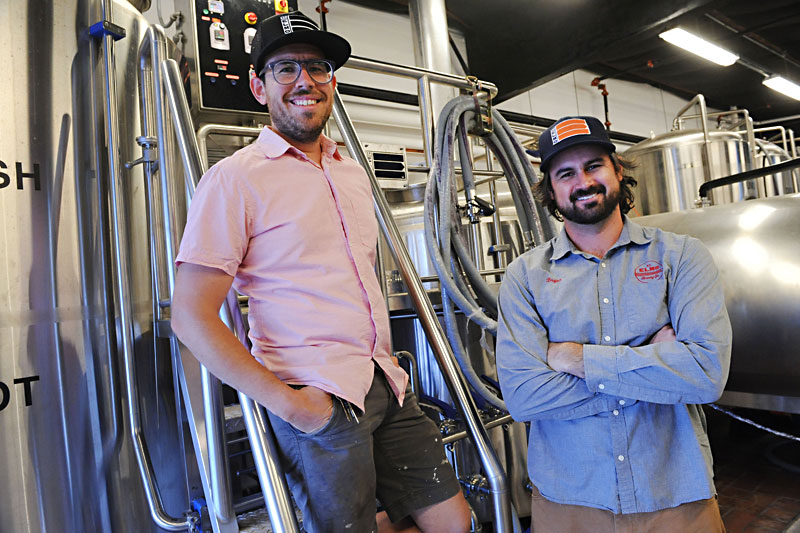 Bryan Winslow stands next door to Still Austin, on what will soon become the paved parking lot for St. Elmo Brewing Co. "Beer is the common-man beverage," he proclaims as we tour South Austin's newest brewery with fellow Austin Beerworks alum Tim Bullock. "We're doing it to be together." While the brewery's co-founders take their craft very seriously, "at the end of the day," says Bullock, "it's beer. You want to have fun."

Bullock will run the front of the house and manage events, staff, and tastings, while Winslow handles production. The brewery will open with five or six beers on tap, including three year-round mainstays (a crisp, German-style kölsch, a hoppy pale ale, and a dry, roasty stout). "We like all kinds of beer," says Winslow, explaining how eventually they plan to fill the tap wall with 10-plus different styles. "Pilsners and lager beer and farmhouse ales and kettle sours and English milds and double IPAs .... We want every beer drinker to come in here and find something they like."

The focus is the neighborhood, Winslow explains, which matters to freshness. “Our beer is never going to travel more than 50 feet.”

Currently, all of the brewery's output will be sold and consumed on-site. The focus is the neighborhood, Winslow explains, which matters to freshness. "Our beer is never going to travel more than 50 feet," he explains. The localized focus allows for a leaner operation than some of the breweries in town. Bullock says the bottling process requires a lot more equipment than St. Elmo uses. And the duo both note that it has become increasingly competitive to secure retail shelf space. "I can go to the store and get a Live Oak Pilz, a[n ABW] Pearl Snap, or a [Real Ale] Hans'," Winslow reflects. "And they're crushing it! I'll let them do that and we'll do this. We're just excited to sell beer in this neighborhood."

That same philosophy goes for handling food operations – best leave it to the pros. The pair knew they had found a good fit for a food component when they met chef Teddy Bricker, who was then working at La Condesa but ready to begin his own venture. Over the summer, Bricker began offering all-you-can-eat weekend brunches at Nomad Bar and staging other pop-up events, in part to test out recipes and run through operations. "Teddy made these ridiculously good gourmet wings one night," says Bullock of Bricker's kimchi buffalo, lemongrass pepper, and Thai barbecue wings. "It was the way Bryan and I both approach beer: It needs to be outstanding. It needs to really open your eyes to what flavors are supposed to be." Winslow agreed that it was a perfect match, and Soursop was appointed the brewery's resident food truck. 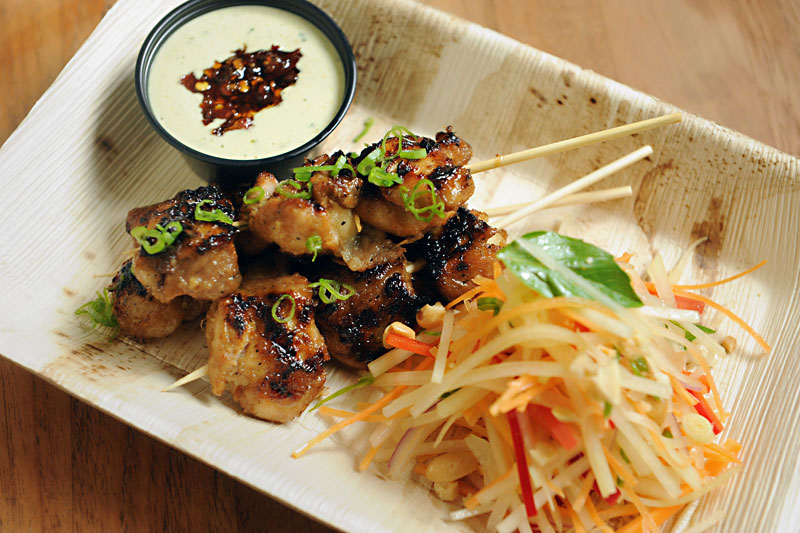 Parked in the outdoor beer garden amongst corn hole boards and a small stage for live music, Soursop will offer what Bricker calls "shamelessly inauthentic" Southeast Asian food. "We developed the whole concept around the foods I like to eat when I'm drinking beer," he explains. "Bold flavors, but not super heavy. A good balance of sweet/salty/sour/spicy." Sous chef Dil­lon Misonznick elaborates: "We use some traditional recipes, but they're presented in not-so-traditional ways," he says, citing dishes like the Pho-tine – a play on poutine using waffle fries topped with thickened pho-broth "gravy" and Vietnamese herbs. Ingredients like makrut lime, lemongrass, green curry, and tamarind are featured throughout the menu, and there's no shortage of pickled accoutrements. A charred-scallion aïoli garnered cult status after debuting at the Nomad brunches and will appear on the green-curry-buttermilk fried chicken sandwich.

There's a consensus that Soursop's food complements all of St. Elmo's beers, so patrons should expect a lot of collaboration between the two menus and thoughtfully paired plate-and-pint specials. "Teddy has talked to us about using our stout to braise his pork," says Winslow. "We're excited to sit down with people, talk about why the flavors go together," he says of the multicourse beer dinners which are already in the planning stages, "and just have fun. It's beer and ribs!"

St. Elmo joins several other breweries in South Austin, but, as Winslow points out, they are only open to the public during limited hours, mostly on the weekends. "We're really excited to be open six days a week," he says. "There are a ton of people who live around here, and we're excited to give them something else fun to do." With a slip of the tongue, Winslow reports that the brewery will be "hopening" sometime in October. After a good laugh, he acknowledges that's a true statement. So stay tuned, South Austin, and get ready to crack open a cold one.

A version of this article appeared in print on September 30, 2016 with the headline: Yard Art