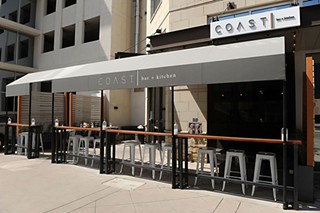 Memory makes a lousy decorator. As fresh as our experiences in rooms may be years, even decades later, our experience of rooms tends to ossify. It's not that we really care about some dusty clump of curly willow languishing in a corner, it's that that arrangement has always been there and if somehow it's gone, a part of you is gone. Better for those rooms to not even be lived in at all. I spent a lot of time at Mulberry during its seven-year run – brunches pouring rosé from porróns at ever increasing heights – getting more on my shirt than in my mouth – and afternoons downing a quick cheese plate and bubbles before dropping my best friend off at work. One New Year's Day, after a particularly heartbreaking breakup, I spent the late morning jammed in the corner booth, sniffling at first, but then slowly accepting the salve of barely tinted mimosas and shrimp & grits. By the end of the meal, I was helicoptering my skinny scarf above my head. I would save the moping for later. 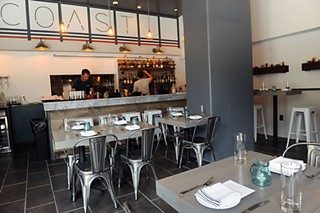 If you spent any time at Mulberry, it's near impossible to dine at Lion's Share Hospitality's Coast without seeing the trace lines of where things used to be. That formidable column is still in the way, but the warm wood wrapping most of the space has been pried and been replaced by a flat, if tasteful, gray and white. A small net was thrown out to the ocean, mostly in scattered sea glass blue votives and some HMS Home Depot light fixtures, but it's kept blissfully free of more on-the-nose references to the type of food served within the walls. It's hard to warm up to. To be perfectly frank, I hate it. Some of my best times were spent at Mulberry's marble bar. And now it's gone. 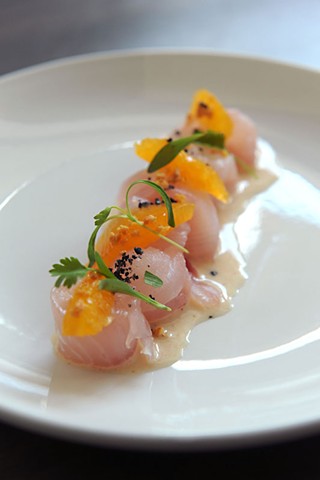 The thing is that I like chef Ruston Richardson's food for Coast much better than his food for Mulberry, or his previous gig at Paggi House – perhaps because he had to incorporate each restaurant's DNA when he took the helm. But Coast is his own show and he smartly keeps the menu as minimal as the decor – listing 15 or so offerings that are all about lightness and warmth. There are plenty of chefs in our town that wow with heavy proteins and other forms of surface decadence, but Coast takes a different track, one that suits Austin's temperate to scorching climate well.

That starts with a vacation peach salad ($11) with prosciutto, arugula, grilled corn, and a crumble of cotija that will make you wish Coast was open for lunch. Green tuna ceviche ($10), shimmying in avocado silk, is not a terribly new idea (see Rick Bayless' White house menu for Mexican president Felipe Calderón), but Richardson gives it some red onion bite that expands on the original form. Similarly, broiled oysters ($16 – but no longer on the menu) with butter, parmesan, and breadcrumbs may not have the power to startle, but the mojo de ajo drizzled on the top hoists the dish up far above the many leaden versions around town. The snapper crudo ($11) has a few more new ideas at play. A smoked salsa and blood orange supremes are expected here, but not the gloss of buttermilk. It works both land and sea and practically any selection from general manager Karina Lopez's wine list – something she approached with as much thoughtfulness as the welcoming front-of-house.

On the entrée side, the chorizo-spiked burger ($14) is solid and the New York strip ($31) is just fine for dad jokes and whiskey, but the seafood has the most thought. The scallops & pork belly ($20) is a tad sweet with maple polenta and apple butter, but the pickled strawberries mostly keep the dish from arriving at Candy Castle. The heart-shaped barbecue prawns ($16) are served with a jalapeño and corn puree that acts as a clever stand-in for grits or polenta. And the O.G. Plate's ($12) fish tacos were agreeable with their nice guajillo flourish and spongy corn tortillas, but the Catch of the Day ($19) easily shadowed them all. Chorizo infuses a broth that would have overwhelmed a fattier fish, but here it plays with the earthiness of oyster mushrooms and radish for an everyday triumph. Following that, dessert seems like little more than a fandangle. Dishes like the brownie sundae ($8) and churros ($8) are a pleasant afterthought, but you might as well end on the highest point.

And if I am still not sold on the room, there are plenty of cocktails like the black tea bourbon-based whiskey sour(ish) Alcatraz ($12) and a heady Fisherman's (ahem) Painkiller ($10) to start the convincing. It's probably best I throw out that skinny scarf anyway.