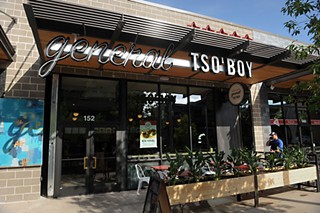 Besides the inevitable gut, the main hazard of eating for a living is that your palate tends to dull. After a third bowl of artfully arranged poke in a week, using words like "brightness" and "depth" to describe food tends to not have as much utility as a shrug emoji and a meh. Often, I need a reset.

This isn't perhaps a secret to anyone who has seen my Instagram, but I most often do that by being basic. Food folks tend to use that as an insult, of course – wagging our fingers like Katie Ledecky at the sludge that goes into pumpkin spice. But denying the immediacy of fat, salt, and sugar always seems like an act. The vast majority of Americans don't eat the processed foods of fast casual joints and microwave meals just because of convenience and price. They do so because they taste good.

So when I say General Tso'Boy's cheeseburger spring roll ($3) tastes like Hamburger Helper, that is not an insult. It just means that the snack has the same lick-your-plate accessibility as the childhood favorite. Likewise, when I say the crinkle cut fries ($3) are Ore-Ida standard, that just means that none of the crispy side will eventually be swept up into the trash. But fried in a wrapper or sprinkled with camphorous Szechuan spices (and using higher quality ingredients), the dishes become something else too: a rejoinder to the idea counter service shops have to play it safe.

If you can't tell by the previous examples or the punny name, husband and wife team Gary and Jessica Wu's New York pop-up turned Austin brick-and-mortar is a fusion restaurant in its most classic portmanteau connotation. Classic Mill-King soft serve ($3.50) is flavored with black milk tea, and sandwiches are served alongside sesame salads ($4-8) and simple stir-fried vegetables ($4). That's another risk. While almost every culinary trend has received a little side-eye after novelty gave way to ubiquity, none so deserved it as Asian fusion – a see what sticks approach to cooking that ofttimes has all the soul of a Venn diagram.

But somehow the melding of New Orleans and Chinese-American cuisines works here – perhaps because both were "fusion" long before we had the temerity to name them such. Tso'Boy fills Easy Tiger's unimpeachable bread with some of the most famous dishes of the Chinese-American canon, dressing everything in mayo and shredded lettuce. You can also get any sandwich as a salad of romaine, Napa cabbage, and carrots for $1 extra, but I find the fast casual urge to make anything into a salad irksome. If you want a salad, walk a few paces to Mad Greens.

Back to the bread. Even with prevalent soy, the char siu pulled pork ($8.50) tastes like something out of a roadside barbecue stand with a light sugar playing on the natural sweetness of pork. The advertised candied walnuts didn't register in the honey walnut (wild-caught Gulf) shrimp ($10), but were not missed. As it is, it transfers the crunch and creaminess of a fish taco to a roll, and that's hardly a cause for complaint. A slightly more generous squirt of mayo, however, would have eased some of the dryness. General Tso's chicken ($8.50) and breaded mapo tofu ($8) were both affable, holding the line with gentle heat, but couldn't hold up to the black pepper beef's ($8.50) pot roast succulence – a dish that doesn't read as much Chinese-American as universal.

With that sandwich being the exception, Tso'Boy's dishes are best when the Chinese-American seasonings are most noticeable. And that can change from visit to visit. On the first visit, the fries numbed the tongue with a heavy shake of peppercorn, creating a more exciting dish. On the second, the shake was mild, pleasing but somewhat pedestrian. I suspect the Wus are still tinkering with the formula and a milder spice is proving to be more crowd-friendly. And, yes, here I am tempted to sneer out "basic" as an invective. But here's to letting General Tso'Boy define their own terms.