Single-origin beans and hoppy IPAs without the drive 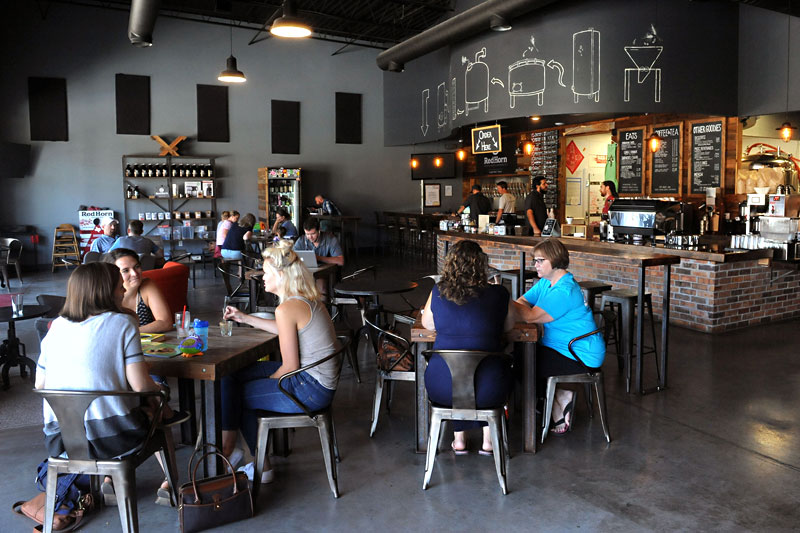 As Austin's geographic footprint has sprawled northward, some elements of the city's vibrant drinking culture have been slow to follow. Until recently, people who have been priced or family'd out of Downtown but are still thirsty for single-origin beans and hoppy IPAs have had to brave an hour in I-35 traffic. But that is no longer the only option, thanks to Red Horn.

"Our slogan is 'coffee, beer, and good vibes,'" says co-owner Chad Misner. "We thought that vibe piece was missing [in Cedar Park]. People get in here and say that it doesn't feel like a shopping center in suburbia. We spent a lot of time implementing a culture and a vibe that we like."

Part of that comes via hip furnishings from Five Built Design Co. and Doreck Design, but that's just the window dressing. The strip mall cafe really comes to life thanks to the coffee roasting machine and fermentation tanks that serve as both eye candy and a visual reminder that Red Horn is as DIY an operation as you'll find anywhere.

"We're not the first ones to do coffee and beer," says co-owner Jon Lamb. "It fit the mold of what was going on in the marketplace; the difference was Chad and I were going into the suburbs." Although there are several other cafes in the area that place equal emphasis on beans and brew, Red Horn is the only place in town ambitious enough to produce both in-house.

The caffeinated side of the operation is helmed by Misner and Lamb, who take turns manning a shiny red Diedrich roaster. They haven't yet delved into direct trade, but the lean size of their operation allows them to gamble on extremely small lots, primarily from Costa Rica and Ethiopia. 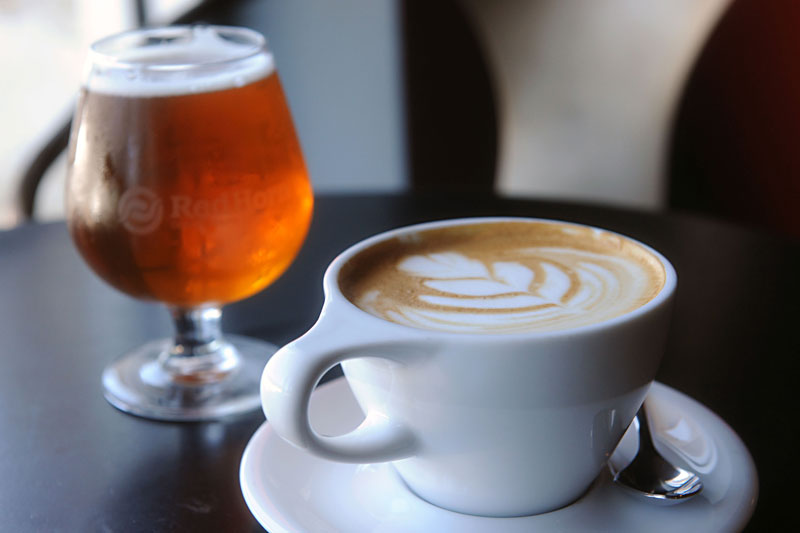 The nitro cold brew is a huge seller, with a portion of each 30-gallon batch sold on-tap at the Growler Bar in Pflugerville, Growler USA, and 4th Tap Brewing Cooperative. A third partner, Jared Hill, trains baristas on the espresso machine and pour-overs, with additional coffees from locals Wild Gift rounding out the roasted offerings.

Beer brewing duties are handled by Zack Gardner, who Lamb and Misner describe as "a 50-year-old brewer in a 28-year-old's body." Beers like their crisp, sessionable TrailRunner golden ale leave little room to hide the mistakes of a novice brewer. The menu of house mainstay beers also includes a malty brown ale, a 75 IBU (international bitterness unit – a common standard for measuring hops) IPA, a floral red ale, and their signature House United coffee stout, which uses six specialty malts and seven pounds of coffee grounds.

The seasonal beer menu features a Cascade- and green-hopped pale ale, a bready Hefe, and a coconut double-stout round, while 22 rotating, mostly Texas taps means there's always something new to try. And for those not willing to travel an hour's drive to test Red Horn's brews, their beer is now on 45 different wholesale accounts throughout the Austin area.

The group took an if-you-brew-it-they-will-come approach to building the shop's culture, but it quickly became a gathering place for some of the same scenesters you might see sipping espresso on the Eastside. By their third day open, a Lycra-wearing cyclist was outside at 8am downing a double-shot. He asked if Red Horn would sponsor his team, and now the cafe is a regular pit stop for members of Bat City Cycling on long tours.

And of course, where there's beer, there must be music, so the shop hosts bands on Friday and Saturday nights. They're not yet hitting the 143 capacity, but on a good night the room is packed and the parking lot features another favorite Downtown amenity: food trucks.

Although it's not like stepping out of Hotel Vegas and pounding a 2am cheesesteak, a nighttime visit to Red Horn makes for a suitable family-friendly alternative to Eastside debauchery. "As people's families grow larger, they need to move out of the Downtown areas where they lived," says Lamb. "But now that they're out in the 'burbs, we want them to still be able to experience what they used to love to do Downtown."